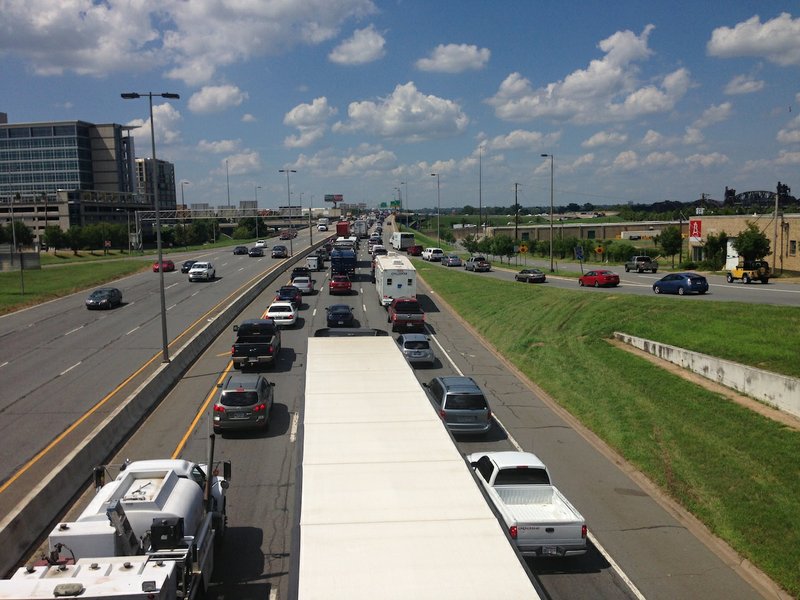 A proposal to widen the Interstate 30 corridor through downtown Little Rock and North Little Rock to 10 lanes violates a regional planning policy that limits freeways in the area to six lanes.

Will look at range of ideas for roads, Hutchinson states

The longtime policy, adopted by the Metroplan board of directors, limits freeways in a four-county region to six lanes until more money is invested in local highways and transit systems. The policy also is in place to keep money available for other transportation projects.

Because state road projects must adhere to Metroplan policies in order for federal aid to be available, an exception would have to be granted for the I-30 project.

The Arkansas Highway and Transportation Department says the project is necessary to ease congestion and increase safety in the 6.7-mile corridor. Among the options being considered is widening it to 10 lanes from the six it has now. The 10-lane option was recommended by the initial study of the corridor earlier this year.

The 10 lanes include six through lanes, with parts of the corridor having additional lanes to exit or enter other interstates and interchanges. Four additional lanes crossing the Arkansas River would segregate local traffic from through traffic.

The latest federally required planning phase, which will assess the environmental impact of the project and refine the interchanges and other elements of the corridor, mandates considering an eight-lane alternative.

Metroplan is the long-range transportation planning agency for central Arkansas. It includes Pulaski, Faulkner, Saline and Lonoke counties. The agency's board of directors includes mayors and county judges within the region.

Its long-range transportation plan would have to be amended to include the project. State highway officials say they are preparing an amendment, which likely will be ready after the first of the year, that would request that the project be made an exception to the policy limiting the region's freeways to six lanes.

The Metroplan staff on Wednesday briefed the Regional Planning Advisory Council, at its request, on how the project, now estimated to cost $600 million, would affect other freeways in the region, whether it fits with the vision of the region's long-range transportation plan and whether it would fit within the region's financial constraints.

A staff analysis indicated that by 2040, the improved corridor would attract more traffic and create more bottlenecks on other stretches of highway in the area, including I-30 west to West 65th Street, Interstate 40, Interstate 630, Interstate 430 and U.S. 67/167. Those highways would require widening that would cost an estimated $4.5 billion, the analysis said.

The need for some of the widening of other highways, staff members noted, has been assumed in the planning for the I-30 corridor project, though it is not part of the project.

Metroplan's long-range transportation plan doesn't include the widening projects that would be necessary if the I-30 corridor were widened, said Casey Covington, an engineer and planner for Metroplan.

The Regional Planning Advisory Council, which has more than 30 members from across the Metroplan area, will make a nonbinding recommendation to the board on whether the corridor project warrants an exception to the six-lane policy.

The region's long-range transportation plan long has contemplated the need to widen all the region's freeways to six lanes. Some planners have found that widening one highway can lead to the need for more widening, and "a decision was made to get off the merry-go-round," said Jim McKenzie, the executive director of Metroplan.

The region's plan is built on a "holistic approach" that recommends widening the freeways to six lanes but then finding other ways to manage congestion, such as by adjusting the standards of what unacceptable congestion is, encouraging people to live closer to their jobs or telecommute, and implementing high-occupancy vehicle lanes and other road-pricing strategies, he said.

"We're not asking to take the cap [on six lanes] off statewide," he said. "This is a very unique corridor. There's a lot of safety issues. We're asking for an exception here and realizing that there are down-the-stream impacts that we will have to look at it but which we will look at in the context of the relationship with Metroplan and [the council]."

Metroplan has approved an exception to the six-lane policy on the I-430/I-630 interchange project, permitting the widening of I-630 east from the interchange to eight lanes.

Widening the other freeways isn't a given, Browning said. Each of them will have to undergo in-depth studies to assess what improvements would work best, some of which could still fit within the goals of the region's long-range plan, he said.

Council members asked for more detailed information from agency staff members, including the cost of replacing the I-30 bridge over the Arkansas River, reconstructing the roadway and improving the interchanges with no widening. They also requested an assessment of the effect the project would have on the region's arterial network, a series of nonfreeway roads that often are four lanes and are heavily used.