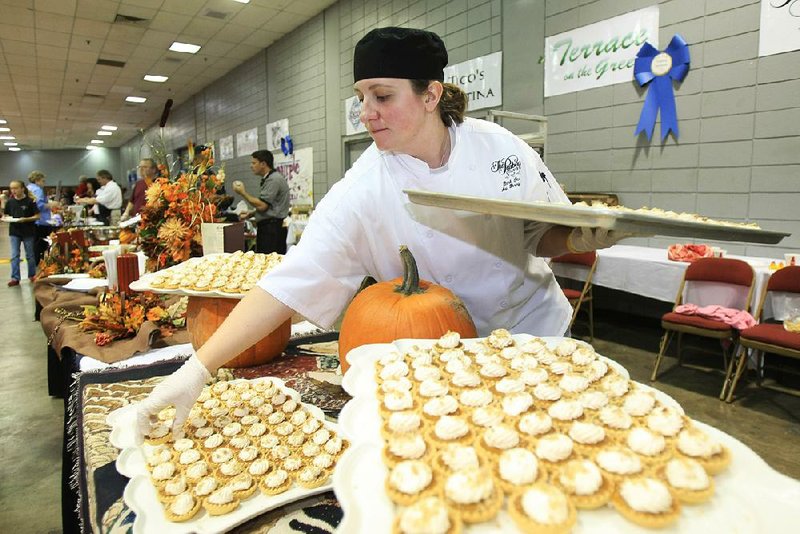 Nearly four dozen central Arkansas restaurants, restaurant chains and other commercial providers of comestibles will be providing food, drink and desserts for Silent Sunday, the annual benefit for the Arkansas School for the Deaf (this year's proceeds go directly to technology programs), noon-3 p.m. Sunday at the Statehouse Convention Center, Markham and Main streets, Little Rock. Todd Yakoubian and Janelle Lilley of KATV, Channel 7, will be the masters of ceremonies; entertainers include the GroanUps and the School for the Deaf's Singing Fingers. A silent auction will feature prizes from local businesses and baskets sponsored by the school's classrooms.

The Downtown Little Rock Partnership says a new food court, "the first of its kind in Little Rock," is pending for the intersection of Eighth and Chester streets and Interstate 630 in downtown Little Rock. According to the partnership's weekly email blast, "Owners of Station 801 will announce soon it's opening in late November. ... Plans are for four to five food trucks to be parked daily at the site for lunch, with indoor dining available offering large-screen televisions and free Wi-Fi." That would be, by our calculations (including the name of the owners, you see), the former gas/service station at 801 S. Chester St. "Food truck owners interested in learning more should email lrstation801@gmail.com." We also put in a query to that address, but had not received a reply by deadline.

Latest word in the Jerky's Spicy Chicken and More saga: Any optimism for an imminent opening at 521 Center St., Little Rock, created by the new voicemail message last week at (501) 246-3096, that detailed operating hours and a tag line pledging, "We look forward to serving you" ... well, that fizzled out when we checked the line again on Friday. By that point they had gone back to the previous voicemail message that has been proclaiming that they've moved but not yet opened at the new space, that "We're working hard and diligently to open this location," and recommends that customers keep checking the Facebook page and the Jerkys.net website for updates. Which, of course, we will continue to do.

We've found out that the family who own and operate the new Chopsticks Pho Vietnamese Restaurant, now open at 1400 John Harden Drive, Jacksonville, are the same folks who own and operate Pho Thanh My, 302 N. Shackleford Road, Little Rock. The menus are similar, but not quite the same. Hours in Jacksonville are 11 a.m.-9 p.m. Monday-Saturday, 11 a.m.-8:30 p.m. Sunday. The phone number is (501) 983-4279.

We're still trying to pin down a more specific target date (more than sometime in late November) for Lulu Chi's Cajun establishment called Lulu's Crab Boil, 5911 R St., in the former Haagen Dazs storefront in Little Rock's Pulaski Heights. But in the meanwhile, we ran across a couple more snippets of information, such as: The listed phone number, (501) 663-2388, was the Haagen Dazs number and still carries a "we're closing, thanks for your patronage" voicemail message from a young female Haagen Dazs employee. There is also now a website, luluscrabboil.com, still under construction (most everything is in that quasi-pseudo-Latin that they plug into web pages as place holders for eventual real copy). And buried deep within that site is the information that a second location is "coming soon!" We'll continue to keep you posted.

And Arkansas' first outlet of the Aliso Viejo, Calif.-based Johnny Rockets chain-franchise hamburger-shake operation, in the food court at the Outlets of Little Rock, 11201 Bass Pro Parkway, Little Rock, will kick off its grand opening celebration at 11 a.m. Saturday and they'll donate 20 percent of their first-day proceeds to Arkansas Children's Hospital. Local artist Lauren Meredith will be painting an Arkansas Razorback in ketchup and they'll be giving away meals for the first 50 guests in line and a grand prize drawing for an Apple iPad mini. Hours will be 10 a.m.-9 p.m. Monday-Saturday, 11 a.m.-6 p.m. Sunday. Check out the menu and more at johnnyrockets.com.