Journey of Hoga drawing to close 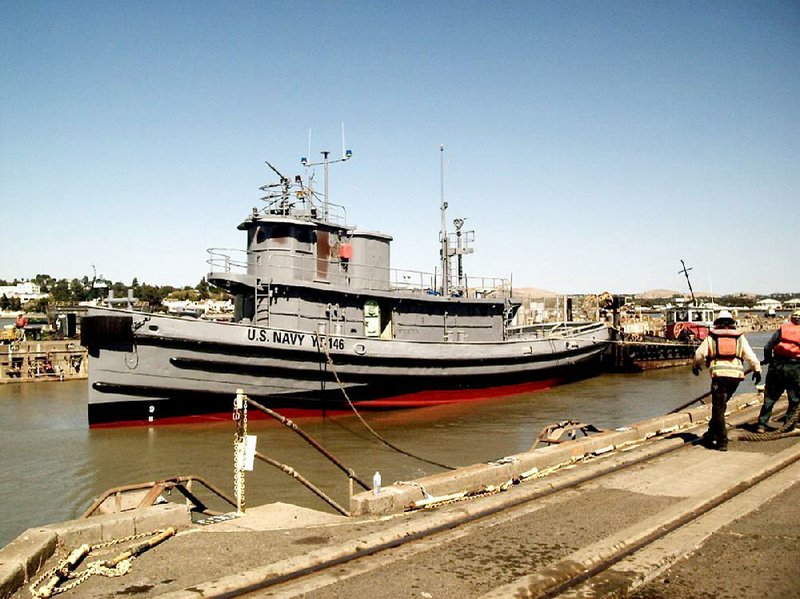 After a delay earlier this month, the USS Hoga tugboat is again moving toward North Little Rock, where it will join the USS Razorback submarine at the Arkansas Inland Maritime Museum.

Steve Owen leaned over to knock on a wooden table for good luck when asked if the historic tugboat Hoga will reach North Little Rock in time for a scheduled Pearl Harbor Day observance Dec. 7 at the Arkansas Inland Maritime Museum.

"We're feeling pretty good that we'll have her here by Dec. 7," said Owen, a board of directors member for the museum, who has been leading the Hoga's transport plans. "With all the rain, the rivers are up, so the tows are having to move slower."

The Hoga, one of two Pearl Harbor surviving vessels still afloat, has been on its way to join the Maritime Museum from the California coast since late September. It traveled on a cargo ship through the Panama Canal on its way to New Orleans, where it was to travel up the Mississippi River toward Arkansas.

However, a shipping regulation problem early this month diverted it away from New Orleans to Houston for almost a week, delaying -- and almost ending -- the Hoga's trip.

The Hoga finally did make its way by tow to New Orleans by last weekend, and it has been towed along the Mississippi River for the past week. By today, it is expected to arrive at Rosedale, Miss., Owen said Friday. The Arkansas River joins the Mississippi near Rosedale.

The boat's progress in the past week led to Owen's optimism that the Hoga will be present for the museum's planned Pearl Harbor Day observance.

"I hope so," Maritime Museum Executive Director Greg Zonner said Friday. "We have big things planned on the 7th. So we're hoping the Hoga is here by then."

The Hoga gained National Historic Landmark status in 1989 for its crew's firefighting and rescue efforts during the Dec. 7, 1941, Japanese attack on Pearl Harbor. The Hoga crew fought fires on the USS Arizona battleship for 72 consecutive hours after the attack, and the Hoga pushed the USS Nevada battleship away from blocking the harbor entrance, which could have been crippling to the U.S. fleet, according to historic accounts of the attack.

In 2005, the Navy awarded ownership of the Hoga to North Little Rock, over four other cities. The city plans to preserve the 100-foot tugboat as part of its Arkansas Inland Maritime Museum on the downtown riverfront. The only other vessel still floating that was at Pearl Harbor is U.S. Coast Guard cutter Taney, preserved in Baltimore harbor.

Once the Hoga arrives, the North Little Rock museum will have a vessel from the first day of World War II and one from the last day of that war. The USS Razorback submarine, which the museum acquired in 2004, was present at Tokyo Bay for the official Japanese surrender on Sept. 2, 1945.

North Little Rock officials and the museum board have tried for the past 10 years to find a way to move the Hoga that would be affordable and in compliance with the Navy's requirements for transporting it.

This month, the Hoga's journey was jeopardized because the cargo ship carrying it was alleged to have violated a federal maritime regulation involving the transport of cargo between U.S. ports under a foreign flag. The cargo ship, the Thorco Isadora, is under the flag of the Marshall Islands.

After days of negotiations involving museum officials; staff members of U.S. Sen. John Boozman, R-Ark.; executives at different shipping companies; the U.S. Coast Guard; and the U.S. Border Patrol, the Hoga was unloaded at the Port of Houston then towed almost immediately for about a four-day trip to New Orleans.

"A lot of people really came to the forefront to get her here," Owen said.

The Navy had required the Hoga to be loaded onto a cradle aboard a cargo ship instead of being towed from California because of the nearly 75-year-old boat's condition. Changing to a tow across the Gulf of Mexico from Houston to New Orleans was allowed under a clause in the museum's contract that transportation could deviate from the requirements "in emergency situations," Zonner said.

The transportation cost has been "probably in the $285,000 range," Owen said. However, that doesn't include any charges or possible penalties related to the Thorco Isadora delay, he said.

"There could still be some bills that will be coming in that we don't have yet," he said.

The board has been raising private contributions for years to pay for the Hoga's transport.

Despite the delay this month, "everything worked out great," Owen said in regard to keeping the Hoga moving toward North Little Rock. "Our No. 1 goal all along has been to get her here, but, especially, to get her here by Dec. 7.

"She won't be as pretty as we'd want her to be because we haven't had the time to work on her," Owen said. The outside of the Hoga had been previously refinished, but the inside hasn't been restored yet, he said.

The Arkansas companies are towing the Hoga without charge as a donation.

"When people have heard the story of what this little tugboat did at Pearl Harbor, they have really gotten involved in getting her here," Owen said.