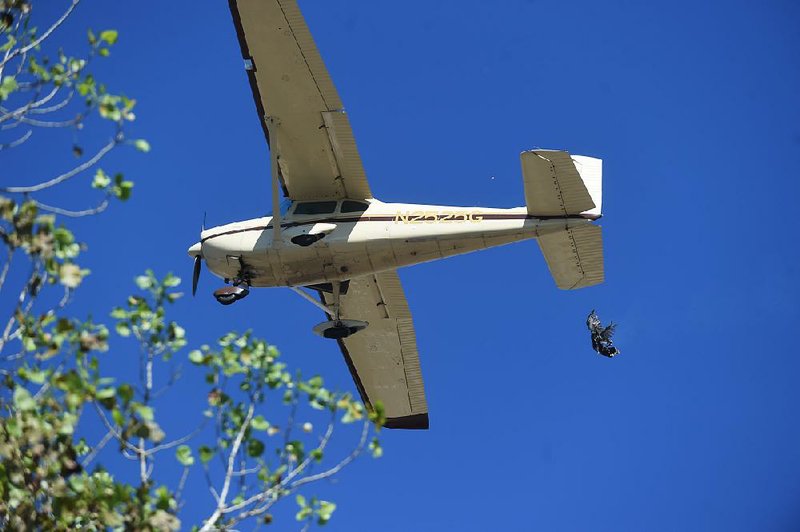 A wild turkey falls from a plane Saturday in Yellville during the 70th annual Turkey Trot festival, which hasn’t featured the tradition for several years because of Federal Aviation Administration regulations and complaints from animal-welfare groups.

Wild turkeys dropped from the sky in Yellville for the first time in years over the weekend.

While some landed in the general vicinity of the 70th annual Turkey Trot festival on the downtown square Saturday, others glided several hundred feet to the south across Crooked Creek.

For more than 50 years, the festival included a flyover turkey drop. But after a flap with the Federal Aviation Administration and complaints from animal-welfare groups, the plane drops stopped in 2011.

Since then, the turkeys have been dropped from the roof of the Marion County Courthouse, other buildings or from a stage in front of the courthouse.

Attendance plummeted as well, to about half what it had been when the birds descended from aircraft.

Lynn Lunsford, a spokesman for the FAA in Fort Worth, said Monday that the agency will look into the incident.

"FAA regulations prohibit dropping objects from a plane that can endanger people or property on the ground," Lunsford said via email. "This would include nearly flightless large birds."

Gemma Vaughan, an animal-cruelty caseworker with People for the Ethical Treatment of Animals, or PETA, said the group had reported the turkey drop to the FAA. Vaughan had previously said PETA would offer a $5,000 reward for information leading to the arrest and conviction of anyone dropping a fowl during the Yellville festival.

F. Dustan Clark, a Cooperative Extension Service poultry health veterinarian with the University of Arkansas in Fayetteville, addressed that question: "Yes they fly well," he said by email. "I understand they can fly a quarter of a mile or so."

A bit of mystery has always surrounded the turkey drop. Local newspapers reported that the turkeys were dropped by "The Phantom Pilot."

But Lunsford said the identification number from the airplane in Saturday's turkey drop appears readable on the basis of photographs in The Baxter Bulletin of Mountain Home.

That identification number, N2525G, traces to a 1959 single-engine Cessna 182B registered to Dana Woods of Mountain View.

A message was left for Woods at a pharmacy in Mountain View on Monday. Woods didn't return the call by early evening.

Ott said he saw five or six turkeys fall from an airplane Saturday, adding that it takes the birds a few seconds to get their bearings.

"They've got to get themselves uprighted to where they can flap their wings and fly," he said. "You don't want them flying the second they come out of that plane -- they might hit the tail of it."

Ott said three turkeys were also dropped from the roof of the Marion County Courthouse on Saturday afternoon.

Lesley Edmonds, executive director of the Yellville Area Chamber of Commerce, said she saw one or two turkeys "released" from an airplane Saturday.

"I don't have anything to do with that," she said. "Our function is to put on a festival. The weather cooperated, and we had great attendance."

Edmonds said she doesn't know how many people were there, but the festival sold out of its supply of 900 T-shirts and about 400 turkey legs.

Sam Pasthing, the Yellville city attorney, said he was at the festival and saw three turkeys dropped from an airplane, drawing delight from many onlookers.

"I have not heard/seen such a reaction from that crowd in a long time," Pasthing said by email.