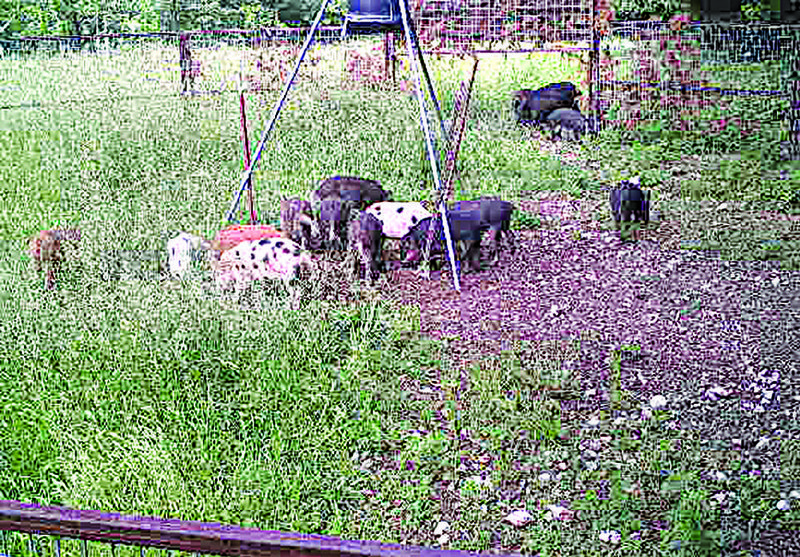 Feral hogs, usually nocturnal, feed during the day inside a corral trap in Morning Star. (Special to the Democrat-Gazette / SKIP ARMES )

For the past seven years, Don Smith has been fighting to hold his own against the feral hogs that swarm across his Desha County farm.

He's tried shooting them, but that only temporarily drives the surviving animals to neighboring farms. He's tried trapping them, but they get wise pretty quickly and start ignoring baited traps in favor of chowing down on his crops.

"It feels like you're not making any headway with them," Smith said.

Federal and state officials, who are working on the problem, say fast-breeding feral hogs are present in all 75 Arkansas counties. Wild hogs will eat almost anything, officials say, and their rooting and wallowing destroys plants, pasture and irrigation equipment. In addition, they compete with wildlife for food, disturb habitats and damage levees.

Bruce Holland, executive director of the Arkansas Livestock and Poultry Commission, agrees wild hogs are a menace to agriculture.

Officials estimate there are 200,000 feral hogs in the state, though they say the number is only a rough guess. It's even harder to determine the economic cost of the damage the animals do to agriculture, but one report, prepared by the Arkansas Game and Fish Commission in consultation with USDA, attributes "up to $30 million in damages" to Arkansas agriculture, forestry and livestock to feral hogs.

Wild pigs aren't new to the state. They have ranged over south Arkansas since the Spanish explorer Hernando DeSoto introduced them to area in the 1541, Hoy said.

Becky McPeake, professor and extension wildlife specialist for the University of Arkansas System Division of Agriculture, adds that Arkansas farmers let their pigs range freely well into the 20th century. The pigs were hunted when farmers were ready to harvest their animals, she says.

But, McPeake says, it wasn't until about 30 years ago that the feral hog population began to increase sharply and to spread across the state.

Hoy and Holland agree both developments were caused by hunters releasing the animals for sport.

Responding to complaints from farmers, the Legislature in 2013 made it illegal to release hogs into the wild. (In defining feral hogs, the statute specifically excluded animals held by accredited zoos and the "designated caretakers of the University of Arkansas mascot.")

A handful of existing for-profit hog-hunting facilities were allowed to continue to operate so long as they did not allow any hogs to escape their enclosed properties. On Friday, the Arkansas Live Stock and Poultry Commission began deliberations on whether to revoke the licenses of three hog ranches accused of allowing animals to escape.

It's legal to hunt feral hogs year-round on private property with the landowner's permission, according to the Game and Fish Commission, and no hunting license is required. Licensed hunters may take feral pigs in many of the state's public Wildlife Management Areas, but only during deer, bear, or elk season and only using weapons that are legal for the season, according to the commission.

Experts agree that hunting is not a generally effective way to control the wild hog population. A sounder, or family group, may include up to 30 individuals, and shooting one or two members of a group only makes the survivors more wary. Small traps and snares have the same effect, experts say.

"They are as smart as you or I. They're not just a smart animal," says Skip Armes, the UA extension agent in Searcy County. "If they recognize a trap ... you'll never see them again. You've educated them, and they'll educate their piglets."

Armes says he's trapped about 100 hogs over the past eight months and could have trapped 10 times that number if he had been able to devote himself exclusively to the job.

A corral trap that is 35-40 feet in diameter and comes equipped with a remote-controlled gate is ideal, he said. The challenge is getting wild hogs to enter any enclosure, even one that's camouflaged. Armes typically sets up cameras, puts out bait and waits to see how many hogs will come to feed. After he has an idea about the size of the sounder, he assembles the trap and waits until most of the hogs are comfortable feeding inside the corral.

Some hogs, especially older sows, will never enter the gate, Armes said, so he has to decide whether enough animals have gathered inside to make springing the trap worthwhile.

He does that by reviewing photographs sent to his mobile phone by cameras mounted on the enclosure. When Armes is convinced the time is right, he uses his phone to drop the gate.

The process can take days or weeks, Armes said, and it can require triggering the gate in the middle of the night, since feral hogs are mostly nocturnal.

Traps can cost between $1,500 and $6,000, Armes said, adding that groups of farmers could share the cost. In any case, he thinks an organized system of three to four monitored traps per county is the only way to control the state's thriving wild hog population.

Hoy stresses the need to capture entire sounders because of the hogs' quick reproductive cycle. A sow that gives birth in January can do so again in July and the females from her first litter can give birth for the first time in August, he says. Each litter typically has six to eight piglets.

"You can have incredible population growth," Hoy said.

Once a piglet reaches eight pounds, there are no predators in Arkansas capable of killing it, Hoy said, except humans. "And we're not very efficient."

Hoy said 140,000 of the state's estimated 200,000 feral pigs would have to be dispatched every year just to keep the population from growing.

Don Smith, who farms 3,800 acres near Watson in Desha County, doesn't know what the answer is but hopes one can be found soon. Early this year, he and his workers killed a few hogs and the rest stayed away until his corn was up. He put out a trap, he says, but the hogs ignored it.

"It was kind of a race there at the end to harvest that corn because they were getting worse as the season went on," Smith said. "They can get big, and the big ones eat a lot."