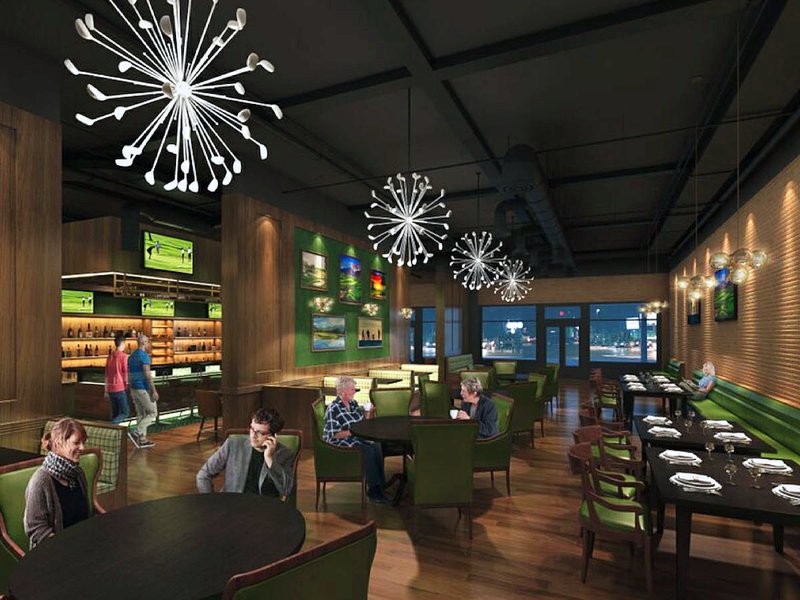 An interior rendering of the forthcoming John Daly's in downtown Conway by Taggart Architects of North Little Rock.

Kudos to my colleagues at the Arkansas Democrat-Gazette for breaking the news that PGA golfer John Daly, a University of Arkansas alumnus, is opening a new steak house in downtown Conway. John Daly’s has plans for a 5,000-square-foot restaurant at 912 Front St. to open in 2016. Project CEO Sam McFadin tells the Democrat-Gazette the restaurant will feature memorabilia and signature menu items relating to Daly’s golf career and personality. Daly is also planning to make five appearances at the restaurant over the course of the year. And this is just the beginning. McFadin says John Daly’s plans to open 10 locations in the next five years, including a possible spot on Dickson Street in Fayetteville. The Conway restaurant is going in the first floor of a building that will also feature four lofts and a patio space on the second floor.

After months of waiting, it looks like Jerky’s Spicy Chicken and More is finally set to complete its move from Arch Street to Center Street. Inspectors issued final approvals to the space after the construction project encountered some unexpected delays. Jerky’s announced the move in July and said in a Facebook post Oct. 16 that it is expected “to be open in a few days” at the location that used to house 521 Southern Café. Jerky’s serves up what it calls “Jamerican” food, a spicy blend of Jamaican and southern U.S. flavors. We were really impressed when we checked it out a little more than a year ago. You can check out their website and menu at www.jerkys.net.

It looks like Lulav is finally out for good downtown. The troubled restaurant opened, rebranded, closed and opened again over the course of a few years, and now the space belongs to a new tenant. Power Restaurant and Ultra Lounge actually opened earlier this year, coming in under my radar, and is doubling as a restaurant and performance venue. Power is open for lunch Monday through Friday with a daily plate special, as well as sandwiches and salads. Thursday through Sunday, Power is open from 9 p.m. until midnight, hosting live shows and dance parties. You can check them out at www.powerlr.com.

I guess I wasn’t the only one who fell in love with Richard Rogers’ New Orleans-style food truck this year. Rogers impressed me with his nontraditional beignets and Cajun food, and this week announced he is expanding his hours to serve dinner. Rick’s is now open Monday through Saturday from 7 a.m. until 9 p.m. on Country Club Road in Sherwood. Also, Rick’s has expanded the menu a bit, now offering crawfish cakes and barbecue pork sliders served on crispy beignets that have been cut in half. Visit www.ricksbeignets.com for the menu and contact information, though the business is more active at www.facebook.com/ricksbeignetsfoodtruck.

This one caught my eye, because who doesn’t love breakfast for dinner? Red Door restaurant in the Riverdale area has started serving “brinner” (that’s a combination of “breakfast” and “dinner,” in case you missed it) on Tuesday evenings. If you’ve never tried it, Red Door’s breakfast menu is pretty thorough, as chef Mark Abernathy and his team crank out omelets, breakfast skillets, benedicts, waffles and a slew of traditional first-meal items. But if pancakes at 7 p.m. doesn’t do it for you, Red Door still offers its full dinner menu on Tuesday evenings as well. Check out both menus at www.reddoorrestaurant.com.

Credit again to my friends at the Democrat-Gazette for this one. Lulu Chi, owner of Oishi Hibachi + Thai Cuisine and the Chi’s line of restaurants in Little Rock, is opening a new restaurant called Lulu’s Crab Boil in the Heights. Lulu’s will take over the former Haagen-Dazs space on R Street across from Fantastic China. Not much is known about this new restaurant, which doesn’t yet have a website or Facebook page. We’ll keep an eye on this one for you.

This is a project I’ve been excited about since it was announced. Former Sync employees Emily Van Zandt and Arshia Kahn and others have been working on a cookbook for Arkansas Life featuring chefs from around Central Arkansas. The Modern Arkansas Table will be released at a launch party at 6 p.m. this Thursday at Loft 1023 on Seventh Street. Many of the chefs featured will be at the event, including Jack Sundall from The Root Cafe and Kelli Marks of Sweet Love Bakes. Tickets to the event are $50 and include a copy of the cookbook. Find tickets at www.themodernarkansastable.com.

Have a restaurant or retail tip that belongs here? Let us know! Email your tip to steve@syncweekly.com.