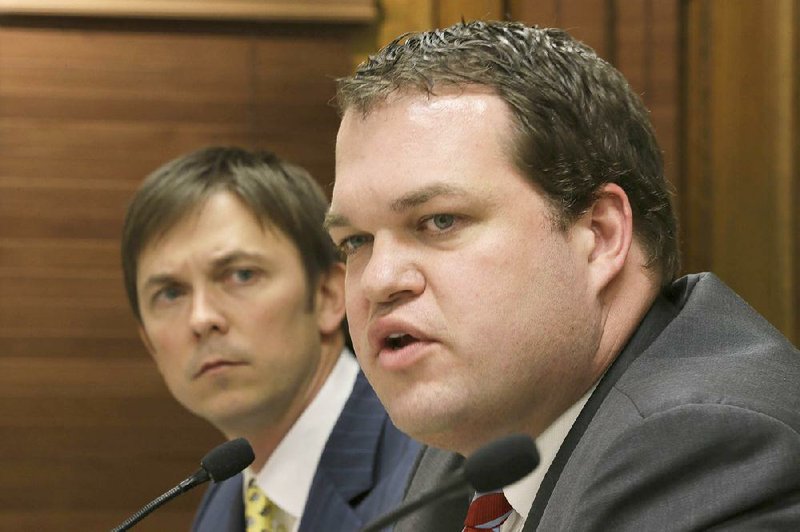 Lamoureux, a Russellville Republican, left the Senate in late 2014 to become chief of staff for Republican Gov. Asa Hutchinson in January.

That year, the nonprofit coalition -- known for working to get faith-based and other conservative voters out to the polls -- got a total of $140,000 in donations from six people or businesses, including nursing-home owner Michael Morton and two tobacco giants -- RAI Services Co. and Altria Client Services.

The national coalition's website says it favors such things as "legislation that strengthens families ... protects the dignity of life and marriage," and lowers taxes on small businesses and families.

Former state Sen. Gilbert Baker, a Conway Republican and former executive director of the Arkansas coalition, listed RAI as one of his clients at MEJ Consulting on a lobbyist registration form earlier this year.

Lamoureux declined to comment for this article, as did Baker.

Hutchinson spokesman J.R. Davis issued an emailed statement late Wednesday, saying, "Michael Lamoureux's association with the Faith and Freedom Coalition ended long before he came to work for this administration."

Lamoureux made $17,770 a year as the Senate president pro tempore, according to the state's transparency website.

Lamoureux did not list any income from the coalition on his statement of financial interest for 2013.

On that form, submitted annually, public officials are asked to list sources of income that total either more than $1,000 or more than $12,500.

The recipient of the coalition's funds was Lamoureux's law firm. The financial interest form does not list any attorney other than himself with the law firm. A call to that firm recently indicated that the phone number had been disconnected.

Founded in 2010 by Baker, the Arkansas coalition formally dissolved on Aug. 27, more than a year after Baker became entangled in a judicial bribery investigation. Baker gave up his position as the Arkansas Faith and Freedom Coalition's executive director in early January 2013 because he had accepted an administrative position at the University of Central Arkansas -- a job he has since left.

The coalition's tax documents for 2013 and 2014 list state Rep. Donnie Copeland, R-North Little Rock, who is a preacher, as the organization's executive director, but indicate that he was not paid. Instead, the coalition contracted with Lamoureux's law firm for "consulting services" in 2013, the records show.

The organization's federal tax return for 2013 said Lamoureux's law firm was paid $120,000 in 2013 for "consulting services" and that he was an independent contractor, rather than an employee of the organization.

• Morton of Fort Smith, $12,500. Morton owns numerous nursing homes and is a heavy campaign finance contributor who has worked for stricter lawsuit restrictions. Contributions that Morton made to several political action committees that later donated to former Judge Michael Maggio's appeals-court campaign have been under federal investigation. Baker helped raise money for Maggio and helped set up those PACs.

• DBH Management Consultants, a Morrilton-based lobbying firm founded by Bruce Hawkins, $30,000. The D. Bruce Hawkins 2 PAC was among the PACs that got money from Morton's businesses and later donated to Maggio's campaign. Hawkins did not return a phone message Wednesday.

The 2014 tax return does not mention Lamoureux. The Internal Revenue Service form requires that only the top-paid independent contractors, making more than $100,000 a year, be listed. The coalition did not list anyone in that section for 2014.

Copeland said Lamoureux got involved with the coalition "right about the time I was going off" the board.

"I remember thinking, 'Why is he making double the money'" that Baker made, Copeland said.

But Copeland said he didn't see anything amiss: "So, I just left it alone."

In a text message, Marvin Parks, a lobbyist who is listed as the Arkansas Faith and Freedom Coalition's registered agent and as a director on the dissolution form filed with the secretary of state's office, said: "With changing responsibilities of the board members, we found it more difficult to give the time needed to keep the coalition active and made the decision to dissolve."

Parks' comments did not address questions about Lamoureux's role with the coalition. Late Wednesday, Parks added, "I offered no comment on Lamoureux's role because I didn't join the organization until spring of 2014 and was not involved with those decisions."

Sid Rosenbaum, who is listed as a director on the coalition's dissolution form, said he didn't know "a lot" about what Lamoureux did for the organization.

Rosenbaum said he wasn't involved in the coalition until 2014. "I was told he did a lot of consulting. From what they told me, they kept him pretty busy."

Asked if Lamoureux did lobbying for the group, Rosenbaum said, "No, it was just going around and just talking and just getting out the message for conservatism ... and faith and freedom. That's all I know."

The opinion added: "If elected, any legislator must insure that she or he does not lobby on behalf of a present employer. Since the legislator would be receiving compensation from an outside source, he would have to avoid actions which could be construed as unduly soliciting or influencing other General Assembly members on issues which relate directly to his employer's interests."

The Associated Press reported Wednesday that the state Senate's rules of conduct in 2013 explicitly prohibited senators from discussing or voting on issues that "will specifically relate to a business which employs the senator or in which he or she receives compensation as an attorney or consultant."

If a senator has a financial conflict or financial interest in any legislation, he must file a letter in the Senate Journal, a daily record of Senate proceedings, the AP reported. It said no such notices turned up from Lamoureux in a search of the 2013 journal.

Coalition tax documents also show that Don Thomas, a former campaign aide to Baker and an officer on two of the PACs that gave funds to Maggio, is listed as the coalition's treasurer on its 2012, 2013 and 2014 tax forms. But Thomas said he didn't remember being on the coalition's board.

When asked about Lamoureux's pay, Thomas said, "I don't even know what you're talking about."

Bruce Campbell, now the governor's director of appointments, is listed as a coalition board member on all three tax forms.

Campbell said he recalls attending just one board meeting, perhaps in 2013, but he quit the board after that.

Little Rock attorney Chris Stewart is listed as secretary on the coalition's tax forms for 2012, 2013 and 2014. Stewart did not return a phone message seeking comment.

Stewart also is tied to contention surrounding the PACs that gave money to Maggio's campaign. He has said he created the PACs for Baker's LRM Consulting Inc.

Baker and Morton are defendants in a lawsuit that accuses them of conspiring to bribe Maggio to reduce a Faulkner County jury's May 2013 judgment in a negligence lawsuit against one of Morton's nursing homes.

Maggio, a former circuit judge, pleaded guilty to a federal bribery charge in January. He is set to be sentenced Feb. 26 in U.S. District Court in Little Rock.

Morton and Baker have denied wrongdoing and have not been charged with a crime.