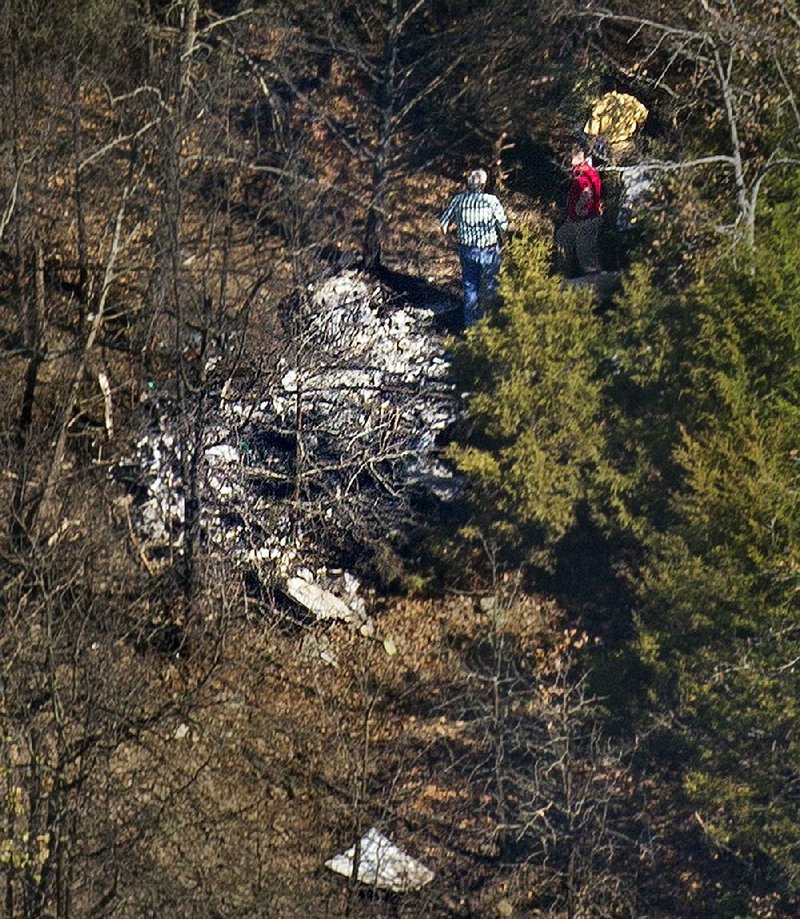 Investigators examine the wreckage of a Beechcraft Bonanza plane that crashed Thursday on Crow Mountain, east of the Russellville airport. More photos are available at arkansonline.com/galleries. ( Benjamin Krain)

RUSSELLVILLE -- A single-engine plane carrying a family headed to a relative's funeral in Tennessee crashed into Crow Mountain near Russellville early Thursday, killing all four people aboard, authorities said. 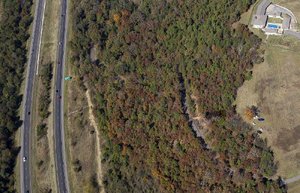 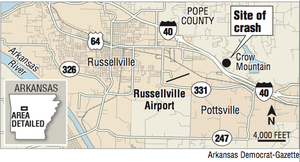 Photo by Arkansas Democrat-Gazette
A map showing the location of the plane crash in Pope County.

The plane, a Beechcraft Bonanza bound for Knoxville, had taken off from Russellville Regional Airport shortly after 7:45 a.m., airport manager Keith Frazier said. The weather was foggy but no rain was falling at the time, Frazier said.

Pope County Coroner Danny White had not released the victims' names by day's end. He said authorities thought they knew the names of the deceased but wanted to verify the identities with DNA testing because of fire damage to the bodies.

A woman answering the phone at the Knoxville home of Edward Burl "Ed" Harris, who died Monday and was to be buried Thursday afternoon, said three of those killed were Russellville relatives headed to the funeral.

White said later that he believed that information was correct and that the pilot was also a man from the Russellville area.

"He actually heard a boom," Wilson said, but he at first thought the sound was from traffic on Interstate 40, which runs near the mountain, as do U.S. 64 and Old Cove Road.

Jones said he did not recall the property owner's name.

Sheriff's deputies blocked off Van Horn Road, which leads to the crash site, to protect any evidence for investigators and to honor the wishes of the property owner, who did not want people driving by.

Wilson said the closest house was "probably 200 to 250 yards away" from the site.

Aerial photographs of the scene show that a post-crash fire destroyed the plane, leaving little more than slabs of metal, debris and a line of charred trees on the mountain's rugged terrain.

Carrion Crow Mountain, known as Crow Mountain to area residents, is between Russellville and Pottsville in Pope County. With an elevation of 1,082 feet, the mountain is visible from the airport about 2 miles west of the crash site.

Lynn Lunsford, spokesman for the Federal Aviation Administration, said the agency had dispatched investigators to the scene. He said the FAA would release the aircraft's tail number once it was confirmed, but the agency had not released it late Thursday.

The National Transportation Safety Board will be in charge of the investigation, Lunsford said.

In Washington, safety board spokesman Keith Holloway said the board would send someone to the site, likely today.

That investigator probably will spend a couple of days in Arkansas examining what's left of the aircraft, collecting "any other perishable" evidence and seeing that the wreckage is moved to a secure place nearby, Holloway said.

"We definitely will be looking at the weather," Holloway said of the inquiry. "There have been reports ... of fog in the area."

The board typically releases a preliminary report one week to 10 days after the crash, he said. That report will not determine the cause of the crash, but it will provide "some of the factual information we've gathered on the scene," he said.

It usually takes 12-18 months for the board to determine the cause of a plane crash, Holloway said.

Investigators generally look at any pre-crash communications with a control tower, if such exist, Holloway said. But Lunsford said the Russellville airport does not have a control tower.

"So they would not have been talking to air traffic controllers," Lunsford said of those aboard the plane. "I don't know if ... any broadcast was made on the local airport frequency."

According to FlightAware.com, a Beechcraft Bonanza plane has flown round-trip between Russellville and Knoxville at least six times since Sept. 1.

Information for this article was contributed by John Moritz of Arkansas Online.