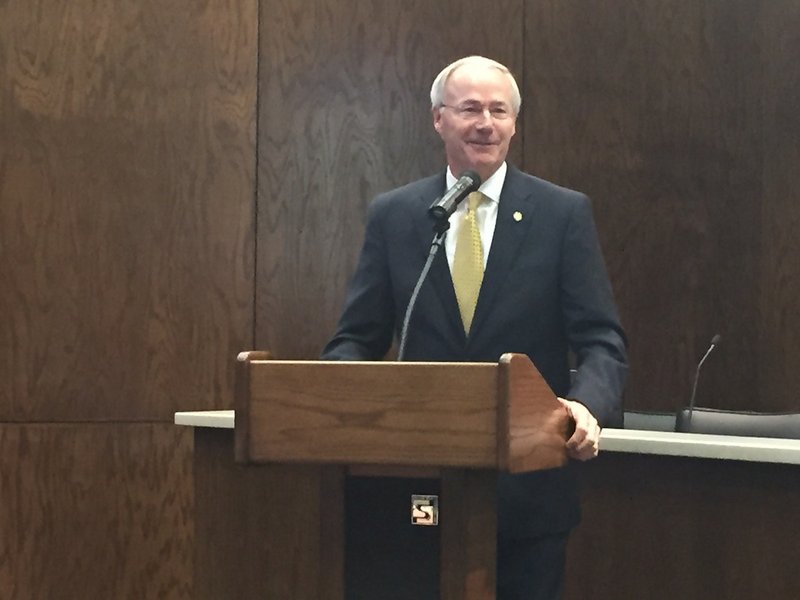 Gov. Asa Hutchinson outlines his higher education goals during a meeting of the Arkansas Department of Higher Education on Tuesday.

Gov. Asa Hutchinson said during an Arkansas Department of Higher Education meeting Tuesday that the state should re-evaluate its "outdated" method of funding higher education.

The funding changes, he said, should be formed through a base amount, with additional funding given through performance assessment, innovative initiatives and incentives.

"We in state government are just a piece of the puzzle, but it is an important one, and I like to think that I've got your flank," Hutchinson said.

State higher education funding currently relies on the 90/10 model — 90 percent based on student enrollment and 10 percent based on performance objectives — Department of Higher Education Director Brett Powell said after the meeting.

Speaking on challenges with Arkansas Academic Challenge Scholarship funding, Hutchinson said: "We have had high expectations on scholarship funding. It has been lowered. Hopefully it has flattened out, and actually, hopefully, that will increase down the road."

He added that he wants to raise completion and graduation rates by 10 percent in a time frame that is "ambitious and practical."

"Whereas 43 percent of Arkansans hold a post-high school degree, let's raise that to 53 percent," Hutchinson said. "Let's increase the enrollment of adults ages 25 to 54. This is important. They are an underserved population."

Workforce training, college readiness preparations, innovative learning tools and increased efforts to lessen the burdens of remediation were also part of the governor's proposal to the Department of Higher Education as it develops its updated master plan.

Tuesday's discussion was part of development on the Department of Higher Education's master plan, "Closing the Gap 2020," which is set to be in its final form by the end of October.