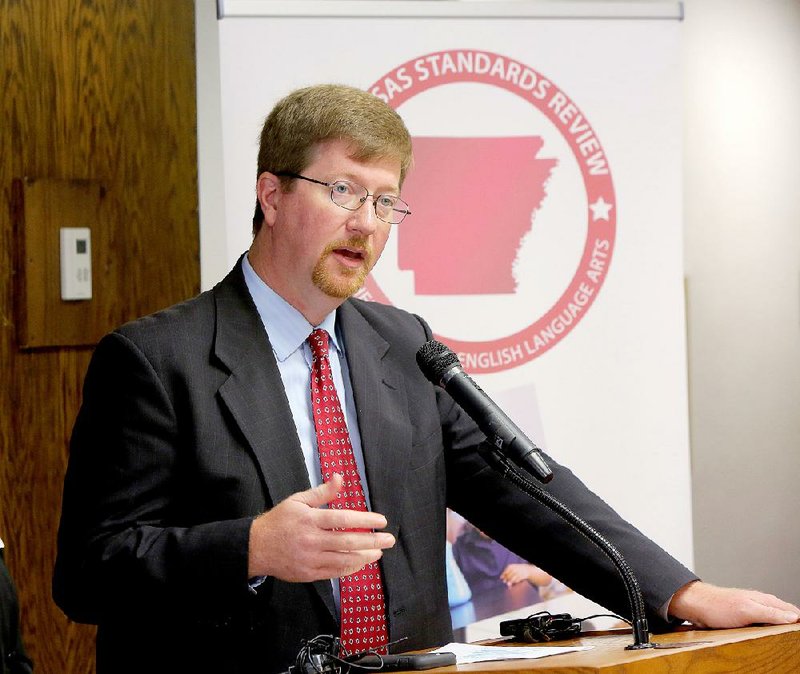 Forward Arkansas, a partnership of two philanthropic organizations and the state Board of Education, on Tuesday released its proposed plan for improving public education to the point that every student is prepared for success in college or in the workplace.

The 56-page plan -- which was guided by a steering committee of state education, business and government leaders, and was more than a year in the making -- will go to the Arkansas Education Board on Thursday for discussion and action.

Hugh McDonald, president and chief executive officer of Entergy Arkansas, is the chairman of the 28-member committee. Some of the other members are teacher organization leaders Brenda Robinson and Michele Linch; Ray Simon, former deputy secretary of the U.S. Department of Education; Scott Shirey, the head of the KIPP Delta Charter School system; and business leaders Bill Dillard III and John A. Riggs IV.

The plan includes "foundational recommendations," seen as critical to improving education, and "quick wins," that are faster to accomplish and would get results quickly. The recommendations fall into seven categories: pre-kindergarten, teaching and learning, teacher pipeline, effective leadership, support beyond the classroom, academically distressed schools, and systems and policies.

The myriad recommendations include developing marketing programs to communicate the value of prekindergarten; implementing healthy breakfasts as part of the school day; expanding quality after-school and summer programs for all students; and reducing and streamlining teachers' tasks to enable them to focus on instruction.

Other recommendations include offering adequate broadband access for all schools; attracting top talent to teach in high-need math and science subjects by offering districts the flexibility to pay teachers above the local salary schedules; supporting additional investments to pay school leaders more and align raises with evidence of effectiveness; and holding schools elections in November.

Jared Henderson, project manager of the Forward Arkansas initiative that includes the Winthrop Rockefeller Foundation and the Walton Family Foundation, said there are elements of the plan that would quickly see results and make a difference in the state and public education.

"But this plan is about how we make our state's entire education system one of the best in the country over the course of the next generation," Henderson said.

"It's a long-term, big plan, and as such, we didn't shy away from details. If the committee thought that an idea or a recommendation was part of the long-term direction that Arkansas needed to take, we put it in there and trusted that Arkansans would let us work alongside them over the next generation to figure out how to make it work."

He said the plan is "a stake in the ground" and "the best thinking that tells us what the way forward is."

He hopes people will read the report, which is titled "Working Together to Advance Education," form some opinions, talk with fellow parents and community members about it, and reach out to the plan's authors.

"Just know that in many ways this is the end of the beginning. Now the work of actually working side by side with the community can begin."

The steering committee will now give way to an Implementation Working Group that Henderson envisions being a permanent organization.

State Sen. Joyce Elliott, D-Little Rock, a retired teacher and a member of the Forward Arkansas steering committee, highlighted the makeup of the steering committee -- a diverse group of individuals who are often at political odds and not typically seen working cooperatively.

"But understand, there has been a genuine effort of study, and working together and listening to one another and appreciating what each member of the body thought. It is a report out there for people to weigh in on so that we can do what we can to move forward."

"We really need the public to weigh in on the proposal and give their input," Elliott said. "What is important about this conversation is that Arkansas as a whole needs to come together on what our education priorities are, and the strategies for getting there, with the end result being a very high quality education for our kids in decades to come."

She said the plan offers unity of purpose.

"We shouldn't leave ourselves in the position of every time there is another election, we are changing our priorities constantly. This is an opportunity for us to have some coherence about education because that is what is going to put us in a position to compete, not just within the borders but throughout the world."

The plan includes a large section on addressing schools classified by the state as being in academic distress or on the verge of academic distress because of chronic low achievement by students on state tests.

Currently, 22 schools, serving as many as 14,000 students, are state-classified as distressed because fewer than half of their students scored at proficient levels on state math and literacy exams over a three-year period.

Those schools include six of the Little Rock School District's 48 campuses and two in the Pulaski County Special district. Schools in districts such as Pine Bluff and Blytheville are also among those 22.

Because of the six distressed schools, the state took over operation of the Little Rock School District earlier this year and dismissed the district's locally elected school board.

A bill proposed in the Arkansas Legislature earlier this year would have given state officials the authority to assign academically distressed schools to an independently operated charter school management firm on a long-term basis. The bill was ultimately pulled down, and there were concerns that Forward Arkansas might incorporate that strategy into its recommendations.

A call for an external provider or management firm for troubled schools was not evident in the strategic plan released Tuesday.

"When we engaged people around the state -- not just to hear their thoughts but also to see what was going on and what was working well, and even when we engaged external experts as we did in this process -- we didn't see anything that didn't lead us to believe we didn't have the tools in Arkansas to make a difference in our schools," Henderson said.

"Quite the contrary. There is tons of evidence everywhere that if struggling schools are going to be strengthened, the local leaders and local communities have to play a major role. Even in instances where the state is involved, there has to be collaboration at all levels."

Another recommendation calls for the state to consider removing leadership, or assuming control of a school or district if its leadership demonstrates an inability to implement improvement strategies.

The proposed plan also suggests that progress in academically distressed schools and schools on the verge of academic distress should be measured using a "balanced set of metrics, not just proficiency levels on test scores."

The evaluation of a school should take into account its progress in carrying out improvement plans; student achievement growth; indicators of achieving, such as attendance and retention; and the analysis of factors that may be contributing to or inhibiting progress -- such the availability of academic supports or external risk factors, including safety, housing, healthy food options, public transportation and green spaces.

The recommendations give a lot of responsibility to the Education Department and call for the department to be held responsible for results.

"The single unit should be led by a direct report to the commissioner," it adds. "New teams with specialized capabilities ... should be created inside the Arkansas Department of Education unit."

One team would be the community engagement team, the other the ongoing evaluation team. The first would help the schools build community support. The other would create, pilot and implement the proposed evaluation recommendations.

The Education Department must be held accountable for the success of academically troubled schools by the state Board of Education, and should continually evaluate the effectiveness of the unit and conduct a formal review of it after five years to see if it should continue, the plan says.

The plan's section on systems and policies calls for streamlining the regulatory burden for educators at all levels, including the Education Department.

"Encourage a shift from a compliance mindset to a performance-driven mindset," the plan proposes, and "enable educators to focus on their most important roles."

The Forward Arkansas plan also addresses Education Department recruiting -- calling for the agency to have the flexibility to hire necessary staffing and be exempted from mandated salary ranges, job posting requirements and hiring timelines. It said compensation in the Arkansas Department of Education staff salary schedule should increase to be at least as competitive as the salary schedules for school districts.

The plan suggests that the state consider changes for underperforming educational cooperatives across the state, and deals with the metrics used to determine a school or district's level of efficiency.

The report states that schools "are not sufficiently resourced to perform at the aspire level of educational excellence," and investments should be made to achieve that end.

English-language-learning programs, for example, are identified as receiving insufficient funding compared with the need, as is current funding for pre-kindergarten education.

The plan says the state must have measurable checkpoints to ensure progress.

"Unfortunately, measuring progress in education is difficult," the plan says. "Currently there is not a set of metrics available that we feel measures progress holistically. Until we can develop better metrics, we must continue to rely on existing assessments, rankings and test scores. But we will use them in a new way."

The measures the report proposes to use to determine the state's progress toward becoming one of the nation's leading education states and closing the achievement gap between student groups within a generation include: Average Qualls Early Learning Inventory for the state's youngest school pupils; the National Assessment of Educational Progress test given to fourth- and eighth-graders; the state's ranking on the ACT college entrance exam among states in which more than 50 percent of students take the test; and the two- and four-year college graduation rates.

The report also urges that education laws be kept as simple as possible.

The full plan can be viewed at the organization's website: forwardarkansas.org.