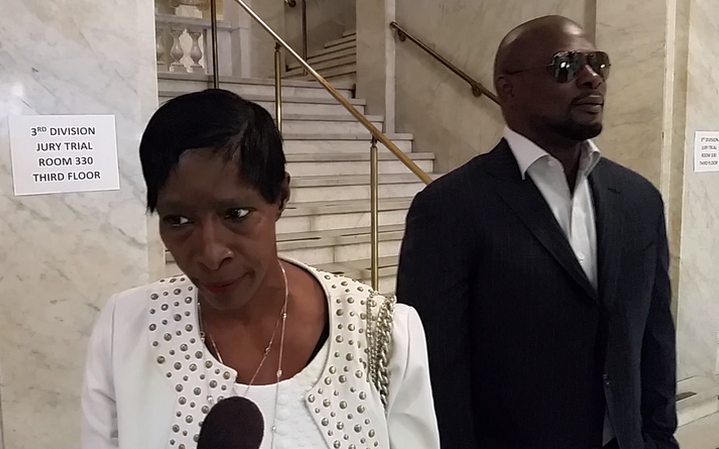 Jermain Taylor's mother, Carlois, speaks to reporters before her son was to appear in court in May 2015. ( Gavin Lesnick)

Boxer Jermain Taylor will be allowed out of jail to say his final goodbyes to his mother, who died earlier this month, but he can't attend her funeral.

Taylor has been in the Pulaski County jail since May, when Pulaski County Circuit Judge Leon Johnson revoked his bond after Taylor was accused of assaulting a man at a treatment center.

Taylor had been sent to the lockdown substance-abuse program after arrests in two other cases.

Hubert Alexander, an attorney who represents Taylor, said Thursday that he had been in discussions with the prosecutor and Johnson regarding the funeral, which is set for 11 a.m. Saturday. Taylor's mother, 54-year-old Carlois Jennie Brown Lewis, died Sept. 9 after her lung cancer spread.

Alexander said the judge approved allowing Taylor to go the funeral home before the service to spend time with his mother and a preacher. But he will not be allowed to go to the service or to the cemetery where she will be buried.

"We've done everything that we could do to let him say his goodbyes to his mother," Alexander said. "He understands the situation."

Alexander said deputies from outside Pulaski County will have to be hired by the defense to escort Taylor from the jail to the funeral home. He declined to say how much that was expected to cost.

"As long as there is appropriate security, we didn't have an objection if that's what the judge was going to allow to happen," he said.

He said prosecutors were never presented with a plan in which Taylor would attend the funeral.

Alexander noted that Taylor being at the funeral likely would have caused a commotion.

"We probably don't really need that," he said. "[Taylor] doesn't need to be put in that situation."

Asked if his client was upset about not being able to attend the full service, Alexander said Taylor is "disappointed being in jail, period."

"I don't know how you'd separate one disappointment from another," he said.

In addition to the case stemming from the purported assault at the treatment center, Taylor is accused of shooting his cousin outside the boxer's Pulaski County home last year and opening fire and threatening a family after a Little Rock parade in January for the Martin Luther King Jr. holiday.

Taylor has been cleared to stand trial in the first two cases, but a mental evaluation is still pending in the third.

Taylor is due back in court Monday for a hearing in which the results were expected to be presented, though Alexander said Thursday that the report still was not complete.

The judge said previously that he would consider setting bail for Taylor after the report is done.