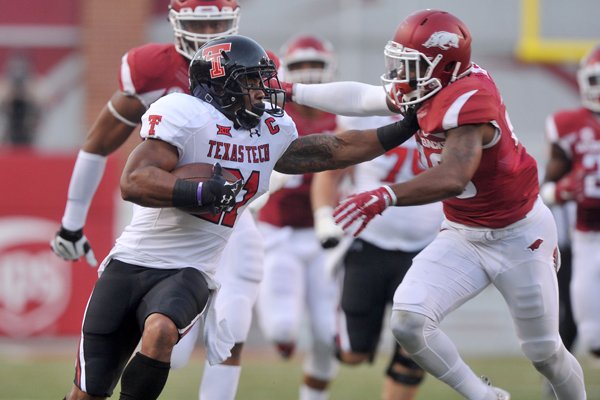 Texas Tech running back DeAndre Washington is tackled by Arkansas defender Rohan Gaines after a big run during the first quarter Saturday, Sept. 19, 2015, at Razorback Stadium in Fayetteville.

FAYETTEVILLE -- Two weeks ago the Arkansas Razorbacks were ranked No. 18 after opening the season with a 48-13 victory over Texas El-Paso.

This isn't the start anyone expected with Arkansas returning 15 starters from a team that won three of its last four games last season -- including shutouts of Ole Miss and LSU and a 31-7 pounding of Texas in the Texas Bowl.

Instead of building on last season's 7-6 record, the Razorbacks appear to be closer to their 2013 team that went 3-9.

"We hate losing," said junior cornerback D.J. Dean, who had an interception Saturday in the loss to Texas Tech. "We do not want to slip back to where we were two years ago, or even a year ago.

"We want to move on from that, and that's what we're going to do next week."

If Arkansas can upset the Aggies, it could revive the Razorbacks.

"It's a new season," Arkansas quarterback Brandon Allen said. "That's going to be our mind-set."

Allen, a fifth-year senior, said he remains confident the Razobacks can turn their season around.

"I think we've just got a lot of guys that have bought in," he said. "The guys still have the right attitude about what we want to get done.

"We have every SEC game ahead of us. We still have a lot to play for and we're going to do what we can to win each and every one of those games."

Arkansas Coach Bret Bielema said the Razorbacks showed no signs of giving up against Texas Tech.

Junior defensive end Jeremiah Ledbetter said the Razorbacks should have extra motivation playing Texas A&M to make sure they don't have a third consecutive loss.

"The fire within us coming off these losses is building up," Ledbetter said. "I think we're going to release it."

Bielema said an improved passing game through the first three games should be a boost against SEC teams.

"The good news is we can throw the football and run the football," he said. "We're 1-2 right now, but I think going into SEC play we're probably more prepared than we have been to be a little more balanced."

The Razorbacks gained 424 yards against Texas Tech, including 228 rushing and 196 passing.

"We did some good things, we've got some players moving in the right direction," Bielema said. "Unfortunately, we lost to a good football team.

"We're going to get better this week."

"If we do what we're supposed to do to the best of our ability, we'll have great success," Collins said. "This is the just the beginning.

"We've still got a lot of football left. The losses we've just had don't determine our future."

"There's a mountain to climb, and we're not at the top," Bielema said.

"You should play with an edge after losing two games like this that we shouldn't have lost," Dean said. "We've got to come back and play a lot better."

Arkansas' next three games are away from home, though the Razorbacks technically will be the home team against Texas A&M. After playing the Aggies, Arkansas plays at Tennessee and at No. 12 Alabama.

"It's just more adversity," Allen said. "We've got to play well, got to play tough. We're going to do what we can to win."