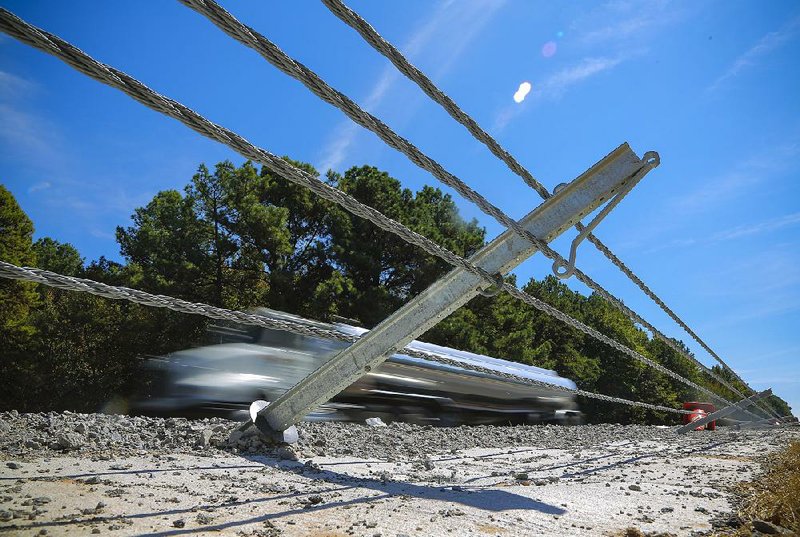 Vehicles pass a section of broken cable-median barrier Tuesday afternoon on Interstate 530 north of Dixon Road. State highway officials are investigating why the section of barrier, intended to prevent lane crossover collisions, did not work as designed in a Sept. 13 accident. ( Stephen B. Thornton)

The Arkansas Highway and Transportation Department is investigating why a cable-median barrier didn't work as designed and prevent a vehicle from entering an opposing lane of interstate traffic. 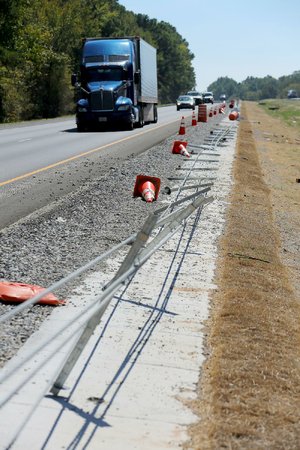 Photo by Stephen B. Thornton
The failure of this section of cable-median barrier on Interstate 530 just north of Dixon Road during a Sept. 13 accident was “an unusual result,” said Danny Straessle, spokesman for the Arkansas Highway and Transportation Department.

The barrier, which was on Interstate 530 just north of Dixon Road, did "corral" the vehicle in the Sept. 13 crash, as it is supposed to do, but the cable stretched farther than it should have, according to Danny Straessle, the department spokesman.

The vehicle came to rest in an oncoming-traffic lane but didn't hit any oncoming vehicles, he said.

Straessle said it is the first instance that department officials are aware of in which the cable-median barrier didn't work as designed.

"This is an unusual result," he said. The barriers "were installed according to the manufacturer's specifications," he said. "We are in the process of investigating what happened."

The department has pushed to install the cable barriers on interstates and U.S. highways, where warranted, calling them a cost-effective way of preventing vehicles from crossing medians into opposing traffic lanes and causing head-on, often fatal, collisions.

More than 60 percent of all traffic fatalities involve a vehicle leaving the roadway, according to records. Of those, about a quarter involve crossing a median or centerline.

Cable-median barriers are high-tension, fencelike structures with steel wires attached to lightweight posts. According to the Federal Highway Administration, they are designed to "deflect laterally to absorb energy and reduce the impact on vehicle occupants."

The state Highway Department's studies show that the barriers are effective. One study of an 8.5-mile section of Interstate 40 in Prairie and Monroe counties showed that the cable-median barriers there prevented fatal crashes.

A total of 699 miles of the barriers have been installed in Arkansas, according to Highway Department data.

The Sept. 13 crash occurred early in the morning and involved two vehicles traveling south on I-530 just north of Dixon Road, according to Straessle.

That crash is unrelated to one on I-530 south of Dixon Road on the same morning, in which three people were killed in a wrong-way, head-on collision, he said. The fatal crash temporarily halted traffic in the northbound lanes, Straessle said.

The cable-median barrier on the stretch of roadway north of Dixon Road had been recently installed, Straessle said. The installation was considered complete, he said.

The contractor who installed the barrier had "tensioned," or tightened, the cables on Aug. 4, Straessle said. As part of the protocol to finish the project, the contractor "re-tensioned" the cables 28 days later, on Sept. 1, he said.

Barriers are typically placed about 10 feet from the edge of a roadway and are designed to stretch 8 feet, he said. The cables in this instance stretched beyond those designed limits. The second vehicle in the crash ran off the right shoulder of the interstate.

The median barrier worked to a certain extent in catching the vehicle that ran off the roadway's left side. "The cables did their job in corralling the vehicle, but the cables stretched further than anticipated and allowed the vehicle to come to rest in the opposing lane of traffic," he said.

The Highway Department is still waiting to receive an accident report from the Arkansas State Police, which investigated the crash, Straessle said.

"All accidents are different," he said. "We want to look at the angle the vehicle struck the cables. Most do strike it at a 90-degree angle."

Meanwhile, the contractor is contacting the manufacturer to review the specifications, Straessle said.

The accident report also is likely to reveal who was responsible for the crash. Straessle said the department typically bills the insurer of the party responsible for damage to state property. "That does not come out of the taxpayers' pocket," he said.