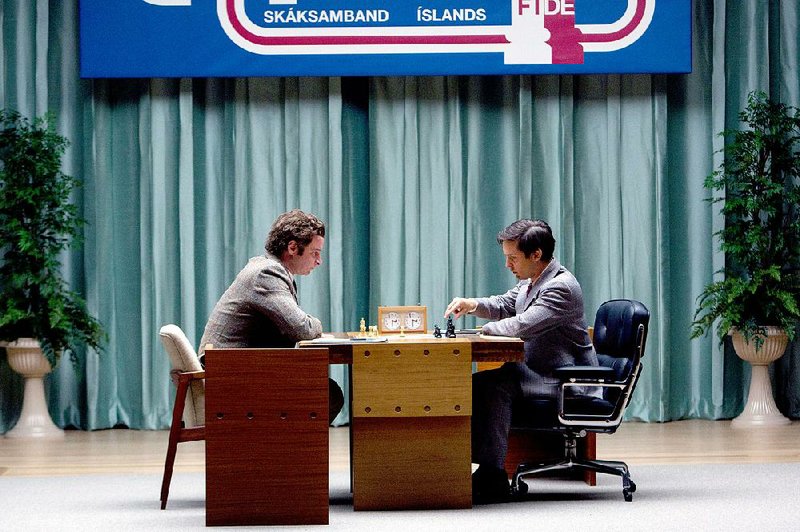 The turbulent life of Bobby Fischer -- arguably the greatest, and definitely the most famous, chess player of all time -- has already been the subject of an insightful HBO documentary, while serving as a backdrop for Steven Zaillan's laudable 1993 drama. But it's never been re-created on screen, which is what writer Steven Knight and director Edward Zwick have attempted to do in Pawn Sacrifice, a classically helmed bio-pic that brings nothing new to the genre, but benefits from handsome craftmanship and solid performances by Tobey Maguire as the Brooklyn boy wonder, and Liev Schreiber as his longtime Russian nemesis, Boris Spassky.

You don't have to understand the rules of chess (and this reviewer doesn't) to admire the genius of Fischer, who began playing at age 6 and quickly rose to the top, his career culminating in the breathtaking defeat of Spassky at the 1972 World Chess Championship, after which he disappeared from the public eye and descended further and further into madness.

Flash-forwarding to the famous Reykjavik, Iceland, match that had the whole world on the edge of its seat, the script by British screenwriter Knight (Eastern Promises, Locke) then tracks back to Brooklyn in the early 1950s, where young Bobby (Aiden Lovekamp) lives with his mom (Lily Rabe), a left-wing activist associated with the Communist party. Growing up in such a household during the Red Scare years is, as the film implies, the source of Bobby's burgeoning paranoia, which takes on troubling proportions when he prematurely becomes the "Da Vinci" or "Mozart" of chess -- as he's referred to by his hardworking manager (Michael Stuhlbarg) and devout trainer (Peter Sarsgaard).

Taking us through the usual bio-pic ups and downs as Fischer makes his way from New York to the big leagues, the film doesn't break any new ground in terms of style or structure, with Zwick (Blood Diamond, The Last Samurai) delivering a fairly standardized package, albeit one that's polished looking and compellingly performed, especially when the U.S. upstart plays the Russian champ for the first time in California.

It's there that Maguire, who impressively channels the chessman's erratic gestures and penetrating gaze (though he doesn't quite nail the Prospect Heights accent), comes into his own, revealing Fischer's growing obsession with a man who represents everything he despises: Communism, coolness and a certain comfort in the game. Wearing sunglasses and speaking Russian like a pro, Schreiber is terrific as the reigning Soviet heavyweight, containing all emotion while showing that he's man enough to respect his competitor, not to mention admire the American way of life.

But Bobby remains as paranoid as ever, and his obsessions become increasingly harmful to himself and those around him, nearly sabotaging the grand, nail-biting finale in '72, which was memorable as much for Fischer's unbearable conduct as it was for his brilliance. And while he's clearly his own worst enemy, Pawn Sacrifice also shows that Fischer was used as a mascot for the fight against the commies, pushed by his government (he gets a pep talk from Henry Kissinger at one point) to win, even if he was ultimately fighting the inner demons that haunted him from the start.

Cinematography by Bradford Young (Ain't Them Bodies Saints) uses neutral tones to convey the solitary world in which Bobby lived, culminating in the Iceland-set standoff where at one point he trashes a house filled with some highly attractive Scandinavian furniture (courtesy of production designer Isabelle Guay). A workable score by James Newton Howard is accompanied by tunes from popular acts of the time -- Jefferson Airplane, Creedence Clearwater Revival, The Doobie Brothers -- which, like the movie itself, are go-to choices that get the job done.