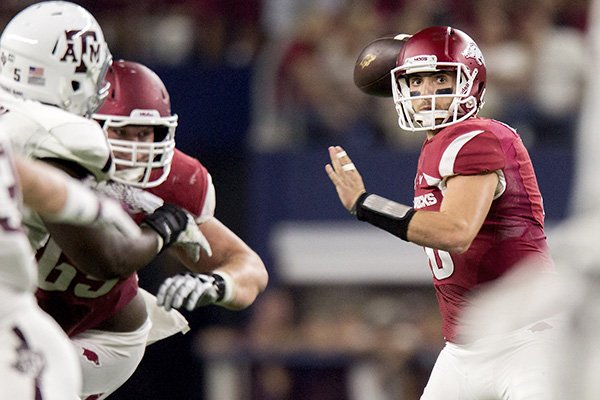 FAYETTEVILLE -- If playing keep-away with the football were the most essential factor in determining the outcome of games, the Arkansas Razorbacks would be among the best teams in college football.

Arkansas enters this season's first true road game Saturday at Tennessee ranked No. 3 in the FBS in time of possession with an average of 35 minutes, 51 seconds per game, meaning its offense has been on the field nearly 12 minutes per game more than its opponents (24:09). Only North Carolina State and Rice have been better at keeping their offenses on the field.

Time of possession is a key element in the offense's success under Coach Bret Bielema and offensive coordinator Dan Enos, but dominating in that department hasn't equated to piling up points or victories for the 1-3 Razorbacks.

The Razorbacks are tied with Texas A&M in total offense, but the Aggies, who average 41.5 points per game, are one of six SEC teams that are even or behind Arkansas in total offense but are scoring more than the Hogs. The others include Tennessee (41.2 points per game), Alabama (35.8), Florida (33.5), LSU (33.3) and Mississippi State (33.0).

"We're moving the ball, we're doing a lot of things well, but one of our areas that we really need to improve on is scoring efficiency in the red zone," quarterback Brandon Allen said. "We had one game we were awful and couldn't score in the red zone. We've improved since then and done a lot of things really well."

The reasons the Razorbacks haven't scored on pace with their statistically improved offense -- they were No. 60 in total offense (406 yards per game) and No. 42 in scoring (31.9) last year -- are numerous.

In their 16-12 loss to Toledo, the Razorbacks scored three points in five trips inside the Rockets' 20.

Penalties have been devastating, with a punt return touchdown and a pass reception touchdown being called back by flags against Toledo and Texas Tech, respectively. Another run play that reached the 1 came back because of a holding penalty on a possession that wound up pointless against Toledo.

"We've got to stop killing ourselves," receivers coach Michael Smith said. "The penalties are killing us. The turnovers are killing us. When you play in this conference and play the caliber of ball we have to play, to have those self-inflicted wounds against good teams you put yourself behind the eight ball and you can't afford to do that."

Arkansas is tied for No. 119 in the country with 66.7 percent scoring in the red zone.

"Obviously that's what you're looking at is we've stalled down there," tight ends coach Barry Lunney Jr. said. "We haven't capitalized on our opportunities.

"It's about the fine details in the red zone, and if we can turn field goals into touchdowns and not go backward, I think you'll see the points match up with the yards."

All four of Arkansas' first-half possessions reached Texas A&M territory last week, but the Razorbacks scored only one touchdown in the half. On the last three of those drives, the offense produced 101, 65 and 35 yards, but 50 yards in penalties kept pushing the Razorbacks into unfavorable down-and-distance situations. They overcame a 5-yard false start and a 10-yard holding penalty on Frank Ragnow on the second series to score on Allen's 17-yard pass to Drew Morgan.

"It's hard to win, it's hard to score points, when you aren't clean," Allen said.

The Razorbacks were more effective in the red zone in last week's 28-21 overtime loss to Texas A&M. They scored touchdowns on all three of their trips inside the Aggies' 20 in regulation, but lost the ball on downs in overtime at the Texas A&M 19 with the game riding on it.

Enos, whose system has produced 285 passing yards and 186 rushing yards per game, said the Razorbacks accomplished many of their offensive goals last week with a significant exception -- closing out the game.

"One of the plans was we wanted to possess the ball, keep it out of their hands," Enos said of the Hogs, who rushed for 232 yards and recorded 25 first downs. "Those were all very positive."

Arkansas came up short in one key area.

"The last one was to finish and that's where I really think we fell short offensively," Enos said. "We didn't finish the game the way we wanted to. That's going to be a big emphasis moving forward."