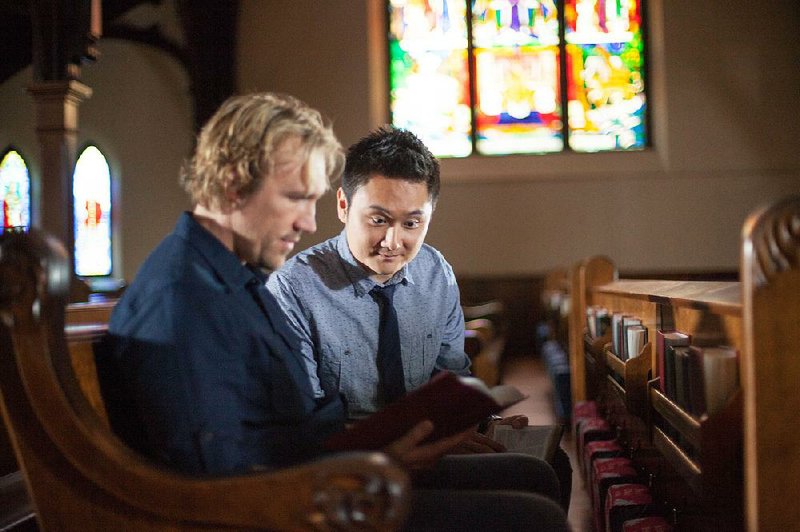 I really don't want to do this. 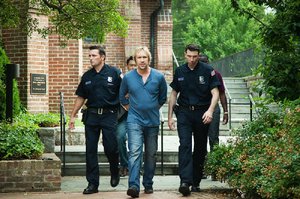 Rev. Dave (David A.R. White) would rather go to jail than comply with a subpoena ordering him to turn over copies of his sermons to the prosecuting attorney in God’s Not Dead 2.

Seriously, I looked for a wire review I could run of God's Not Dead 2, figuring I could plead out on a conflict of interest. After all, this is a movie that was filmed in and around Little Rock. It provided many people in the local film community with experience and a paycheck. I am fond of many of these folks.

Rating: PG, for some thematic elements

And the filmmakers, some of whom I've briefly met, seem like very nice people. And I think they have a perfect right to make whatever sort of movie they want to make for whatever audience they imagine is out there. They also allowed me to see the film in advance, for purposes of review. This was very gracious of them.

Often the makers of movies like God's Not Dead 2 prefer secular film critics like me not see their films in advance, because we tend to write about things that the filmmakers might see as irrelevant. Most people don't watch 300 or more movies a year, so why should a movie made for people who probably don't see more than a handful be subjected to that kind of scrutiny? Sometimes the makers of these films, which are often genre-binned as "faith-based," will seek out a writer they know is sympatico with their witnessing mission to write about their movie. As far as I know, the God's Not Dead 2 folks didn't try that; they didn't try to make an end run around traditional cultural gatekeepers. I don't know that any other film critics were there when they showed the movie on six screens in mostly filled theaters at Riverdale 10 a few weeks ago, but I know there could have been.

But I didn't find any reviews on our wire. Besides that, we try to run original reviews whenever we have the chance. I'd seen the movie. And I didn't feel it necessary to recuse myself from writing about Little Rock native Jeff Nichols' Midnight Special elsewhere in this section. I have to write about God's Not Dead 2, even though I know that some of you will not much like what I have to say.

But first, let me say there are some very good things about God's Not Dead 2. From the perspective of an Arkansan, a resident of Little Rock, let me say that they made my state, my city, look gorgeous. If nothing else, God's Not Dead 2 will make a wonderful demonstration reel for the Arkansas Film Commission. And while there are a couple of shaky performances, on the whole the level of acting is quite high.

And it isn't hard to watch, although I suspect that a lot of the pleasure comes from seeing people and places I know on screen. This movie will play differently in Des Moines, Iowa, or Austin, Texas, than it will here -- an easy comparison is to the Brian Bosworth movie Stone Cold, which was also filmed in Little Rock. (I'm told that in the late '80s and early '90s there were noisy VCR-viewing parties of the film held in the Capitol View neighborhood.)

Some of you may be familiar with 2014's God's Not Dead, this film's predecessor, that dealt with an idealistic Christian college freshman in conflict with a dictatorial philosophy professor played by Kevin Sorbo.

In this loose sequel (tied to the first film primarily by the presence of David A.R. White, a veteran actor who is also a founding partner in the Pure Flix faith-based studio and one of the producers here), high school teacher Grace Wesley (Melissa Joan Hart) is faced with the loss of her job (and "everything she owns") after she responds to a student's leading question about the similarities of the teachings of Jesus Christ, Mahatma Gandhi and the Rev. Martin Luther King Jr.

This is a violation of school policy, and when Grace refuses to apologize, her superiors are happy to throw her to the wolves. It seems that the American Civil Liberties Union is looking for a test case. Apparently they want to establish some sort of legal precedent declaring Jesus a fictional figure.

I understand that some Christians believe they are in fact persecuted in the United States. And there may very well be cases where institutions have over-reacted to innocuous remarks. But what the film does is build a straw-man case against the sort of Christian-haters I simply don't believe exist in significant numbers in this country. I've known plenty of card-carrying ACLU members who also have a rich religious relationship.

But God's Not Dead 2 isn't so much -- to borrow a prefix from anthropologist Clifford Geertz -- an anti-anti-Christian film as an anti-nuance film. It relies on an unrealistic case not because realistic cases don't exist (I imagine they do) but because it's much easier to win when you get to make up the other side's arguments. While there are some very interesting moments in God's Not Dead 2 -- like the testimonies of former homicide detective J. Warner Wallace, and pastor turned author Rice Broocks, both of whom appear as themselves in the movie -- it's a rigged debate.

For starters, there's no way the ACLU would let the Prince of Darkness himself (Ray Wise) argue their case. There's nothing subtle here. The Christian students are well-scrubbed, lithe and diverse. The atheist protesters who confront them are ugly, sloppy and fat.

I'm not saying don't go see it. You probably should. You can make up your own mind about the quality of the script. I felt like it cheated. For a moment, I want to turn it over to my friend Tim Jackson, who has produced, written and directed films. He's also a Baptist preacher.

And in 2007 he wrote a piece for Relevant, a Christian magazine that focuses on "God, life, and progressive culture." He was writing about another faith-based film, one that feels primitive and clumsy compared to God's Not Dead 2, but seemed to have the same sort of mission.

That movie, Jackson wrote, "doesn't tell a story so much as it builds a case. The people who made it hope that the end result of their efforts will be ... well, more Christians ... [It] is an infomercial for a brand of Christianity. From the moment it starts to its never-in-doubt conclusion, it does what all advertising does: sells."

You can say that's what every movie does, but some movies work with more subtlety, trusting audience members to come to their own conclusions. God's Not Dead 2 isn't a debate, it's a pep rally. Nobody rooting for the other team need pay attention.