Thornton remembered as 'pillar of political and educational life in Arkansas' 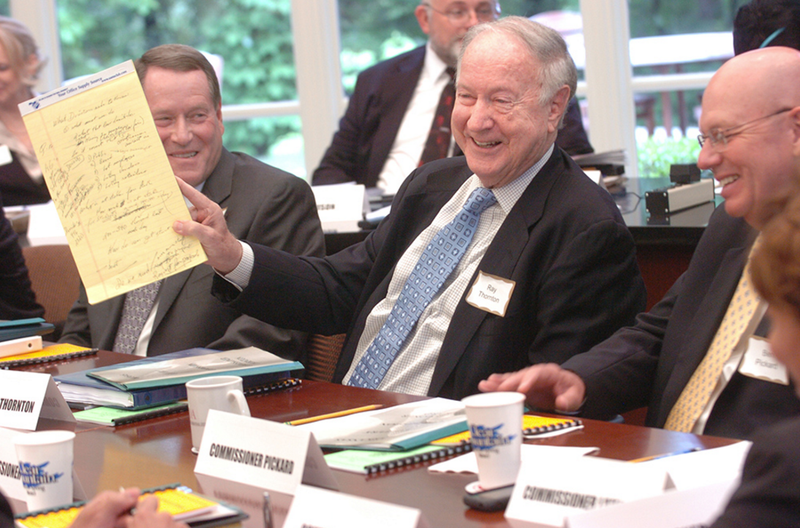 FILE — Ray Thornton holds up a pad of notes he had taken after he was selected the interim chairman during the organizational meeting of the Arkansas Lottery Commission in this May 5, 2009 file photo.

Ray Thornton, whose career included terms in the U.S. Congress and presidencies at Arkansas State and the University of Arkansas, died in a Little Rock hospice Wednesday, the county coroner said.

Thornton, 87, had been placed in Hospice Home Care under a diagnosis of lung cancer, Pulaski County Coroner Gerone Hobbs said. He was pronounced dead at 1:45 a.m. Wednesday.

First elected to Congress in 1973, the Conway-native served three terms before losing a Senate race to fellow Democrat David Pryor in 1978, according to his congressional biography.

[GALLERY: Photos of Ray Thornton over the years]

During his first stint in Congress, Thornton served on the House Judiciary Committee, helping draft articles of impeachment against President Richard Nixon.

After more than a decade in education leading UA and ASU, Thornton returned to the House in 1991, serving another three terms before retiring and being elected to the Arkansas Supreme Court.

Shortly after his death was reported early Wednesday, condolences began arriving from Arkansas and Washington, D.C.

In a statement, Sen. Tom Cotton called Thornton a "pillar of political and educational life in Arkansas," who "leaves a lasting legacy of selfless service and principled leadership."

The UA System said on Twitter that it was joining "the family and friends of Ray Thornton in mourning his loss and celebrating his career."

“Congressman Ray Thornton led a distinguished career that benefited Arkansas from public service as an elected official to leading our state’s top universities," said a statement from Sen. John Boozman. "His dedication to the people of Arkansas leaves a lasting impact."

Conner Eldridge, former U.S. Attorney for the Western District of Arkansas and the Democratic nominee challenging Boozman, said Thornton was one of the state's "great leaders."

"I remember hearing my grandfather, John Tull from Lonoke, speak highly of him and the work they did together," Eldridge said in a statement. "Congressman Thornton left a lasting legacy on the people and the quality of this state. As a congressman and through his time spent at multiple universities, he inspired us all with his dedication to public service."

"His legacy is inspirational to the next generation of leaders," Griffin said in a written statement.