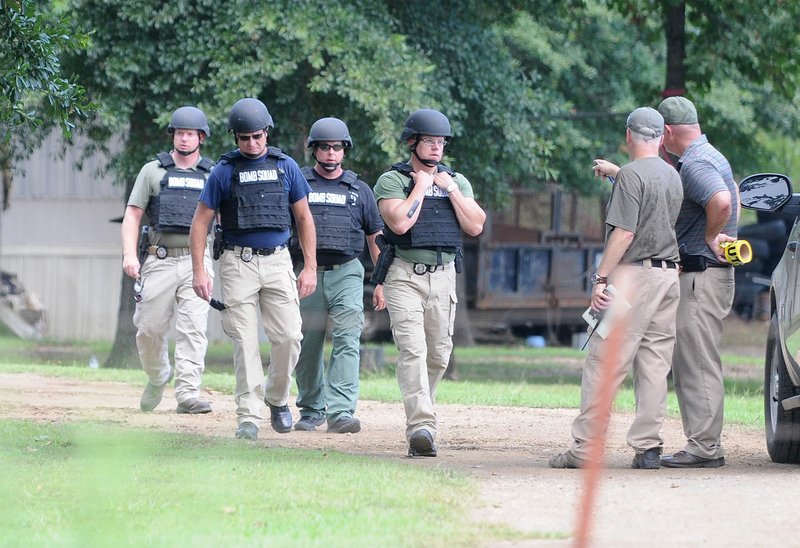 Police investigate the scene Wednesday where a Sebastian County deputy was killed and Hackett’s chief of police injured during a domestic call near Greenwood. Police say Billy Monroe Jones shot at the officers and then barricaded himself inside a home.

A lawyer who once represented a man accused of shooting a Sebastian County sheriff's deputy said his client disliked law enforcement but was not a sociopath. 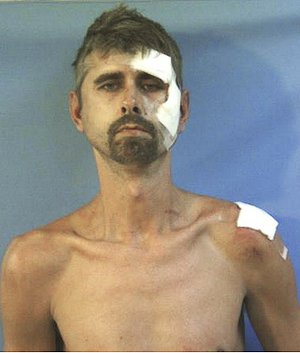 Fort Smith attorney Jim Robb described Billy Monroe Jones, 34, as an argumentative know-it-all but not violent and a man who worked hard and "smoked a little weed."

"I feel this will haunt Billy Jones. He is not without conscience. He is not a sociopath," Robb said Wednesday.

Jones was being held without bail in the Crawford County jail Thursday on a Sebastian County warrant in Wednesday's shooting of Deputy Bill Cooper and the wounding of Hackett Police Chief Darrell Spells.

Cooper, 65, died in a Fort Smith hospital about 1:15 p.m. Wednesday from a gunshot wound in his neck. Sheriff Bill Hollenbeck said Jones opened fire on deputies and officers with a rifle as they went to his rural Sebastian County home on a disturbance call about 7 a.m. Wednesday.

Spells, who has headed Hackett's six-person department for three years, was grazed in the temple by one of the bullets. He was treated for his injury and released from the hospital.

Jones also shot a Greenwood police dog Wednesday during a 4½-hour standoff with authorities. The wounded dog escaped from its handler and ran away. As of Thursday afternoon, searchers had not found the dog, according to the Greenwood Police Department.

The sheriff's office announced funeral arrangements for Cooper on Thursday. The service will be at 10 a.m. Tuesday at the Community Bible Church at 9201 Dallas St. in Fort Smith. Burial will follow at Oak Cemetery at 1401 South Greenwood Ave.

Jones was not officially charged Thursday in Cooper's death or Spells' wounding. Sebastian County Chief Deputy Prosecuting Attorney Linda Ward declined to comment on what charges Jones could face and when.

The results of the investigation will be turned over to the prosecutor's office for the filing of charges, he said.

Robb represented Jones in a 2007 case where he and his father, Clarence Eugene Jones, were charged with manufacture of marijuana. The charge against Clarence Jones was dismissed in August 2008, according to court records.

Court records showed Billy Jones pleaded guilty to the charge. In return, imposition of his sentence was suspended for five years, he was fined $750 and was ordered to pay $150 in court costs and a $250 DNA sample fee.

The plea form stated that on completion of the conditions of his suspended sentence, Jones would be eligible to have the records sealed. The case was sealed in February 2013, according to court records.

A Greenwood police report stated that on Feb. 16, Jones was pulled over for speeding. When the officer asked if he had any weapons, Jones pulled a loaded .40-caliber Glock 22 handgun from under his coveralls, it says. The officer also found two pills on him that later were determined to be oxycodone, according to the report.

Jones was on the Sebastian County Circuit Court docket Wednesday to enter a plea involving the firearms possession charge. Jones didn't appear in court, and a petition to revoke his $5,000 bond was filed.

Jones' attorney in that case, Norman Honeycutt of Fort Smith, filed a petition Thursday to withdraw as his attorney, according to court records.

Robb said he ran into Jones last Friday, a few days before his court date, at a local restaurant. He said Jones told him he expected to serve a short amount of time in prison and that he seemed fine with that.

"He didn't have any problem with the jail time," Robb said. "I don't know what happened between that time and [Wednesday]."

According to Hollenbeck, the sheriff's office received a 911 call about 7 a.m. Wednesday that Billy Jones had gone to his father's home, on property contiguous to his own, to take some tools and that he pulled a gun on his father before going back to his own property.

Minutes later, he said, deputies and officers with the Greenwood and Hackett police departments began arriving and reported that Jones was wearing a ballistic vest and pointing a rifle at them.

Sebastian County sheriff's spokesman Investigator Philip Pevehouse said Cooper and Spells were not the first officers to arrive but were in the growing waves of deputies and officers who headed to the rural home when Jones started shooting.

The officers and deputies who arrived took up positions under cover around Jones' mobile home. They also exposed themselves to the gunfire as they moved Jones family members and neighbors who had been trapped out of the line of fire.

Pevehouse would not comment Thursday on whether officers returned fire, because that was part of the state police investigation.

Cooper and Spells were shot minutes apart about 7:40 a.m., and officers again ran into the line of fire to pull the two officers to safety. Both men were taken to a Fort Smith hospital, where Cooper died.

Jones holed up in his mobile home, refusing to talk with a negotiator, until he surrendered at 11:46 a.m.

Information for this article was contributed by Lisa Hammersly of the Arkansas Democrat-Gazette.