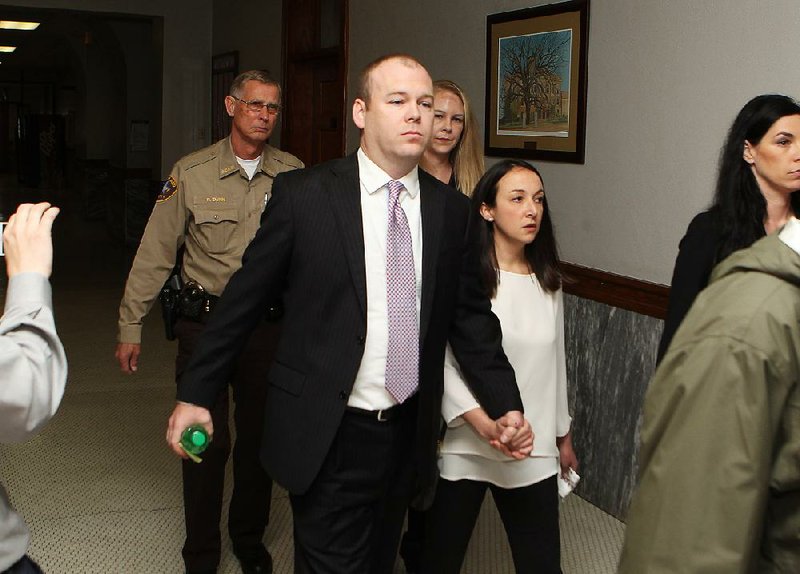 HOT SPRINGS -- Garland County Circuit Judge Wade Naramore and his wife, Ashley, wanted to celebrate their five-year wedding anniversary on the evening of July 24, 2015, with their 17-month-old son Thomas by their side.

Wade Naramore left the courthouse midday, picked up steaks and wine, then bought his wife a certificate for a day at a spa before heading to his home on Belaire Loop. He packed a bag with Thomas' swimming gear and cut a few grapes and strawberries in half so the fruit could fit in Thomas' tiny hands. About 3 p.m. he headed out the door toward the day care at First United Methodist Church.

In his car, he called his mother-in-law to let her know that he was picking up Thomas that day to take him to swimming lessons and then back home for the anniversary family dinner.

As he took a sharp curve in the road, Naramore heard a sound in the back seat.

Then he saw a tiny foot dangling from Thomas' car seat.

"I freaked out," a distraught Naramore is heard telling Hot Springs detectives on a videotape of a police interview conducted in November.

As jurors watched the video Wednesday on the third day of Naramore's negligent-homicide trial, some wiped away tears while others scribbled notes. One juror glanced at the defense table where Naramore, 36, cradled his face in his hands as he sobbed.

The state rested its case against Naramore about 4:30 p.m. Wednesday after hearing from three witnesses that day and 10 the previous day.

Special Circuit Judge John Langston denied a motion for an immediate innocent verdict from defense attorney Erin Cassinelli -- who said the state failed to prove its case -- before turning the trial over to the defense to call its witnesses.

Earlier in the day, jurors heard the 911 call from Naramore that was made after he stopped the car in the middle of the road and ran to grab Thomas from his car seat. Screaming for help, Naramore sat on the grass cradling his son as he called 911.

"I need a ... I need somebody to contact me immediately. My son's in the car, and, and I, and I...He stayed back there," Naramore is heard telling the 911 operator.

When the operator asks Naramore what's wrong, Naramore wails, "It's too late! I think he's dead!"

Ashley Naramore wailed loudly from her seat in the front row directly behind her husband. She bent forward, clutching her stomach as family members surrounded her and then led her from the courtroom.

At the defense table, Wade Naramore broke down in sobs.

During each recess at the trial, Wade Naramore walked out of the trial arena to gather his wife in his arms, rocking her back and forth as she cried.

In the video of the police interview, detective Mark Fallis asked Naramore about rumors that he was having an affair at the time of Thomas' death. Naramore denied the accusation, saying he "never even kissed" another woman since he first began dating his wife.

In the video, Fallis tapped his hands on a file in front of him and tells Naramore that he has her name in the file.

Fallis said the name was not in the case file, but that special prosecutor Scott Ellington had received an anonymous tip with the name of a woman with whom Naramore was allegedly having an affair.

Benca asked if in his investigation any evidence of infidelity was found.

Benca also questioned Fallis about several witnesses who were not questioned, including certain daycare workers, Naramore's father-in-law or Thomas' pediatrician.

Dr. David Slay, who had cared for Thomas since he was 2 days old, was the defense team's first witness.

Slay testified that Thomas was well cared for and there was no evidence of abuse or neglect. Cassinelli then asked him if he had ever forgotten his own child in the car.

"I have had a near miss," he said quietly.

When his youngest child was 2 years old, Slay said, he was exhausted after being on call all night and was consumed with thoughts of a sick patient. The next morning he pulled into the parking lot at the hospital, opened the back door to get his lab coat and discovered that he had forgotten to drop his child off at daycare.

If not for the lab coat in the back seat, Slay testified that he "would've rushed upstairs to see the patient I was worried about" and left his child in the car.

On cross examination, deputy prosecutor Thomas Young asked Slay how many patients out of the thousands he has seen in his 16-year career were left in a hot vehicle.

On redirect, Cassinelli asked Slay if it were possible that some of his patients had been left in hot vehicles but the parents did not report it.

Slay shrugged then said, "You know, I didn't tell anyone when I had my near miss."

The trial will resume at 9 a.m. today at the Garland County Courthouse.