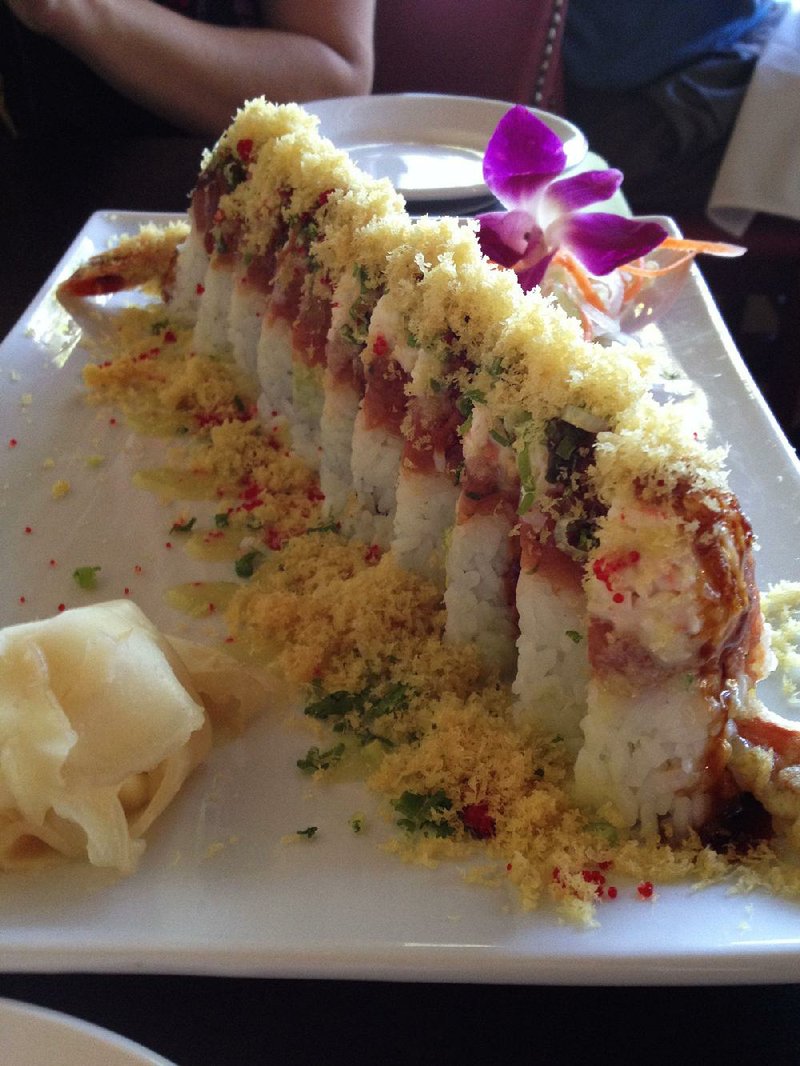 The Crazy Lover Roll (tempura shrimp, crab stick, avocado, salmon) is one of the specialty rolls at Kemuri, which MSN has picked as the best sushi restaurant in Arkansas.

The conversion of Best Impressions, the restaurant at the Arkansas Arts Center in MacArthur Park, 503 E. Ninth St., Little Rock, to Canvas, as well as the full introduction of new owner/chef Brian Kearns' (formerly of Arthur's Prime Steakhouse and Ocean's at Arthur's and the Country Club of Little Rock) menu and the official grand opening, will be Sept. 29, says manager Paul Cookman. You will recall we reported a couple of weeks ago that catering company Simply the Best founders Rob and Martha Best were retiring and had sold off the company and the Arts Center restaurant to Kearns. He says that to use as many locally sourced ingredients as possible, he'll change the menu at least seasonally and possibly more often. Hours will remain 11 a.m.-2 p.m. Tuesday-Friday, 10 a.m.-2 p.m. for Saturday and Sunday brunch, and it'll continue to be available for private evening events. Reach the restaurant by phone through the Arts Center's main number, (501) 372-4000.

Kemuri sushi, seafood, robata, 2601 Kavanaugh Blvd., is Arkansas' listing in MSN's online list of best sushi restaurants in every state, which surfaced last week (tinyurl.com/kemurisushi). No indication of what criteria they used to make the selections, but on the cover page, author Lauren Katzenstein explains, "Road tripping across the United States sounds like an unforgettable adventure. Knowing which sushi restaurants to stop at along the way sounds even more satisfying. Don't think that just because you are in the middle of the U.S., hundreds of miles from a body of water, that it is impossible to get good sushi. There are great options out there, and I'm here to tell you where to find them." Her description for Kemuri: "Some of their most awesome rolls -- with equally awesome names -- including 'The Crazy Monkey,' 'Golden Boy' and 'Spicy Girl.' A crowd favorite is the Surf and Turf Roll [pictured on the page], which has soft-shell crab, spicy crab, blue crab, cucumber and mango, topped with filet mignon."

The Tennessee-based Ruby Tuesday chain reported last week it would be closing 95 "underperforming" restaurants, but hasn't yet said which of its 724 outlets in 44 states (including Arkansas restaurants in Bryant, Conway, Russellville and Jonesboro) and 14 foreign countries will feel the ax. We'll keep you posted.

The Arkansas State Archives will host its third annual Arkansas foodways symposium, with the theme "Southern Fried Schnitzel: German Food and Culture in Arkansas," 10 a.m.-3 p.m. Sept. 10, at the Pulaski Technical College Culinary Arts and Hospitality Management Institute, Interstate 30, Little Rock. Topics will include German-style beer brewing in Arkansas, a history of early Germans in Little Rock, German foodways history in Arkansas and anecdotes and stories about German food and its importance in Arkansas history and culture. Chef Terra Titsworth, formerly of the Packet House, will give a cooking presentation, preparing a traditional meal from the German-speaking principality of Lichtenstein. The symposium will also include a German-fare lunch prepared by Culinary Institute chefs and a beer tasting. Partial funding comes from the Arkansas Humanities Council. Admission is free but registration is required; deadline is Sept. 6. Call (501) 682-6900 or email events.archives@arkansas.gov.

And a correction: Our report on the pending DQ Grill & Chill at West 12th Street and South University Avenue, Little Rock, indicated that its neighbor would be the city's first CVS store. The actual first such store has been open for several months at 8902 Geyer Springs Road, at Baseline Road. CVS has also taken over the pharmacy inside the Target store at 12700 Chenal Parkway.