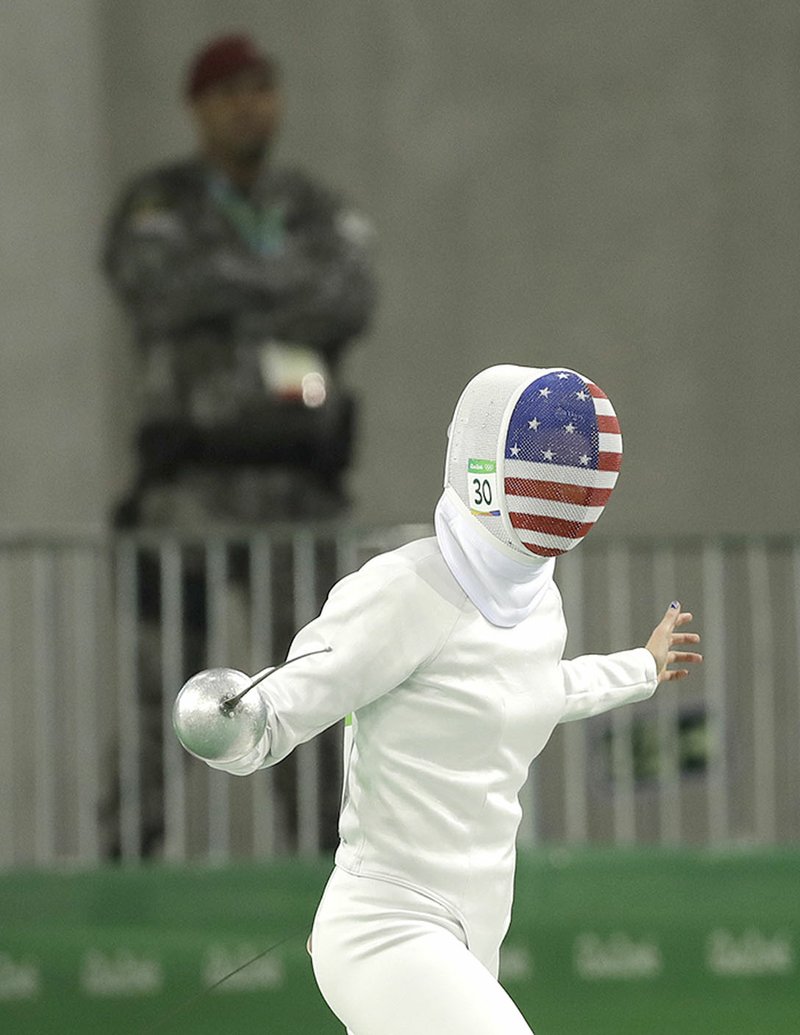 Margaux Isaksen of the United States competes Thursday during the fencing portion of the women’s modern pentathlon at the Summer Olympics in Rio de Janeiro, Brazil.

RIO DE JANEIRO -- One sister came to the Rio Olympics to experience it for the first time. The other came for redemption.

Lewis goes on birdie spree, trails by 1 Police: Swimmers lied about robbery Ashok gives hope to India on the course Olympic roundup Bolt gets 8th gold, but no record

Isabella and Margaux Isaksen have the same goal -- to win the modern pentathlon for the United States. They kicked off the first day of competition Thursday with the fencing portion, one-minute, head-to-head bouts that established their rankings going into the other four events today.

Isabella Isaksen, 22, finished in eighth place among the 36 athletes with 220 points. Her older sister finished 14th with 208 points, despite an apparent injury to her ankle.

The sisters, originally from Fayetteville, will compete next in an all-day test of running, swimming, shooting and horseback riding today.

While this is the first Olympic experience for Isabella. For Margaux, 24, the stakes are different. She competed in the 2008 and 2012 games, finishing fourth in London, where she was two points short of a medal.

She is competing five weeks after surgery for a stress fracture. She said she's done everything in her power to overcome the injury and compete.

"I just want to do myself proud, to my family proud, do my country proud by fighting until the very end," Margaux said.

In the year following her fourth-place finish at the London Olympics, Margaux said she replayed every moment.

"I would just think about that one touch or that one rail that fell," she said. "Being so close and losing by such a close margin ... that was really what fueled me moving on into the next four years. That was why I decided to continue with pentathlon."

Margaux was 16 years old when she went to Beijing, a "bright-eyed little kid," she said, who "didn't fully appreciate what the Olympics meant."

She was 20 years old in London and "hyperfocused" on winning, she said. She had just come back from a case of mononucleosis that interrupted her training six months before.

"Proceeding onto London, there was so much pressure," she said. "I didn't get to enjoy the Olympic experience the way I can now."

"Being at the Olympics is an amazing enough experience, but it's really heightened being able to be here with my sister," Isabella said.

Raised on a farm in Fayetteville, the sisters grew up running and riding horses. When they visited the Arkansas Fencing Academy, the academy's founder and coach, Neal Picken, encouraged Margaux to try pentathlon.

The sport intrigued her. Originally created for the modern Olympic games in 1896, the pentathlon included five events modeled after the required skills of a soldier: fencing, shooting with a pistol, a 200-meter freestyle swimming race, show jumping on a horse and a 3,200-meter cross-country run.

With Margaux already familiar with three of the events, she left Arkansas and her family behind at 15, packing her bags to attend a training camp in Colorado Springs.

She got off to a rough start, at times crying because she couldn't complete a flip turn in the pool. Because her proficiency in swimming was in doubt, she said she was told she'd never be a pentathlete.

Two years later, she made her first Olympic team.

"I've really grown up in the sport of modern pentathlon under the Olympic spotlight," Margaux said.

She fell in love with the sport as she traveled the international circuit as a teenager. But with her sister back home in Arkansas, the sisters -- who had grown up so close -- began to grow apart. Then Isabella moved to Colorado to train. The pentathlon brought the sisters back together.

"When Isabella decided to move to Colorado Springs and pursue pentathlon, it really tied us even closer than we were before," Margaux said.

After making the decision to pursue pentathlon four years ago, Isabella knew she was getting a late start, but she was also determined to make the Olympic team.

"It's really comforting to have my sister -- my best friend -- with me," Isabella said. "It's been quite difficult starting the sport so late in the game, but fortunately I've had my amazing sister to show me the way."

Their road to the podium will be difficult. The defending Olympic champion, Laura Asadaukaite of Lithuania, finished Thursday in 11th place, between the two sisters. Two days before the competition, Margaux picked Asadaukaite to be one of her top competitors.

"I think there are 10 girls, myself included, that could win," Margaux said. "Laura's definitely one of them. She's going to be a strong contender to beat, but I think you're going to see a fight out there."