Cornerback's year over with torn ACL 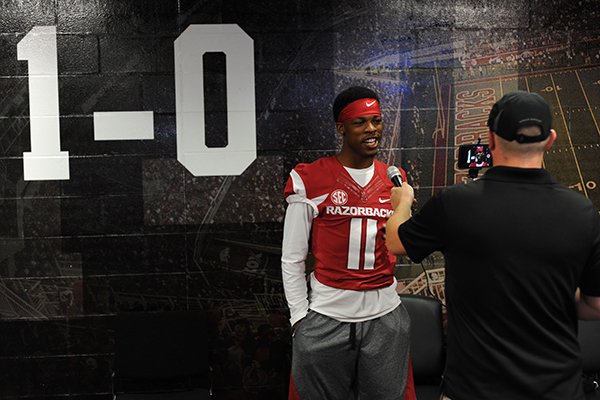 Arkansas sophomore defensive back Britto Tutt answers questions from members of the news media Sunday, Aug. 7, 2016, during the team's annual Media Day activities in the Fred W. Smith Football Center on the university campus in Fayetteville.

FAYETTEVILLE -- Arkansas cornerback Britto Tutt, a junior college transfer from Ventura (Calif.) College, suffered a torn anterior cruciate ligament in his knee during practice Wednesday and is lost for the season.

"He's got a redshirt year available to him, so we'll redshirt him and he'll have three years of eligibility remaining," defensive backs coach Paul Rhoads said.

Tutt's injury came just after Coach Bret Bielema touted the team's depth at cornerback. With starters Jared Collins and Henre Toliver supplemented by Ryan Pulley, Tutt and swingman Kevin Richardson, Bielema suggested Wednesday that D.J. Dean, who suffered a hamstring injury earlier this week, might be a candidate for a redshirt. That scenario appears to be over.

"It's hard to keep a great player on the bench," Rhoads said. "With Britto coming along, that may have been a possibility, but we have very little doubt D.J.'s going to be full strength in time to help us for the entire season."

Rhoads said Byron Keaton and Cornelius Floyd are now the fifth and sixth cornerbacks and both are getting plenty of reps given Arkansas' frequent use of nickel packages.

Beanum, a 6-4, 251-pound junior from Forrest City, went through the first of two mandatory practices in shorts Wednesday night and took part in his second Thursday. Beanum, who was not originally on the 105-man roster because of personal issues, would be eligible for Saturday's scrimmage if the Razorbacks practice twice today.

"It's great to have Tevin back out there," defensive line coach Rory Segrest said. "He was there for us all summer and you could tell. He picked up where he left off and he's looking good right now."

Beanum made eight starts last season at the rush end position and posted 24 tackles, including 2 sacks and 5.5 tackles for loss. He'll join the group at rush end, where junior Karl Roesler and freshman McTelvin Agim have worked in camp.

"He came back in great shape, so it's just a matter of getting him back in full pads and getting him hitting," Segrest said. "Obviously that's the one thing he hasn't had since last year."

Beanum missed most of spring drills dealing with a family matter. Segrest said Beanum had to earn his way back to the starting unit.

"We've got plenty of time before this first game, so that depth chart may be fluid until then," he said.

Offensive line coach Kurt Anderson is convinced that unit will benefit during the season for having worked every day against the Arkansas defense.

"The one thing that I know from these practices is that we've got a pretty salty defense," Anderson said. "So there's going to be ups and downs every day in practice. What I like is if there's been a day or a practice where we kind of get it handed to us, then you go in and you film review and you go out the next day ... and have a really good practice, and that's a really good defense over there.

"I thought today was great, and they responded after having back-to-back practices where we got it handed to us in my opinion."

Receivers coach Michael Smith said it's starting to look like his unit has been running hard for two full weeks, including some two-a-day practices.

"You can tell we're starting to get some camp legs," Smith said. "Guys are starting to slow down, getting little nicks and groins starting to tighten up, but the guys have been fighting through it.

"It's been a great opportunity for me to get a lot of those young players in and trying to get them acclimated. It's been going well. I love the effort, but we're winding down camp and you can kind of see some guys starting to get tired."

Smith said he expects to give some reps to all his players in Saturday's scrimmage, including senior Keon Hatcher, who has been in a green no-contact jersey all week after falling on his shoulder.

"We'll talk about it here in the next day or so about what we're going to do on Saturday," Smith said.

Junior Khalia Hackett has regained the No. 1 spot at strong-side linebacker in his competition with senior Josh Williams.

"I've got Khalia in that position," linebacker coach Vernon Hargreaves said. "He had a pretty good scrimmage last week, did a nice job out there. I'm kind of splitting those guys a little bit, with the lean a little bit more toward Khalia right now."

The Arkansas football program has extended a helping hand to the actor Chris Severio, a native of Baton Rouge, who plays the role of Brandon Burlsworth in the upcoming film Greater.

According to Laura Rutledge of the SEC Network, Arkansas sent gear to Severio, whose home sustained damage during the flooding around Baton Rouge. Rutledge tweeted out the gesture Thursday, adding that Belk was donating some clothes for Severio.

"He's a combination of a weirdo, a comedian and a genius," Ragnow said. "He's been around so many good football players and he knows so much good technique. He knows everything.

"But then he'll say the weirdest things, He's funny, too. I think it's great for the younger linemen, because he knows when to get on you, but he also knows when to lighten the mood."

Anderson, who spent the past three seasons as the offensive line coach with the Buffalo Bills, smiled when told of Ragnow's assessment.

"Playing at an SEC school -- especially in the SEC West for Arkansas -- for a young man could be a stressful situation in terms of the pressure that we put on these guys to get better on a daily basis," Anderson said. "Sometimes just a little bit of levity when it warrants itself is good.

"I don't know if I'm weird or I just reference things sometimes they've never heard about. If I quote the movie Fletch, they have no idea what I'm talking about, so of course they think i'm weird. I think it's funny. Then it's time to move on to football."

• The Razorbacks will participate in the annual kickoff luncheon today at the NWA Convention Center in Springdale. Doors open at 11:30 a.m. for the program, which is expected to last about 90 minutes and features speaking roles for Coach Bret Bielema and coordinators Dan Enos and Robb Smith.

• The Razorbacks worked inside the Walker Pavilion on Thursday as dark storm clouds and rain swept across campus.