Wal-Mart internships both a trial and tryout 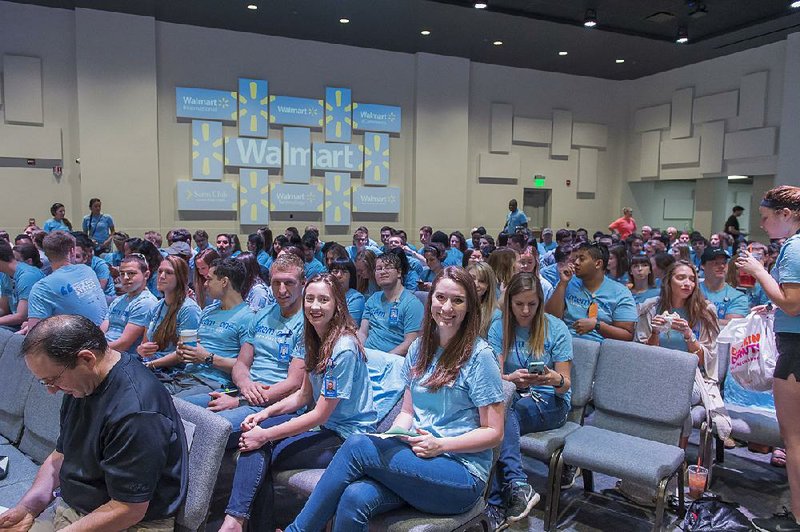 Wal-Mart interns gather in an auditorium for an informational session. Wal-Mart typically offers jobs to at least 75 percent of its interns.

Don't leave food in the refrigerator on Fridays. It won't be there when you return.

"I didn't know they empty out the fridge," said Plyler, who will be a senior at the University of Arkansas this year. "So I lost some Tupperware. But I'm OK. I've recovered."

The unfortunate experience was just one small takeaway from her summer as an intern at Wal-Mart's corporate office in Bentonville. Plyler was among a group of 275 undergraduate and graduate students selected for a 10-week program that exposed the group to various layers of the retail giant.

The interns were salaried employees for the summer and treated as such, tasked with challenging projects and meaningful duties that provided a sense of what it would be like to have a full-time Wal-Mart position after college. It also gave the company a first-hand look at the capabilities of future employees as it seeks to bolster its corporate workforce, especially in key areas of need like Wal-Mart's technology, merchandising and replenishment divisions.

"Every intern we hire, we hire with the intent of them coming back either into a return internship position or a full-time hire," said Myranda Bertrand, senior manager of Wal-Mart's corporate internship program. "We don't like to hire interns that are just temporary help. We want them to have a career here and grow."

Bertrand knows. She was an intern in 2011 and was offered a full-time position at the end of her summer at Wal-Mart. Bertrand had her sights set on being a career counselor and didn't initially have an ambition to work for the company long term, but her plans changed after being offered the job.

Now, Bertrand is part of an intern leadership team that consists of two parts. The first works to recruit, interview and hire candidates from colleges all over the country. The second coordinates and oversees nearly every aspect of their experience during the 10-week program.

In addition to the home office interns, there were 13 others stationed at Walmart Technology in Reston, Va. Thirty more worked at distribution centers around the country.

The largest contingent of Wal-Mart interns come from the University of Arkansas. Other schools in the region like the University of Texas, Texas A&M and Oklahoma State also are represented. The retailer also attracts applicants from prestigious institutions like Harvard, Columbia, Duke and Cornell.

"Wal-Mart is a great place to get an internship," said Matt Waller, dean of the University of Arkansas' Sam Walton College of Business. "They're very structured in how their processes work, and they're also very good at measuring performance. It teaches students the importance of good execution, measuring performance and accountability. They also learn Wal-Mart has a lot of best practices that many other companies are trying to learn. So they get to see it firsthand."

Most of the UA students didn't require housing for the summer. But interns from other parts of the country moved into hotels. Transportation was arranged, if needed.

Wal-Mart didn't disclose how much interns were paid, but said it varies based on their level of education. First-time interns are at the bottom of the pay scale, while graduate students earn more.

No matter what the pay or experience, Wal-Mart doesn't want interns to spend the summer without being challenged. Departments requesting interns are required to provide robust projects, most of which will span the bulk of the 10-week program.

"I told my dad, who works at J.B. Hunt, there's no way there's a project that's going to take me 10 hours a day for 10 weeks," said Katie Christian, a University of Arkansas senior from Rogers who worked with the consumables team during her internship.

But it didn't take long for Christian and others to understand their internships would involve much more than fetching coffee, making copies or getting a basic overview of Wal-Mart.

"I had an aggressive project and my manager was pushing me every day," said Sukhmaan Rathore, who is working on a master's degree in computer science at Missouri University of Science and Technology in Rolla, Mo. "There was a time I was thinking, 'Gosh, this is not how internships should go.'"

Rathore said he eventually produced an application that will be used by Wal-Mart's finance department. Christian worked on a project throughout the summer that resulted in the development of 15 private-brand hair care products expected to land on Wal-Mart shelves. Others worked on tasks aimed at helping the company operate more efficiently.

Kelsey Casey, a University of Arkansas senior, worked with two other interns on a supply chain optimization project she said will save the company $6.5 million. The result is something the apparel major, who was hired as a food merchandising intern for the summer, didn't anticipate.

"I got to do something that I never would've thought I could do," Casey said. "Now that I've done it, I know I can pick up anything and learn it even if it's something extremely foreign to me."

While the projects required time, there were opportunities for other important aspects like networking with executives, managers and other employees throughout the summer.

Some even got a taste of business travel with day trips on a corporate jet, getting a closer look at Sam's Clubs in Baltimore or Wal-Mart's technology's operations in Reston.

"I went over there and got to see a different market view and see a different culture," said Plyler, who is a finance and business analytics major. "That was very beneficial."

The experience and exposure gained from internships with companies like Wal-Mart have become increasingly important for college students and employers.

A job at the end?

According to 2015 data from the National Association of Colleges and Employers, companies converted an average of 51.7 percent of their eligible interns into full-time hires.

"Internships are an important part of the recruiting and hiring funnel," Sigelman said in an email. "It's an opportunity for students to prove they have the skills employers need, and building that track record is increasingly important to how employers recruit."

Wal-Mart isn't alone in viewing its interns as the future of the company.

A J.B. Hunt spokesman said the company has 113 interns, most of whom are working at company offices across the country. Tyson had more than 250 interns, according to a spokesman.

Wal-Mart's 10-week program ended Aug. 12. Many interns go back to their respective schools with offers to return to the world's largest retailer as well, turning their summer experiences into actual jobs. Plyler, Casey, Christian and Rathore were among the interns who were extended offers to join the company after graduation.

Tryson Lindley, a computer engineer major at UA who admitted he was unaware of the depth of Wal-Mart's tech department when he first spoke with recruiters at a STEM fair. But after completing his internship, Lindley now has an opportunity to start his career at Wal-Mart.

"My confidence has been boosted through this summer," Lindley said. "It's just crazy to know you're working for the biggest company in the world and to know that you've succeeded. It's definitely going to help as you try to pursue other endeavors or come back to Wal-Mart."

Print Headline: Wal-Mart internships both a trial and tryout