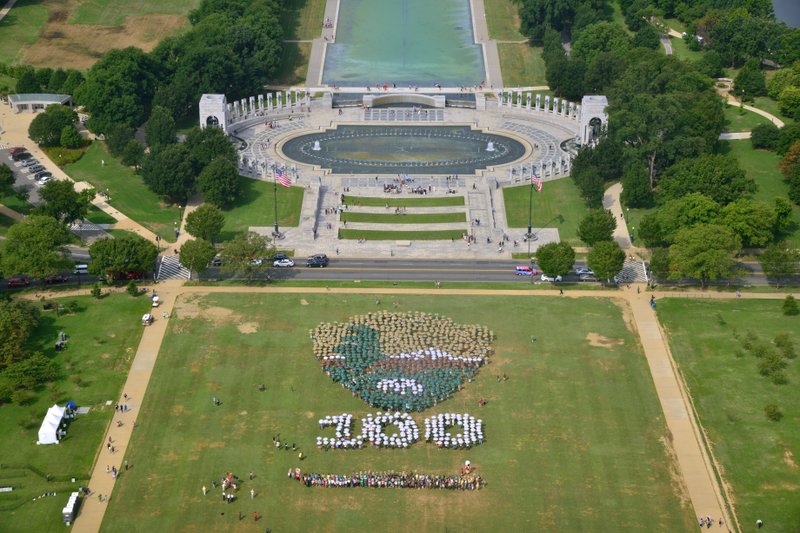 The National Park Service celebrated its 100th birthday on Thursday with events across the United States including the creation of a living version of its emblem in Washington, D.C., a naturalization ceremony on the South Rim of the Grand Canyon and an outdoor concert at Yellowstone National Park.

The centennial came as the agency, which manages national parks as well as historic places, welcomed a new national monument and nature forced some changes in a party in the West.

More than 1,000 children and adults used brown, green and white umbrellas to create a living version of the Park Service emblem on the National Mall, which the agency photographed from a helicopter above. The emblem contains elements symbolizing the major facets of the national park system. A Sequoia tree and bison represent vegetation and wildlife, mountains and water represent scenery and recreation and the arrowhead shape represents history and archaeology. The first 1,000 participants were allowed to keep their umbrellas and got T-shirts commemorating the event.

On Wednesday, President Barack Obama created the Katahdin Woods and Waters monument on 87,000 acres in Maine's North Woods donated by the founder of Burt's Bees, Roxanne Quimby. The land, which includes views of the state's tallest mountain, Katahdin, is cherished by American Indians, and its history includes visits by naturalist Henry David Thoreau and President Theodore Roosevelt.

The creation of the agency's 413th property was opposed by state lawmakers, and critics fear that it will hinder efforts to rebuild a forest-based economy in the region.

Quimby's son said many parks in the service's system have been criticized upon creation but "when we look to the future, we see huge amounts of success."

For a time, both fire and ice hindered travel into Yellowstone National Park on the Park Service's centennial anniversary.

Authorities closed a portion of the popular Beartooth Highway to the park's northeast entrance Wednesday night because of snow and ice from a summer snowstorm, but the road reopened Thursday morning.

At the other end of the park, a portion of the road leading to Yellowstone's South Entrance remained closed because of a wildfire. Visitors heading to Thursday's celebration and concert at the Roosevelt Arch from the south faced an hourlong detour into Idaho.

Interior Secretary Sally Jewell hiked to see the view from the Hidden Lake Overlook in Montana's Glacier National Park and met with scientists to learn more about how climate change could cause the glaciers to disappear there as soon as 2030. Jewell said climate change is a concern for the future of other national parks from Alaska to the Florida Everglades.

She also attended the celebration in Yellowstone.

The Park Service is offering free admission to all its sites through Sunday.

The free-admission days are among 16 free days scheduled throughout the centennial year. Some parks are serving birthday cake and offering ranger talks for the occasion. The Chesapeake and Ohio Canal National Historical Park in Maryland offered free mule-drawn boat rides on Thursday.