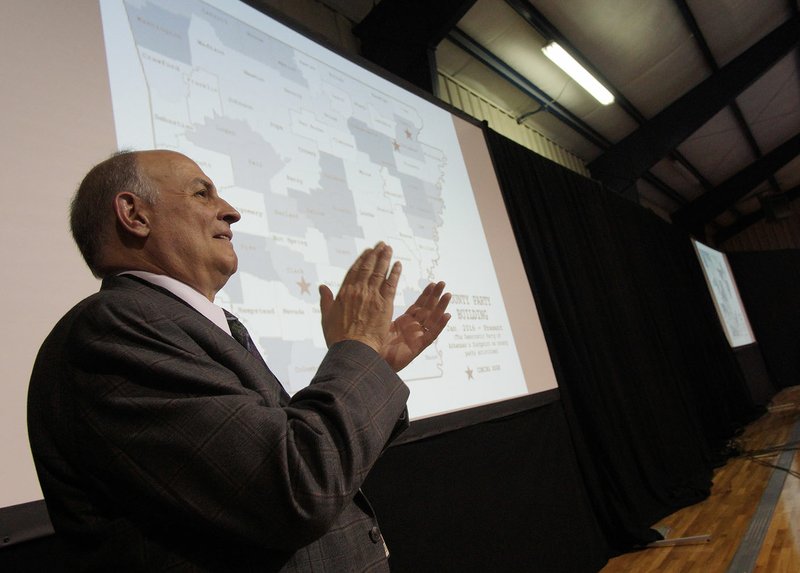 The backers of two competing medical marijuana initiatives found good news in their cause ending up on the platform of the Democratic Party of Arkansas.

Members of the party met Saturday to hear speeches and take care of business ahead of the Nov. 8 general election, including approving a platform. One of the planks is on medical marijuana.

The plank calls for "the development of a responsible medical marijuana program that will receive patients in need of such relief the freedom to access this remedy."

"It's an important step in our state's care of patients with certain critical illnesses," said party spokesman H.L. Moody. "There's a lot of evidence that shows sometimes that's the only thing that works. We think that if that is the case for patients, then that sort of treatment should be available to them legally."

The national platform states in part: "Because of conflicting federal and state laws concerning marijuana, we encourage the federal government to remove marijuana from the list of 'Schedule 1' federal controlled substances and to appropriately regulate it, providing a reasoned pathway for future legalization. We believe that the states should be laboratories of democracy on the issue of marijuana, and those states that want to decriminalize it or provide access to medical marijuana should be able to do so."

"I think there are a lot of candidates that have wanted to come out in support of medical cannabis and this gives them an incentive, or maybe more permission, to come out publicly in support," she said.

One such candidate is Conner Eldridge, a Democrat from Fayetteville who is challenging Republican John Boozman of Rogers for his U.S. Senate seat. Eldridge said Monday he supported the development of a responsible medical marijuana program in Arkansas and nationally.

"I see no legitimate reason to deny access to marijuana for people like my stepmother, who passed away from a recurrence of breast cancer in 2010," he said in a statement. "As a prosecutor, I believe law enforcement resources ought to be directed to far more serious offenses, including large scale drug trafficking involving methamphetamine, heroin, prescription drugs, and cocaine."

"Democrats of Arkansas need to differentiate themselves from the Republicans. We lost all these last elections because we've been running as Republican-lite," he said. "They take pre-K out; we put medical marijuana in. I'm liking where we're going."

On pre-kindergarten programs, Couch was referring to a decision by state Republicans earlier this month to remove any mention of pre-K programs from that party's platform.

He said many Republicans support medical marijuana. Other party platforms also touch on the subject.

No one from the Republican Party returned a call Monday seeking comment. However, Gov. Asa Hutchinson, a Republican who formerly headed the Drug Enforcement Administration, has said he is opposed to medical marijuana.

The state Libertarian Party favors "the repeal of all laws creating 'crimes' without victims, such as the use of drugs for medicinal or recreational purposes," according to its platform. The state Green Party's platform states that the "marijuana laws are long overdue for repeal."

Arkansas Surgeon General Greg Bledsoe, who is against both the proposed act and the amendment, said there's common ground between his stance and the state Democratic Party's platform. Bledsoe was appointed by Hutchinson.

"I want a responsible medical marijuana program as well," he said. "I want the marijuana plant to be studied. I want to squeeze all the medicinal value we can out of that plant. I want the compounds that show promise to be sent through the FDA approval process and I want those things to be used to help patients."

Bledsoe said a responsible program would focus on research and could have specific allowances for people with terminal cancer or severe epilepsy, but the proposed measures are too broad.

"We want to be giving medicine to people that is truly medicine -- that's safe and gone through the FDA approval process," he said. "I see this platform statement as very much in keeping where I stand on the issue."

The initiated act has qualified for the Nov. 8 ballot and is being challenged in court. The amendment backers are awaiting word from the secretary of state's office on whether they have enough valid signatures to qualify.

Couch worked with Arkansans for Compassionate Care on the proposed 2012 medical-marijuana measure that fell just short of approval in that year's general election.

He and Fults later split over a "grow-your-own" provision, and they pursued separate proposals for this election year.

Under the proposed Arkansas Medical Cannabis Act, a patient with a "Hardship Cultivation Certificate" would be allowed to grow up to 10 cannabis plants -- five mature plants and five seedlings -- in an enclosed, locked facility. A caregiver would be allowed to cultivate the plants.

The hardship certificates would be provided by the Arkansas Department of Health "based on documentation of the Qualifying Patient's lack of access to a Nonprofit Cannabis Care Center," according to the proposal. Nonprofit centers would serve as dispensaries.

Fults said the grow-your- own provision is essential to ensure affordability, but Couch said it hurt the efforts to legalize medical marijuana in 2012.

Another difference between Couch's amendment and Fults' initiated act is the number and type of marijuana facilities allowed.

The Arkansas Medical Cannabis Act would cap the number of cannabis care centers, which must be nonprofits, at one-twentieth the number of pharmacies that have obtained a pharmacy permit from the state Board of Pharmacy to operate within the state. There are 794 in-state retail pharmacies, according to the board, so there would be about a 40-center limit.

If more nonprofit centers are "necessary to provide convenient access to Usable Cannabis by Qualifying Patients in all parts of the state," the state Department of Health may issue more registration certificates under the proposed act.

The Arkansas Medical Marijuana Amendment would allow for intractable pain to be treated with marijuana. It is defined as "pain that has not responded to ordinary medications, treatment, or surgical measures for more than six (6) months," according to the amendment text. About 20 other qualifying conditions are also named in the text.

The Arkansas Medical Cannabis Act would allow the use of marijuana for those with intractable pain, which is "pain that has not responded to ordinary medications, treatment, or surgical measures for more than three (3) months," according to the act. About 55 other qualifying conditions are also named in the text.