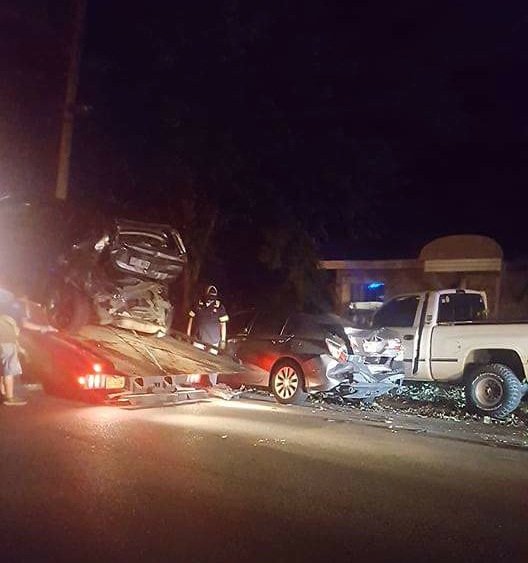 The scene of a car crash on Kavanaugh Boulevard that knocked out power to much of Little Rock's Hillcrest neighborhood overnight.

An accident involving a suspected drunken driver early Wednesday left residents of Little Rock’s Hillcrest neighborhood without power after his car struck a utility pole, according to police.

In a crash report, the Little Rock Police Department said the wreck occurred around 12:30 a.m. on Kavanaugh Boulevard just east of the Valentine Street intersection.

Authorities said Matthew Thomas McKelvey, 25, of Little Rock was driving east on the road in his 1997 Dodge 400 when he struck a utility pole and at least one parked vehicle, a 2012 Jeep Cherokee, on the road’s south side.

It was not immediately clear how a third vehicle, a 2013 Honda Accord, was involved and sustained damage in the accident.

McKelvey, who fled on foot after the crash and was later followed by a witness to the 400 block of Midland Street, told police that he was looking at his dog right before the accident occurred.

Richard Dean, an employee leaving his job at The Hillcrest Fountain bar in the 2800 block of Kavanaugh Boulevard, said he observed McKelvey driving at a speed of around 60 to 70 mph before seeing a bright light and hearing a loud crash that left the area in the dark.

More than 2,000 Hillcrest residents were without power at that time, according to Entergy's online outage map.

Glassy eyed during a test, McKelvey swayed and was unable to keep his balance, authorities said. He later admitted to being intoxicated.

While booking McKelvey into the jail, officers found plastic bags containing a white, powdery substance, which were then sent to the state Crime Laboratory for testing, police said.

McKelvey was booked into the Pulaski County jail on charges of driving while intoxicated, refusal to submit, leaving the scene of an accident and careless and prohibited driving, records show. His name did not appear in the jail roster as of shortly before noon Wednesday.