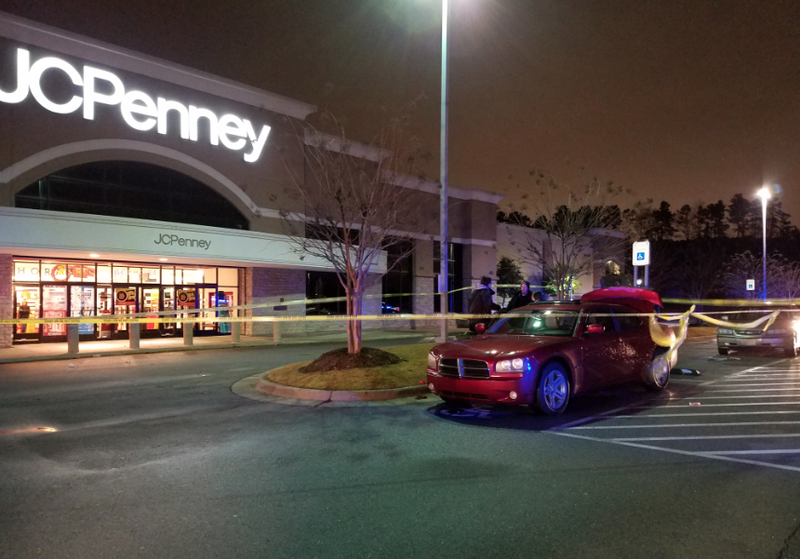 Crime-scene tape marks off a vehicle a young boy was riding in when he was fatally shot Saturday in Little Rock, authorities said.

A 3-year-old boy who died after being shot while riding in a vehicle was struck at least once by gunfire during a "road rage incident" in southwest Little Rock, authorities said late Saturday night.

Little Rock Police Department Chief Kenton Buckner said earlier that details surrounding the shooting were unclear after the boy was found shot in a car driven by his grandmother that arrived at a J.C. Penney in west Little Rock before 6:30 p.m. The child died from his injuries a short time later.

Lt. Steve McClanahan said in an email after 10 p.m. that investigators have determined the shooting happened during a "road rage incident" in southwest Little Rock.

"The grandmother was driving the car and was taking her grandson shopping when the incident occurred," McClanahan wrote. "We believe she and the victim were completely innocent and they have no relationship with the suspect."

According to a Little Rock police incident report released Sunday, the grandmother, 47-year-old Kim King-Macon of Little Rock, was driving with the 3-year-old and a 1-year-old in her 2006 Dodge Charger when the shooting happened in the 6700 block of Mabelvale Cutoff Road.

King-Macon told police a black Chevrolet Impala pulled up behind her while she was stopped at a traffic light and honked its horn, the report said, noting King-Macon then honked back.

"Ms. King-Macon stated that a black male then exited [the Impala] and fired one shot," the report said, adding King-Macon then drove to the shopping center and found the boy had been shot when she got him out of the vehicle.

No arrests have been made.

The shooting is the second in less than a month where a toddler has been fatally shot in Little Rock. A 2-year-old girl was fatally injured Nov. 22 by shots fired into her vehicle near South Harrison Street and West Charles Bussey Avenue.

"As you can probably understand that's very, very frustrating to our police agency, as it should be to our community," Little Rock police chief Kenton Buckner said, speaking Saturday night in the store parking lot near where the vehicle was marked off in crime-scene tape. "... We cannot have a community to where the least protected among us — being infants — are dying [in] these senseless crimes in our city."

Anyone with information about the Impala or its driver is asked to call investigators at (501) 371-4660.

A young boy was fatally shot while riding in a vehicle in Little Rock Saturday, the second similar case in the city in less than month, authorities said.

Police responded shortly after 6:20 p.m. to the parking lot of the J.C. Penney in the Shackleford Crossing shopping center in west Little Rock to investigate a report of a child who had been shot, Little Rock Police Department Chief Kenton Buckner said at that scene.

Investigators determined that the boy, who was reported to be about 3 years old, was shot while riding with his grandmother in a car that she then drove to the store, Buckner said.

Police believe the shooting happened somewhere in southwest Little Rock, the chief said, noting the exact location isn't known and it's unclear when it was determined the boy had been hit.

The boy — whose name has not been released — was later pronounced dead from his injuries at a local hospital. No other injuries were reported.

The killing comes just weeks after a Nov. 22 shooting where a 2-year-old girl was fatally injured while riding near South Harrison Street and West Charles Bussey Avenue.

"As you can probably understand that's very, very frustrating to our police agency, as it should be to our community," Buckner said, speaking in the store parking lot near where the vehicle was marked off in crime-scene tape. "... We cannot have a community to where the least protected among us — being infants — are dying [in] these senseless crimes in our city."

He said investigators had no details yet on a suspect or motive and he stressed that the investigation was just beginning and it was too soon to know if the latest killing was tied to any other crimes in the city. He encouraged anyone with information to call police

"This is about as frustrated as you can be as a public safety official or just a plain citizen who is sitting watching this tonight to think that these kinds of things are occurring in our city streets," Buckner said.

The death marks Little Rock's 40th homicide of the year.

A 3-year-old child has died after being found shot at a Little Rock department store, authorities said.

Police were called shortly after 6:20 p.m. to the J.C. Penney in the Shackleford Crossings shopping center in west Little Rock to investigate a reported shooting, dispatch records show.

The Little Rock Police Department said on Twitter that a 3-year-old shooting victim was located there, though the child is believed to have been shot at an undisclosed location in southwest Little Rock. Authorities initially said the shooting occurred at the store.

Police initially said the child suffered "serious" injuries. The agency reported shortly before 7:30 p.m. that the child had died. The death marks Little Rock's 40th homicide of the year.

No further details were immediately known.