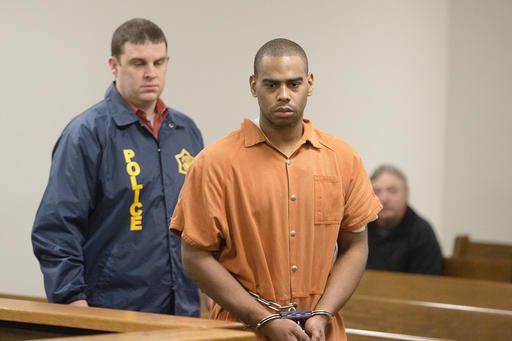 An inmate accused of killing a guard at an Arkansas jail has apologized in court.

The Texarkana Gazette reported that Tramell MacKenzie Hunter made the comments Monday during his first appearance in court on preliminary charges of capital murder and battery. Hunter is accused of killing correction officer Lisa Maudlin and injuring another officer in an attack Sunday at the Miller County jail in Texarkana.

The newspaper reported that Hunter said — in his words — "I just felt like she was messing with my life."

Judge Wren Autrey says Hunter will be transferred to a maximum security prison.

One correctional officer was killed and another was injured after an inmate attacked them inside the Miller County jail Sunday afternoon, authorities said.

Around 1 p.m., an inmate attacked officers Lisa Mauldin and Demaris Allen at the jail, located at 2300 East Street in Texarkana, the Miller County sheriff's office said in a statement.

Both women were transported to Wadley Regional Medical Center in Texarkana. Mauldin died from her injuries, and Allen was then taken to a hospital in Little Rock, the statement said.

The detention center was secured and it remained on lockdown Sunday night, authorities said, adding Arkansas State Police are investigating the attack. The name of the inmate who attacked the officers was not immediately available.

The statement said officials at the jail are asking for "prayers for the families of these correction officers and for the agency as we mourn the loss of one of our own."

Arkansas Attorney General Leslie Rutledge said Mauldin's death is a reminder that "the officers who guard our jails are in just as much danger as those who diligently patrol our streets."

“I commend the service of Officer Mauldin and know that she was a dedicated member of the force who never forgot the oath she took to protect and serve," Rutledge said in a statement.