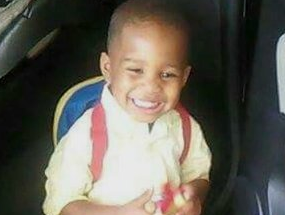 Acen King, 3, was shot and killed Saturday while riding in the back seat of his grandmother’s car.

Assistant U.S. Attorney Patrick Harris of the Eastern District of Arkansas said late Thursday that a man suspected of fatally a shooting a toddler during a traffic dispute in Little Rock had surrendered to authorities.

Gregory Holmes was arrested in the killing of 3-year-old Acen King, according to a U.S. marshal on the arrest team. An inmate named Gary Holmes was booked into the Pulaski County jail on a capital murder charge Thursday at 10:57 p.m. The reason for the name discrepancy was not immediately clear.

Further information on Holmes, including his age and city of residence, was unavailable Thursday night.

Acen was riding in the back seat of his grandmother's car Saturday night when a man got out of his vehicle at a stop light and shot at them, police reported. The boy was struck in the neck. He died from his injuries later that night at Arkansas Children's Hospital.

Little Rock police described the killing as an act of "road rage."

Earlier this week, the city of Little Rock and the FBI each offered a $20,000 reward for information that leads to the arrest and conviction of the gunman.