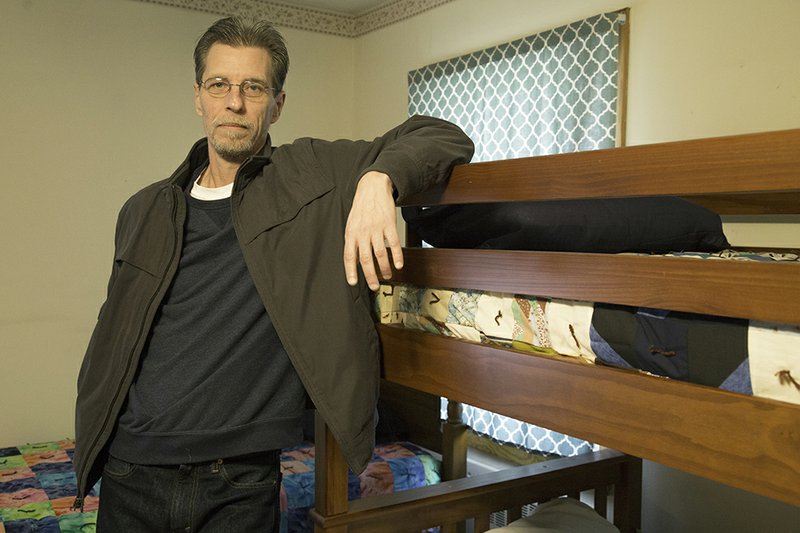 Bill Miller, shelter manager of The Taylor House Domestic Violence Shelter for Men, stands in one of the bedrooms at the shelter. Miller said he and his staff are learning more about male victims of domestic violence and hope to help many men in Independence County.

When most people hear the term “domestic violence,” their minds automatically turn to women or children in dangerous household situations. Men are often seen as the abusers in domestic-violence scenarios, but there are times when men are on the receiving end of abuse.

Family Violence Prevention has housed men in its private six-bedroom Safehaven Shelter in the past, but in October, the nonprofit opened The Taylor House Domestic Violence Shelter for Men. Duncan said that — as far as she can tell — it is the first registered shelter for males in the country.

“The past executive director of the Arkansas Coalition [Against Domestic Violence] went to a national conference and reported back that we are the first of its kind that is registered with a state coalition,” Duncan said. “We are very proud of that.”

Duncan said the shelter has housed five men since Oct. 1, and she expects more men to come forward as the word on the shelter gets out.

“We know there are more victims out there,” she said. “Those that we have housed are receiving good services, I feel.”

Shelter manager Bill Miller said he and his staff are learning more about domestic violence against men as the staff prepares to help the residents who go through Taylor House.

“It can be brothers, it can be father and son, it can be other family members, and it can be partners,” he said of the variety of abusers males encounter. “We just want to help.”

The home that now makes up the three-bedroom shelter was donated to the nonprofit by a local family.

“The late Dr. [Charles] Taylor and Rachel Taylor from here in Independence County built this home and raised their family in this home,” Duncan said. “After Dr. Taylor had passed away, Mrs. Rachel entered assisted living, and the home was just sitting there empty. Dr. David Taylor — who is a practicing doctor in Batesville [and Charles and Rachel’s son]— had made donations periodically to Family Violence Prevention, and Mrs. Rachel had volunteered from time to time.”

David and his mother approached Independence County Judge Robert Griffin and asked what they could do with the house to benefit the community. Griffin approached Duncan and asked if Family Violence Prevention could use the house in any way.

“We brainstormed in the office and with our board of directors,” Duncan said. “We thought about making a transitional home for single women who are exiting our current program, or [about] starting a domestic-violence shelter for men. We had been housing men in our current shelter right along with female victims.

“My perspective on that was we try to offer peer support, and I don’t want to necessarily segregate male and female, but let’s offer men a location that is run by their peers. It’s going to be easier for a male victim to go into a program and speak to someone about their feelings, their emotions, their fears, their concerns, to someone who may not judge them and may not look like an abuser to them.”

“Our grant cycle is from October to September, and we had 5 1/2 weeks from the day we received our actual funding to the day we opened,” Duncan said. “We went in and completely gutted and remodeled the kitchen, we ripped up the carpets and stained the beautiful original hardwood floors and got it furnished in 5 1/2 weeks. … The community really pulled together.”

Taylor House has nine beds — including one room that could be used for a man with children — and Duncan said there is space to add more rooms, either in the basement or the attic, in the future.

Duncan said she hopes men who are in dangerous situations will reach out to get help and that the stigma attached to male victims of domestic violence will diminish.

“Domestic violence is not just a women’s issue; it’s a family issue,” Duncan said. “A victim is a victim, and we want to help them become survivors in their own right.”

The hotline for Taylor House is (870) 569-8024 and is answered 24 hours a day. More information about Family Violence Prevention can be found at nofamilyviolence.webs.com.