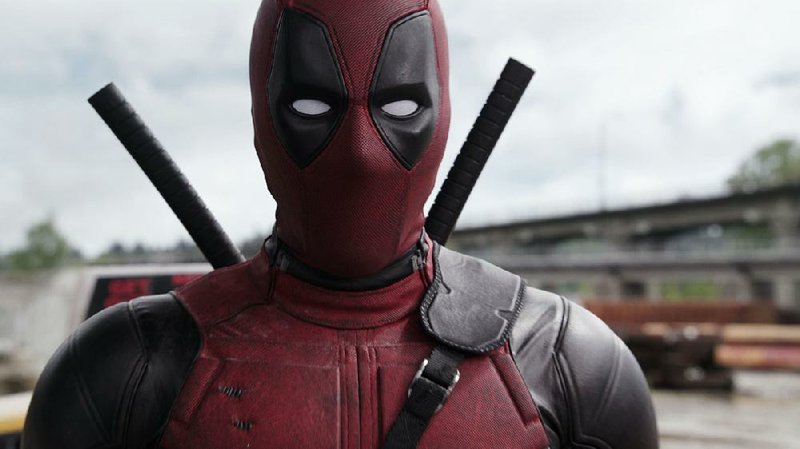 Deadpool (Ryan Reynolds) is a former Special Forces op with a chip on his shoulder and a nasty tongue in his mouth in Deadpool.

Deadpool rehashes just about every cliche from the Marvel Universe, but thankfully it does so proudly. Starting with a sarcastic run of opening credits and consistently infused with the title character’s vitriolic outbursts, the first solo outing for Marvel’s “Merc with a Mouth” gets by strictly on attitude. 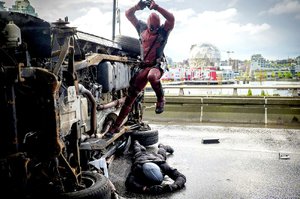 Back to those credits, they profanely ridicule all the conventions of a superhero movie, and the film manages to deliver on each one. (Although, it’s hard to tell if novice feature director Tim Miller is “an overpaid tool” without meeting him.)

Rating: R, for strong violence and language throughout, sexual content and graphic nudity and other essential elements of cinema

As with The Wolverine, Deadpool is very much a super anti-hero movie. Wade Wilson (Ryan Reynolds) is a charming fellow, in part, because he’s so unrepentantly rude. Despite a dishonorable discharge from the Army Special Forces, Wade is now enjoying his life as what may be the happiest mercenary in the business. His clients vary. One is a teen girl who contracts him to discourage a stalker.

His life seems to be on an upswing when he meets a young woman named Vanessa (Morena Baccarin from V) who can curse as confidently as he does. Their moments of carnal bliss are interrupted when he discovers that his own cells will kill him before enemy combatants will.

Dreading what cancer could do to him, Wade agrees to a radical new treatment. A shady physician named Ajax (Ed Skrein, whom the credits promise is a “British villain”) gives Wade a long, excruciating therapy. The malignancy disappears, and taking its place is an ability to recover from just about any wound.

The downside is that Wade, now dubbed “Deadpool,” looks like a waterlogged naked mole-rat. Ajax also intends to use him as a type of lethal automaton. Deadpool escapes and plots his retribution.

If the story line sounds routine, Miller and screenwriters Rhett Reese and Paul Wernick (Zombieland) eschew chronological order and shatter the fourth wall. Deadpool not only speaks directly to the audience, he delivers a series of Marvel and X-Men in-jokes and pokes fun at Reynolds’ Canadian roots. For every meta wisecrack that elicits groans, three others reward anyone paying attention.

Many were annoyed by Reynolds’ turn as the DC hero Green Lantern and wished he hadn’t bothered to appear in the regrettable Wolverine: X-Men Origins. Nonetheless, he’s an ideal choice for the role. With a long resume in comedy, Reynolds delivers the vulgar bon mots and punches with proper authority. He genuinely seems to enjoy being such an obnoxious twerp and becomes oddly lovable as a result.

Miller cut his teeth as a special effects expert and, as Deadpool continually reminds viewers, makes a modest production look more formidable than it really is. X-Man Colossus (voiced by Serbian actor Stefan Kapicic and motion captured by Greg LaSalle) looks like metal but has a full range of emotions.

Miller also manages to make flesh-and-blood performers look impressive, too. Skrein is so irritatingly smug that viewers can’t wait for him to wind up like Deadpool’s other targets, and T.J. Miller is at home playing a bartender appropriately called “Weasel.”

One thing that is refreshingly unusual about Deadpool is that the female characters aren’t simply superhero arm candy. Baccarin can cuss just as loudly as Reynolds and projects the right amount of vinegar. Leslie Uggams is a riot as Deadpool’s bling roommate who has as many vices as he does, while Brianna Hildebrand is delightfully sullen as X-Girl Negasonic Teenage Warhead. Try saying that five times fast.

Considering how Marvel and the studios it collaborates with seem determined to litter the world with sequels, it’s safe to expect one for this. Whether another installment will be any good can only be guessed. At least this one manages to be rewarding even during the closing titles.