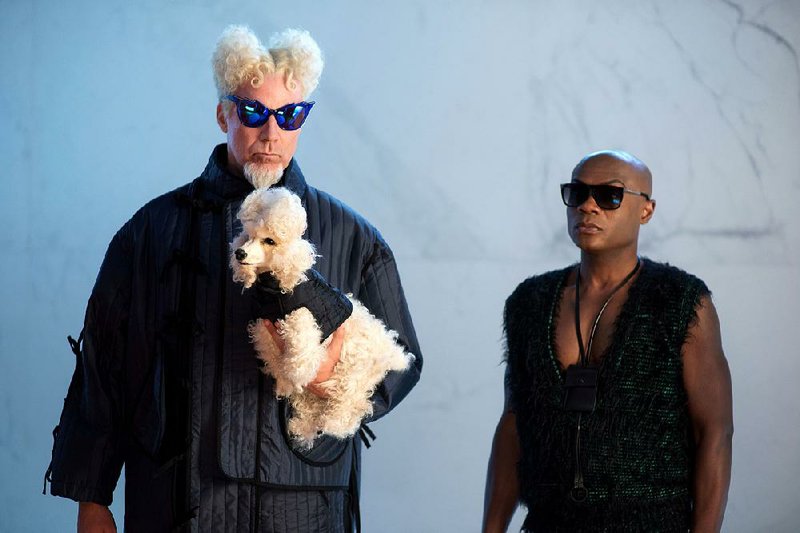 Will Ferrell is back as evil mastermind Mugatu, whose villainous nature clearly hasn’t been tempered by 15 years in Fashion Prison in Zoolander 2. Nathan Lee Graham (right) plays Todd.

Beyond a few notable exceptions, comedy doesn't travel particularly well. Consider it like a slice of fine cheesecake, when fresh and chilled, it's just about the best thing you can put on a fork. Left out for a couple of days on the window sill, and it would be a vile, disgusting pool of sick. 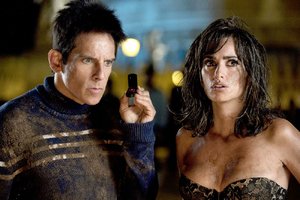 Derek Zoolander (Ben Stiller) and Valentina (Penelope Cruz) search for the mastermind behind the killings of some really good-looking celebrities in Zoolander 2.

Most comedy actors have a shelf-life of about 10 years. In fact, within each decade, you can quickly identify the comedian who dominated cinematic pop culture, their humor reflective -- and defining -- of the time period ('70s equal Woody Allen; '80s equal Eddie Murphy; '90s equal Jim Carrey; '00s equal Will Ferrell). Trouble is, once you establish your particular brand of humor as typifying a time period, with the sands in the hourglass moving constantly underneath us, it's all too easy for a comedian to get trapped at the bottom. (Anyone hear from Ernest P. Worrell or Pauly Shore in a while?)

Rating: PG-13, for crude and sexual content, a scene of exaggerated violence, and brief strong language

This is a particular problem with comedy sequels, especially those that have a long spread between installments (something like the Austin Powers trilogy might have worked a wee bit better because they were all released within five years of each other). Ben Stiller's Zoolander came out some 15 years ago. A spoof of fashion, and self-important models, it did modest box office initially, and carried itself a bit further on word-of-mouth on cable and DVD viewings.

Essentially, Derek Zoolander was a one-joke character: He was the world's most formidable male supermodel, but was an absolute dunderhead outside of the tightly cloistered world of fashion. In other words, Stiller didn't have to suffer terribly much to arrive at his character's modus operandi, the character played as if it was a bit he performed to amuse his wife, Christine Taylor, who co-starred as the love interest in the original, one night while they were bored.

Still, it had plenty of fun skewing the fashion world -- basically a rotund, motionless beach ball with a giant target hand-painted on it -- and brought several winning cameos from other comic actors, such as Justin Theroux and Will Ferrell, plus an endless sea of celebs playing goofy versions of themselves, which included everyone from Fred Durst to Donald Trump. Just why Stiller felt like now is the right time to fire up the leather pants and fur-covered smoking jackets again is unknown at press time, but, as becomes increasingly clear very quickly in this sequel, that is simply not a question anyone much bothered to ask.

As the film informs us over a series of flashback news broadcasts (et tu, Jim Lehrer?), the years haven't been kind to Derek since we last saw him. His school for kids ended up almost immediately crumpling into the Hudson River, as it was constructed out of the same flimsy materials the architectural scale model was built on. The accident killed Derek's wife (Taylor), and ended up costing him custody of his son, which caused him to drop out of fashion entirely and hide out in "Extreme Northern New Jersey" (which curiously resembles the snowy mountain peaks of Alaska) wallowing in his misery.

He's brought out of his lair by Billy Zane -- one of the film's more inspired casting choices -- who delivers a message from Alexanya Atoz (Kristen Wiig), now fashion's biggest and most ebullient designer, who demands that he come and lend his modeling skills for her new show in Rome. Hoping that the gig will result in him getting his son back, Zoolander flies out, only to run into his old friend Hansel (Owen Wilson), also invited to the gala event, a man he hadn't seen since the school accident left Hansel's once-perfect face horribly disfigured with a barely noticeable scar.

Eventually reconciled, the two friends go on to meet Don Atari (Kyle Mooney), a slacky millennial designer who is apparently all the current rage. After a horrible show of Atari's goods, where they are mercilessly mocked, the pair meet Valentina (Penelope Cruz), a comely Interpol agent who has been tracking a spate of curious pop music killings that have become an ongoing mystery, and get embroiled in yet another nefarious master plan of Zoolander's old enemy, Mugatu (Ferrell), who has been stuck in Fashion Prison (along with John Malkovich, wearing a Members Only jacket and mumbling "smart casual") since his last failed assassination attempt. Along the way, Zoolander also manages to reconnect with his son (Cyrus Arnold), and find his inner "face fire" that allows him to stop objects in midair, like something out of The Matrix.

That is pretty much that, and with not very much else to do, the film often resorts to a kind of Celebrity Laugh-In model, cramming scenes with as many peculiarly familiar faces as it can -- think Demi Lovato, Fred Armisen, Justin Bieber, Kiefer Sutherland, Willie Nelson, Katy Perry, Neil Degrasse Tyson, et al. -- and giving them a joke line or two for their day on the set.

Whatever inspiration first fed the original film has been bled pretty dry by this point, but what gives this film a special kind of unintentional poignancy is the way in which the comedy zeitgeist has largely passed by the main comic cast. Ferrell is always good to freelance his way through scenes that have no business being amusing otherwise, but you can't help but notice how long it has been since you've seen either Stiller or Wilson star in anything that has made more than a blip on the comedy pop-culture canon.

Early on, the film strongly suggests the fashion world has long ago gotten past Zoolander and Hansel, that their time has come and gone, and even if the inanely happy ending would suggest otherwise, it is perhaps the truest point the film ever attempts to make: These things have a short shelf-life, as one character points out, and when you've been overtaken, it's very difficult to move yourself out of the shadows of nostalgia. One would hope Stiller would have crafted a better epitaph for his comic career than this, but perhaps it is the most fitting way for him to go out.