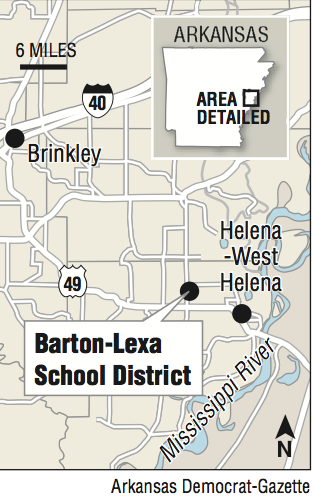 Map showing the location of the Barton-Lexa School District.

The Arkansas Board of Education on Thursday granted the Barton-Lexa School District four waivers of state law and rules that have previously been reserved for charter schools. 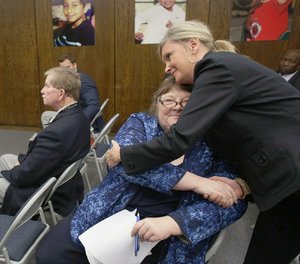 Photo by Melissa Gerrits
Public School Program Coordinator Mary Perry is hugged by Federal Programs Coordinator Tammie Moore on Thursday after the state Board of Education approved several waivers that Moore and Superintendent David Tollett of the Barton-Lexa School District had requested.

The approval made the 806-student district in Phillips County the fifth in the state to be awarded such a waiver after a law passed last year. That law allows school districts that lose students to charter schools to apply for and receive the kinds of waivers that have been granted to independently operated, open-enrollment charter schools.

The Education Board allowed the Barton-Lexa district to be more flexible with laws and rules on its school start date, teachers' daily planning periods, teacher licensure and a library media specialist. The changes will start July 1 and end in 2021, district Superintendent David Tollett said.

"We'll go back to our school district and sit down with the teachers to come up with innovative ways to rework the master schedule," Tollett said. "We'll put the systems in place to communicate support to the parents and students."

As part of the approval, district officials will work with Education Commissioner Johnny Key and the state Department of Education on providing data showing whether the charterlike waivers are helping the students progress.

Charter schools are public schools run in accordance with the terms of a charter or a contract with the state. They are exempt from some of the rules and laws that govern the traditional districts but are supposed to be held accountable for their student achievement rates.

With the waivers, the district plans to add more teaching time for educators, he said. They don't actually get all 178 days to teach, but use about 82 percent of that to teach before testing, he said.

One of the reasons the district wants to back up starting dates is to allow instructors to squeeze in another 8 percent of teaching time before students test.

Barton-Lexa will also let teachers move their planning period to the end of the day, a move that will free up the instructors to teach additional classes -- including electives -- without having to hire more staff, Tollett said. He added that it's hard to recruit teachers for schools in the Arkansas Delta because of the location.

That's forced the district to get creative in finding ways to fill the teaching void.

For example, Tollett said, the district was searching for a Spanish teacher and was forced to turn to Arkansas Virtual Academy even though some students don't thrive in that delivery method. Meanwhile, the district had found an instructional aide who could speak Spanish just as well as the other teachers.

Some of the aides have degrees and do well with children, but don't have a teacher's certification, he said. Other classes, such as keyboarding, don't need a licensed teacher, he said as he was making the case to allow the district to waive teacher licensure for noncore areas.

The last waiver was for a library media specialist. The district has two for each of its libraries in the elementary school and high school and is looking to incorporate more technology with a one-to-one student to tablet initiative, he said.

"Our technology needs are greater than our library needs," Tollett said. "You're not going to find a card catalog anymore. The world is changing. We need more of the media part of it than the library part of it."

The district will keep its specialists, but should one leave, he said the district would hire a technician instead to meet students' technology and the reading needs.

No one opposed the district's request for waivers, Education Department officials said.

Education Board member Jay Barth of Little Rock said he was concerned about the breadth of the waivers, especially regarding the teacher licensure one.

"I worry about the open-endedness of this one," he said. "If it is case-by-case, I feel like we've got some other waiver processes that can be employed on those cases. It feels like an openness that could quickly turn into some challenges, some real problems for yourself."

Tollett said he's seen KIPP Delta have success with hiring noncertified teachers and was sure it could be replicated in Barton-Lexa. The school district will mostly use that flexibility in hiring career-based areas and will be cautious in rolling it out, he said.

Many of the Education Board members were again concerned with the accountability of the school district. Charter schools can request exemptions, but the state board can revoke the charter if the school is underperforming. The law granting traditional districts the charterlike waivers -- Act 1240 of 2015 -- doesn't allow the Education Board to do the same for the traditional schools.

"I think my preference would that they be done in a systematic way so that there's a little more control .. of what's working and what's not working," Barth said. "It's a little more ad hoc than planned out. Some of these make sense, but I just wish that everybody was playing by the same rules and implementing a lot more assessment and evaluation so that we can move away from what's not successful."

Education Board member Susan Chambers of Bella Vista said she agreed with her peers' cautionary tone.

"In general, our students in the state are not performing at the level we want. In general, we are facing a teacher shortage," she said. "You're trying to find ways to compete, to innovate."

Chambers was the first to say that the board should establish some metrics for the district to report back.