Catch a star at the Rep 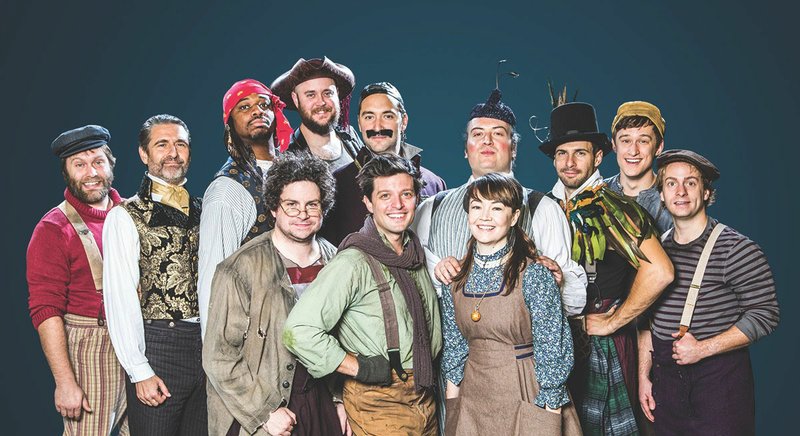 The stellar cast of Peter and the Starcatcher at Little Rock’s Arkansas Repertory Theatre.

A dozen stars took the stage Friday night, the stellar cast of Peter and the Starcatcher, and you can catch them yourselves for the next three weeks at Little Rock’s Arkansas Repertory Theatre.

The comparison for this play with music ( by Wayne Barker, book by Rick Elise, based on the novel by Dave Barry and Ridley Pearson) as being to Peter Pan what Wicked is to The Wizard of Oz is apt — an origin story that overlaps into the story we all know and love — but it goes farther than that.

The ensemble cast, playing roughly 100 roles, including the scurvy crews of two ships, narrators, natives of a South Sea island (with an Italian food accent, no less), crashing waves, crocodile jaws and cabin doors, superbly translates Elise’s script, which is frequently hilarious, always clever, all tongues planted firmly in cheeks for two and a half hours.

Most of the cast and director Mark Shanahan come out of the TheatreSquared co-production, which had a successful monthlong Fayetteville run before traveling to the capital city. Steve Pacek has pride of place as one of the two title characters, a miserable orphan who eventually becomes the Boy Who Won’t Grow Up; Faith Sandberg is his match as apprentice starcatcher Molly Aster, trying to return a trunk of precious star-stuff to her lordly father (Marc Carver), pursued by flamboyantly poetical pirate captain Black Stache (Hugh Kennedy) and his self-effacing sidekick, Smee (Patrick Halley), who help enhance a slight but distinctive Pirates of Penzance vibe.

Singling out individuals is a little dangerous, but prime protean kudos go to Bruce Warren, particularly in the roles of nanny Mrs. Bumbrake and a mermaid Teacher; Seth Andrew Bridges as most of the secondary villains (including orphanage ogre Grempkin and Mollusk Island chief Fighting Prawn) and co-orphans Nathaniel Stahlke as ambitious Prentiss and Garrett T. Houston as hungry Ted.

The show runs through through Feb. 14 at the Rep, Sixth and Main streets, Little Rock. Ticket information is available by calling (501) 378-0405 or online at therep.org/attend.

Print Headline: Catch a star at the Rep