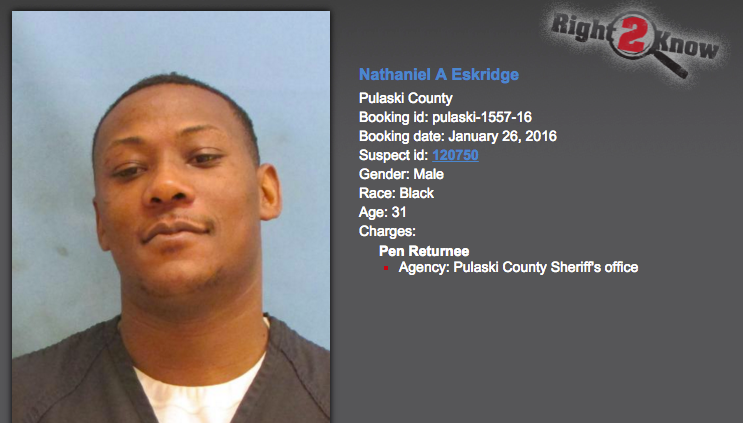 A 31-year-old Little Rock man who said he was the victim of mistaken identity was cleared of first-degree murder charges in 17 minutes Tuesday by a Pulaski County jury.

Nathaniel Antwone Eskridge didn't testify during the one-day trial before Circuit Judge Herb Wright but told Little Rock police that another man he knows, his sister's boyfriend, was the real killer of 44-year-old Cedric Pennington in 2014.

That man, 28-year-old Meco Vontrelle Howard, was arrested in the case but never charged. Eskridge also named another friend as being involved in the slaying, 25-year-old Stanley Dewayne Wilson of Little Rock.

Defense attorney Alex Burgos told jurors that Howard and Wilson more closely fit the description of the killers provided by the only eyewitness in the case than Eskridge did.

But Burgos, with co-counsel Robby Golden, called on jurors to reject the accusation by that eyewitness, Yolanda Dickerson, that Eskridge was the killer, saying the 44-year-old woman had made a "grave" and "tragic" mistake in accusing his client.

Pennington was shot to death in front of Dickerson's home in the Royal Oaks Apartments on Baseline Road by two men who ambushed him as he returned to the apartments after buying beer and cigarettes. He had been at the apartments visiting Dickerson, a longtime friend and sometime girlfriend.

To convict Eskridge, jurors would have to believe that Dickerson had perfect recall to identify Eskridge for police seven months after Pennington was killed.

She'd been drinking and had taken hydrocodone recreationally when the man was killed, Burgos said. He also noted that Dickerson had given police a fake name before telling them her true identity.

Aside from her word, Burgos told jurors, there was no physical evidence to conclusively tie Eskridge to the slaying.

"No fingerprints ... no DNA. It [physical evidence] simply wasn't there, and neither was Mr. Eskridge," the defense lawyer said in closing arguments.

Deputy prosecutor Alexander Betton said Dickerson knows who killed her friend, reminding jurors how she testified about "locking eyes" with the shooter as he took aim and about how seeing Pennington killed still haunts her two years later.

Eskridge gave a 20-minute statement to police when he was arrested, saying Howard and Wilson were involved in the killing. Howard had a .40-caliber Glock handgun that night, Eskridge told investigators.

Deputy prosecutor Scott Duncan told jurors that to believe Eskridge is innocent, they would have to reject evidence that Eskridge was at the scene of two shootings in the same neighborhood -- one of them Pennington's murder -- 10 days apart in which the same gun was used.

According to testimony, police had no suspects for seven months until detectives reviewing shootings in the neighborhood took a closer look at a Feb. 18, 2014, report of shots fired near the Merrivale Drive home of Taquilla Gines, just around the corner from the Baseline Road apartments.

Four .40-caliber shell casings found during the investigation of that incident matched the shell casing found next to Pennington's body, jurors were told.

A former friend of Eskridge's, Potondra Carruth, had identified Eskridge as one of two people who Gines had asked to leave a cookout at Gines' home. Carruth testified that Eskridge had kicked over the grill, spilling the food, and then left the party, only to return with a second person and start shooting.

Sgt. Van Thomas testified that he subsequently showed Dickerson a photograph of Eskridge and that she identified him as the man who killed Pennington.

Eskridge's acquittal does not mean that the defendant will immediately go free. He's currently serving a 20-year sentence out of Sebastian County for robbery, reduced from aggravated robbery. He also has prior convictions in Pulaski County for theft and possession of a firearm by a felon.