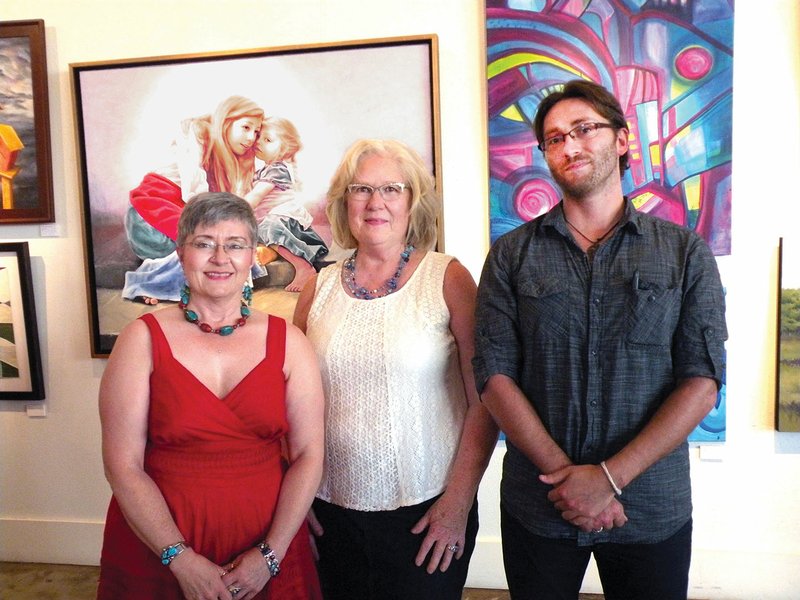 Area artists displaying their works in the Delta des Refusés exhibit at the Thea Foundation in North Little Rock include, from left, DebiLynn Fendley of Arkadelphia, Beverly Buys of Hot Springs and Stewart Fuell of Sheridan.

Three artists from the Tri-Lakes Edition coverage area are among the more than 400 artists whose works were not selected for the 58th annual Delta Exhibition, currently on display at the Arkansas Arts Center in Little Rock.

However, the three are among the more than 80 artists showing their “rejected” works in the second annual Delta des Refusés exhibit now on display at the Thea Foundation in the Argenta Arts District of North Little Rock.

Rachel Trusty of Russellville founded the Delta des Refusés last year and serves as its curator again this year. She said the show is created in the spirit of the original Salon des Refusés (Exhibition of Rejects) held in Paris in 1863. Among the rejected artists of the Paris Salon were Manet, Courbet, Pissarro and Cezanne, all artists whose works are revered today.

Trusty said 1,038 works of art were submitted to the Delta Exhibition, and one juror selected only 52.

“The Delta des Refusés strives to offer an alternative view of regional art and, like the Salon des Refusés, hopes to give legitimacy to artists who were not accepted into the Delta Exhibition,” said Trusty, who is the gallery coordinator for the William F. Laman Public Library System in North Little Rock. “Led by artists and without a juror, the show embraces the ideas of freedom of exhibition and freedom of expression. It hopes to place the power of judgment in regard to taste into the hands of the public.”

Trusty said the Delta des Refusés will be held again next year in June and July, and the call for entries will begin in March. An artist must have submitted work to the Delta Exhibition and have received a rejection letter before he or she can enter the Delta des Refusés. Artists can check social-media outlets such as Facebook, Instagram and Twitter, as well as the website www.deltadesrefuses.com, for more information.

Among the local artists with works displayed in the Delta des Refusés are the following:

• Beverly Buys of Hot Springs is displaying a cyanotype titled Angel in a Thorn Patch (After Carroll Cloar).

Buys is a retired professor of photography from Henderson Statue University in Arkadelphia, where she worked for 20 years. She currently works as a fine-art photographer in her own time.

“I submitted work to Delta des Refusés because it offered an alternative to not showing the work after it wasn’t accepted in the Delta Exhibition,” she said. “I make art to express my interpretation of my subject to an audience; it needs an audience to complete the conversation or experience.”

Buys’ work has been included

in previous Delta exhibitions, including the 2015 show.

Buys is the 2016 winner of the Arkansas Committee of the National Museum of Women in the Art’s annual Polly Wood Crews Scholarship.

“The reference photos for this piece come from exhibits at Crystal Bridges [Museum of American Art in Bentonville] when they were showing works by Andy Warhol and Jamie Wyeth,” Fendley said. “I don’t think Warhol actually ever owned this stuffed dog, but it was included in the exhibit.

“I was fascinated with the taxidermy of the dog. I shot and shot photographs of it. There was actually this little boy looking at the dog, which was enclosed in a big glass case.”

Fendley said her art has been selected for the Delta Exhibition twice, including last year.

“I challenge myself every year to enter the Delta Exhibition, and I will continue to do so,” she said.

“I have been a part of Refuses salons in the past in other venues around the country, and I gladly chose to participate in this one because any opportunity to exhibit is, to me, a good opportunity,” she said. “I oftentimes get overlooked and dismissed as not being a career artist because I have a day job, but art is my career, my passion and my life. So, yes, any opportunity to show that is open to me is an opportunity I am going to take.

“I’m in good company in this show with some of my favorite fellow artists, and that makes me very excited.”

Fendley holds graduate degrees in both art and English from Henderson and finished her Master of Fine Arts degree in interdisciplinary art at Goddard College in Vermont. She has taught art and English at Henderson and art at Ouachita Baptist University. She now works full time as a litigation assistant for a law firm in Arkadelphia.

• Stewart Fuell of Sheridan has an oil on canvas, The Evolutionary Necessity of Plumage, in the show.

“I like the idea of the Delta des Refusés exhibit,” he said. “I am friends with Rachel [Trusty] on Facebook, and that’s how I found out about it.

“I am happy to be a part

Fuell is a 2004 graduate of the University of Central Arkansas in Conway, where he studied studio art, art history, writing and rhetoric. He is a librarian with the Central Arkansas Library System in

“I work at the main library in adult programming,” he said. “I do public service, coordinate events and book clubs, and write and record content for the weekly Radio CALS show.”

Fuell said he primarily works with oils when he makes art.

“I live in the woods with my sons, Elijah and River. They paint better than I do,” Fuell said.

“I am not a professional painter. That doesn’t pay the bills,” he said.

The Delta des Refusés exhibit will remain on display through July 17. The Thea Foundation, at 401 Main St. in North Little Rock, is open from 9 a.m. to 5 p.m. Monday through Friday. More information on the exhibit can be found at www.deltadesrefuses.com.