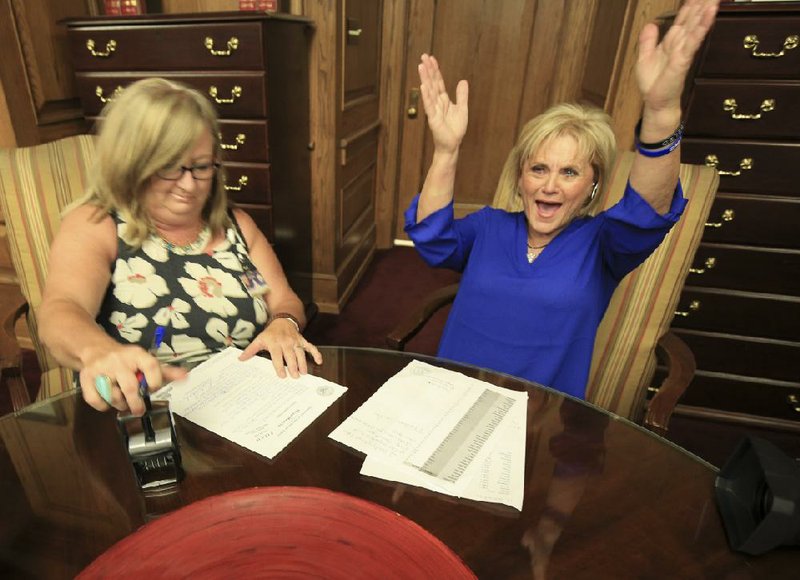 Arkansans for Compassionate Care campaign director Melissa Fults (right) celebrates as Leslie Bellamy of the secretary of state’s office stamps paperwork for petitions that Fults’ group delivered in June in hopes of getting a medical-marijuana initiative on the ballot.

An initiated act aimed at legalizing medical marijuana has been cleared for a popular vote Nov. 8.

Kerry Baldwin, a spokesman for the secretary of state’s office, confirmed that the group did meet the threshold to make the ballot.

But a competing medical marijuana proposal will continue to be a challenge for her group, Fults said.

“We’re not going to give up. We’re going to continue to fight,” she said. “The chances of either one passing with both on there, it’s slim.”

Arkansans for Compassionate Care submitted the petitions, bearing about 117,000 signatures, June 20. Since then, about 40 temporary workers and about 10 secretary of state office staff members have been checking those signatures in Little Rock’s Victory Building.

The group needed 67,887 valid signatures from a variety of counties. Fults said 77,516 signatures were valid.

Arkansans for Compassionate Care was one of six groups — each with a proposed initiated act or constitutional amendment — vying for inclusion on the November ballot. Signatures are due Friday.

David Couch, a Little Rock-based attorney, is backing a rival constitutional amendment that would legalize medical marijuana but is different in its approach.

He has said he will have enough signatures to make the deadline for the Arkansas Medical Marijuana Amendment.

Couch worked with Fults on a proposed 2012 medical-marijuana measure that fell just short of approval by voters. After the election, the two split over a “grow-your-own” provision, and they pursued separate proposals for this election year.

Couch said the state is not ready for the grow-your-own provision. He said his proposal focuses on security.

His proposed amendment does not specify how dispensaries can be run, but it would limit the number to 40 in the state. The Alcoholic Beverage Control Division of the Department of Finance and Administration would inspect the dispensaries.