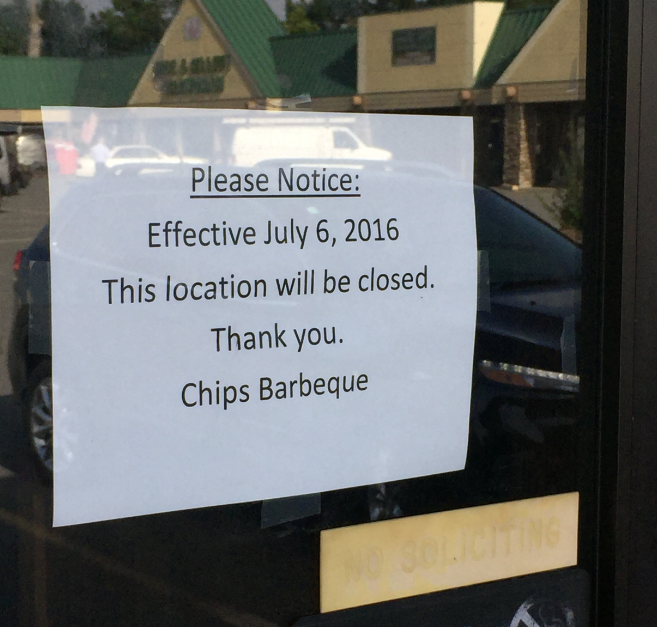 A sign on the door informs Chip’s Barbecue patrons that the restaurant closed on July 6, the same day owner Chris Harcrow filed for Chapter 7 bankruptcy.

Chip's Barbecue, 9801 W. Markham Street, Little Rock, has closed, with a sign on the door stating, "Please Notice: Effective July 6, 2016, This location will be closed. Thank you." At last check the phone -- (501) 225-4346 -- had not yet been disconnected but nobody answered it. The website, chipsbarbeque.com, baldly proclaims only, "Our Markham Street located (sic) is now closed." (If there are any other locations for the venerable barbecue joint, which has been around since 1961, we're not aware of them.) Chris Harcrow, an old friend of the Chipman family, who founded the venerable establishment in 1961, took it over in August 2013 following the 2012 death of paterfamilias Thomas Chipman. Bankruptcy listings for North Little Rock in Monday's paper include this filing: "Christopher Jay Harcrow (dba Honest Integrity LLC), ... July 6, 2016, Chapter 7."

Doug Wilkerson, Capital Smokehouse and Grill's cook and co-owner, died July 1. Before he and wife Candy took over and renamed what had been a downtown barbecue shack called Mr. Mason's Pit Bar-B-Q in 2008 (they added a range of blue-plate lunches consistent with what they offered when they ran the now-defunct Lucky 7 on East Sixth Street), he had served as the team caterer for the Arkansas Razorbacks and "fed thousands of children at Pulaski Academy," according to his July 8 obituary. (Folks frequently asked him if he was a chef; Wilkerson's always modest response, "No, I'm just the cook.") Family members and staff have been pitching in to keep the restaurant, 915 W. Capitol Ave., Little Rock, open, at least so far. The phone number is (501) 372-4227.

The Midtown Little Rock IHOP, 101 N. University Ave. at West Markham Street, has closed for remodeling. A phone company message at the listed number, (501) 664-2014, says it has changed to (501) 954-7737, the number of the west Little Rock IHOP, 11601 Hermitage Road, where we were unable to raise anybody who could tell us how long the remodel will last.

Bash Burger Co., which had been successful as a Saline County-based food truck, didn't make it as a Pulaski County brick-and-mortar. The restaurant in the end cap of the Colonnade Shopping Center, 315 N. Bowman Road, Little Rock, shut down last week and the phone number, (501) 904-2694, has been disconnected.

The McDonald's at 4008 McCain Blvd. at U.S. 67-167, North Little Rock, rebuilt from the ground up in the past few months, opened on schedule at 5 a.m. Monday. Owner-operator Nicole DiMichele, who with father Dean runs DiMichele Enterprise, owner/operator of the McCain Mall outlet and five other McDonald's restaurants in Little Rock, North Little Rock and Sherwood, says the new structure, replacing one built in 1975, is central Arkansas' largest, seating more than 120, and will feature "the latest and greatest that McDonald's has to offer." That includes a dual-lane drive-through (open 24/7) with three windows, digital menu boards and dining room TVs and interactive games. What it will not have: automated ordering kiosks. Dining room hours will be 5 a.m.-11 p.m. The phone number: (501) 758-0400.

Meanwhile, the McDonald's inside Wal-Mart at 12001 Maumelle Blvd., Maumelle, has permanently closed.

One of our sharp-eyed Spa City correspondents has spotted a new sign in front of the former KJ's Grill, 1834 Airport Road, Hot Springs, replacing the one that said "New restaurant opening soon," that says what's coming soon is called Froggys, which according to the smaller print on the sign will feature steaks, seafood and burgers. Though he reported that it looks like it's part of a chain or franchise operation, an online search didn't turn up any other Froggys that matched that description. The voicemail message at the listed phone number, (501) 767-0063, suggests keeping up by "watching our signs."

Del Frisco's Grille, in the Promenade at Chenal Shopping Center, 17707 Chenal Parkway, Little Rock, will host a beer dinner, 6:45 p.m. today, pairing four courses with four beers from Petaluma, Calif.-based Lagunitas Brewery. Brewery representative Courtney Bibb will discuss pairing techniques with dinner patrons and explain the reasoning behind the pairings chosen for the dinner. Seating is limited and they'd appreciate you registering in advance (but you don't have to); cost is $55. Call (501) 448-2631.

And speaking of the Promenade at Chenal, shopping center officials say they're looking at the first week of September for the opening there of Little Rock's second Pei Wei outlet.

Arkansas Online reports a delay in the opening in Conway of the first John Daly's Steakhouse, a new concept built around the career of professional golfer and former Dardanelle resident John Daly, originally set to tee off by this summer. Razing of an existing two-story building at 912 Front St., just north of Toad Suck Square downtown, is expected to get underway this week; construction on a new two-story, 4,500-square-foot structure, which will include second-floor loft space and a private dining area, should begin within two to three weeks, with a Jan. 15 target opening. Meanwhile, two more locations (out of a planned 10 over the next five years), in Little Rock and Northwest Arkansas are pending.