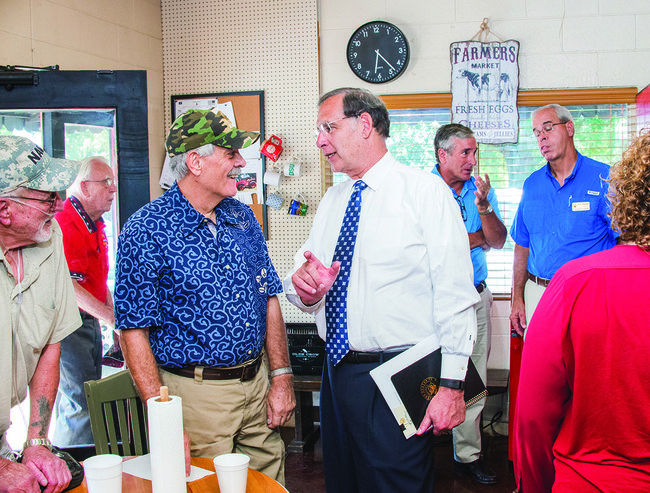 Ron Helton, father to the owner of Olde Crow General Store, talks to Sen. John Boozman as he visits the store in Saline County.

CROWS — Historically, general stores offered more than flour, sugar and butter to their customers. They also offered a place where members of the community could meet and discuss the issues of the day.

Patrons might be seated around a potbelly stove, if the weather called for it, or at a table playing checkers with their neighbors.

A similar scene unfolded Tuesday at the Olde Crow General Store at the intersection of Arkansas 5 and 9 between Benton and Hot Springs Village in Saline County. Suffice it to say, there was no potbelly stove in operation because the summertime temperature climbed toward the 100-degree mark outside on the gravel parking lot. There were no checker games, either, but the excitement ran high as customers, neighbors, friends and relatives of Damon and Jana Helton filled the small store long before the noon hour.

The Heltons operate the general store and raise grass-fed cattle, hogs and, sometimes, chickens, on their nearby farm, processing the meat and selling it at the store, along with other homegrown or homemade items. Damon is also an Army veteran, and he and Jana have taken advantage of several programs available to veterans to help them purchase their farm and start a business at the Olde Crow General Store.

The folks inside the general store were waiting patiently for the arrival of U.S. Sen. John Boozman, R-Ark., who was in Saline County as part of a week-long tour through central Arkansas to focus on veteran and military issues.

“We are so excited he is coming here,” Jana said as she took a break from waiting on customers.

“We want him to know that this is a space for neighbors, veterans to gather and exchange, discuss ideas. That’s been the whole point of our opening this store from the beginning,” she said.

“We have a lot of our regulars here today, but we’ve also invited veterans, members of the Saline County Sheriff’s Office and even some friends from the Secret Service,” she said.

“We’ve also invited some members of the Little Rock Police Department and the Crows Volunteer Fire Department …,” Damon added. “I am a member of that fire department.

“It is so important for him (Boozman) to know about this place. … There are a lot of people represented here. This is not just for us; this store is for the community. A lot of people care about things in this community.”

Boozman entered the store and immediately started working his way around the room, shaking hands with every person there. Many were veterans; some were identifiable as members of the American Legion or Veterans of Foreign Wars or simply retired Army or retired Navy.

Boozman said he was having a “good visit” in Saline County.

“I’ve visited with a lot of veterans, talking about their problems and issues,” he said. “I’ve heard a lot about problems dealing with basic issues such as health care. We’ve talked a lot about doing a better job.”

Boozman serves on the Senate’s Committee on Veterans’ Affairs.

“I’m here now [at the Olde Crow General Store] to talk to more veterans and to talk to Damon, who is a veteran and a farmer, and to hear about what issues he has had,” Boozman said.

“His is a great story,” Boozman said. “As a veteran, he found an opportunity to become a farmer, which is a lifestyle that might fit the needs of a lot of veterans. Farmers work outside, and every day is a little different. … Those are things that might appeal to a lot of veterans.”

“We met in our new office at 209 N. Main St. and were able to show off our new facility, which is easier for veterans to find,” Davis said, adding that the office was previously in the Saline County Courthouse. “Then we walked down to 111 N. Main St., which is a newly restored old building, where we had coffee and doughnuts, and the senator was able to visit with county officials and veterans. We shared information regarding our outreach efforts to assist veterans.”

Veterans and/or their families may reach Davis at (501) 303-5646 or katie.davis@salinecounty.org.

Following that meeting, Boozman and others traveled to Riverside Grocery in Benton, where they had lunch with yet more veterans. Veterans had a chance to ask Boozman questions and hear about the work he is doing as a member of the Senate’s Committee on Veterans’ Affairs.

Boozman said that during his visit with Saline County officials, they discussed the possibility of setting up a veterans drug court in the county.

“We are going to do what we can to assist in that effort,” Boozman said. “The recidivism rate is lower when offenders go through a court like this. … It’s a great vehicle to rehabilitate people with addiction. … It’s certainly a lot better than going to jail.”

As the crowd began to dwindle, Damon said he thought the meet-and-greet at the Olde Crow General Store “was absolutely wonderful.”

“We had such a tremendous outpouring from the community. We had 50 or 60 people, easily,” he said.

“It was great that all of our regulars were here. They come here day in and day out to support us and what we are trying to do to support sustainable agriculture,” he said.

“He wished us all the success in the world and said he was waiting on his piece of apple pie,” Damon said, laughing.