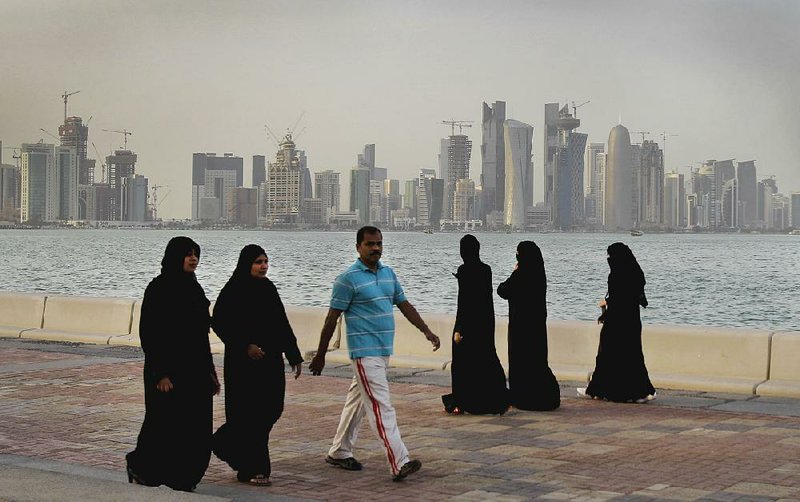 High-rise towers are seen in Doha, Qatar, in this 2012 file photo. An economic slump caused by lower oil and gas prices has led to layoffs in Persian Gulf nations.

DOHA, Qatar -- The economic slowdown gripping countries across the Persian Gulf can be seen in layoffs, slowed construction projects and government cutbacks. For the millions of foreign workers drawn by brighter job prospects, it can have a far darker side if they find themselves deep in debt.

Gulf countries such as Qatar largely don't have bankruptcy laws, leaving laid-off workers on the hook for huge outstanding sums while often banned from traveling outside of the country. That leaves many who are unemployed begging friends and family for help while frantically selling off all their belongings. Others have killed themselves out of desperation.

"It was kind of scary for a while there," said Robert Foster, an American from Beaufort, S.C., who found himself trapped for months in Qatar. "We sold everything we had."

The Middle East has weathered several boom-and-bust cycles over the decades, both buoyed and beaten by the global price of crude oil, as well as the recent recession. In 2009, the financial meltdown in Dubai saw dusty luxury cars parked and abandoned at its international airport and across the city as foreigners fled their debts.

This recent financial collapse began with oil prices falling from over $100 a barrel in the summer of 2014 to bottom out this January to under $30, a 12-year low. In the time since, oil has clawed back to $50 on supply disruptions and lowered reserves, but the damage already had been done in the Mideast.

Among those hard hit was Qatar, a small oil-and-gas-rich country on the Arabian Peninsula where construction accelerated with the announcement it would host the 2022 FIFA World Cup soccer tournament finals. As oil and gas prices sank, so too did Qatar's coffers, leading to layoffs across both private and public companies.

Maersk Oil said in October it would cut as much as 12 percent of its staff in Qatar. Vodafone's Qatar subsidiary announced on May 17 it would cut about 10 percent of its workforce, while mobile phone competitor Ooredoo also made layoffs this year. Al-Jazeera, the nation's satellite news broadcaster, also shut down its American channel in April.

Foster, 50, a former senior operation manager for the state-linked Hamad Medical Corp.'s ambulance services, began work in March 2014 on a three-year contract, hoping to stay for at least six years to make enough to buy a house in the United States. However, he said he didn't receive his first paycheck until three months into his job, which forced him to get a loan of $82,000 to cover his living expenses, debts and child support payments in the U.S.

"A lot of us had to get loans to catch up," Foster said. "And that's where it started, right there."

In January, Foster said his boss called him into his office and laid him off, along with other staff members. Four days later, Qatar National Bank closed his account, putting all he had toward his remaining loan, he said.

"There was no notification. It was just a text that said, 'You're now overdrawn,'" Foster said.

Under Qatari law, foreign workers must apply for an exit permit through their employer to leave the country. When Foster couldn't leave for a cruise he had planned earlier with his wife, he realized he was trapped.

Foster said he put his wife, Pepper, on a flight out, then sold all of his belongings, sleeping at night on the floor of his company-provided villa and hiding his remaining cash in the freezer, fearful he could be arrested as a debtor. He dodged phone calls and knocks at the door while trying to pull together the cash needed to pay off his debt.

"I had to give them my retirement and my dad's retirement to leave," he said.

But Foster said he knew others in far worse shape, including one colleague who even purchased a rope at one point to hang himself. Others have taken their own lives.

A British coroner investigating the suspected suicide of an engineer from Gloucestershire found hanging in his Doha home in February 2015 ruled this March that "financial worries" may have played a part. The case remains open as Qatari authorities provided only "limited information," according to the inquest report obtained by the AP.

Suicides also affect those coming to Gulf countries for work as laborers, taxi drivers and other low-paying jobs. They often pay recruiters back home in Asia or Africa huge sums that take several years to pay off.

India, one of the main countries supplying low-paid workers to the Gulf, saw at least 541 of its citizens kill themselves in the United Arab Emirates in the last three years, according to government statistics offered to parliament in December. At least 337 Indians died in suspected suicides in Saudi Arabia during the same period, while other Gulf countries had annual suicide numbers in the double digits.

In Qatar, 21 Indians alone killed themselves in 2015. The deaths continue into this year.

Information for this article was contributed by Chonchui Ngashangva and Adam Schreck of The Associated Press.