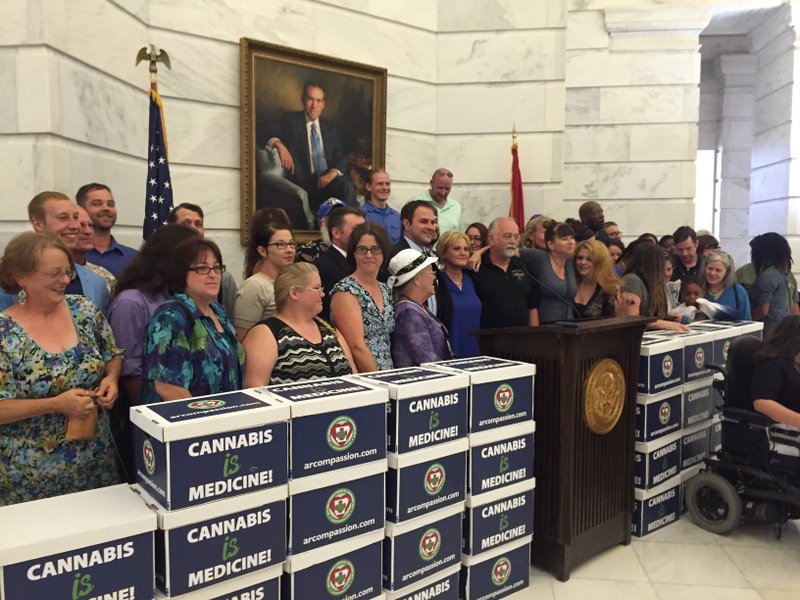 Supporters of the Arkansas Medical Cannabis Act stand with boxes of signatures backing their proposal at a news conference Monday, June 20, 2016.

Supporters of one of three marijuana-legalization proposals submitted more than 117,000 signatures Monday to Secretary of State Mark Martin, pleading that their efforts to legalize the drug will fail if multiple measures make the November ballot.

Immediately afterwards at the State Capitol, groups opposed to recreational and medical marijuana painted all three proposals as a "backdoor" for healthy people to smoke "pot."

Arkansans for Compassionate Care have drafted one of two proposals related to medical marijuana. The group's Arkansas Medical Cannabis Act would set up 38 no-profit dispensaries across the state regulated by the Department of Health, according to its website.

A "hardship" provision in the law would allow people living in rural areas far from the proposed dispensaries to grow up to five plants.

Melissa Fults, a campaign organizer who is also running for a seat in the State House of Representatives, said the group had validated 85,000 of the signatures, which it collected over a multiyear campaign.

Family Council Action Committee President Jerry Cox told reporters afterwards that he was supportive of Fults' "grassroots" organization to collect the signatures, but opposed any attempts to legalize the smoking of marijuana.

He said he was certain Arkansans would not approve either measure.

Before walking boxes of signatures down to Martin's office, campaign organizers and pro-marijuana patients pleaded, tearfully at times, for support on the Arkansas Medical Cannabis Act, which they said would provide relief from pain as well the intense side effects of chemotherapy.

Fults said the two dueling medical marijuana proposals were both nearly certain to fail if they appeared together on the ballot.

"If there are two on the ballot, it will make us fight so much harder," she said. "If we put the two camps together, there is no way we can fail."

Cox said he would rather see neither proposal make the ballot. He said a pushing for a legislative fight to override a successful ballot act would face a tough fight.

Constitutional amendments can only be changed by a popular vote.