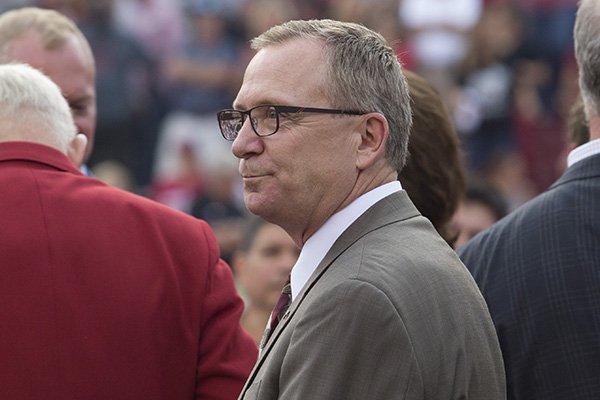 Arkansas athletics director Jeff Long awaits pregame festivities prior to a game against Texas Tech on Saturday, Sept. 19, 2015, at Razorback Stadium in Fayetteville.

FAYETTEVILLE -- The University of Arkansas, for the first time, is operating with an athletic budget exceeding $100 million as it heads into the 2016-2017 fiscal year.

"I think it's the strongest financial position we've had in the history of Razorback athletics," said Athletic Director Jeff Long, who will enter his ninth year at Arkansas in September. "We have had revenues of over $100 million in the past, but this is the first time we've budgeted for it. We expect to exceed budget in revenues."

A public records request filed by the Arkansas Democrat-Gazette showed the department has had a budget of $105,736,950 approved by the board of trustees for the fiscal year, which begins July 1.

The budget includes $5 million to fund the design and pre-construction costs associated with the north end zone stadium project. Another $5 million will be earmarked next year for the expansion, UA officials said.

Arkansas athletics reported revenue of a little more than $101.1 million for the 2014-2015 fiscal year, the first time the school had broken the $100 million level. Revenue is also expected to top that mark for the fiscal year ending June 30.

Arkansas ranked No. 16 in the country in revenue for the 2014-2015 fiscal year in a survey released in April by USA Today that used a slightly different revenue reporting procedure and listed the Razorbacks with just more than $114.1 million in revenue.

Long credited Hamilton and Arkansas coaches for keeping the athletic budget in order.

"Our head coaches have done a fantastic job of staying within budget, and when you can stay in budget, it allows us to strategically plan for enhancements and betterments in our program," Long said. "When you're always having to be concerned about going over, you're less likely to do other projects."

UA trustees voted 8-2 on June 16 to move forward with the north end zone construction, which will add 4,000 premium seats, refurbish athletic department offices at the Broyles Center and provide a new game-day locker room for Coach Bret Bielema's Razorbacks, among other things.

Former U.S. Senator David Pryor, vice chairman of the UA board of trustees, and Cliff Gibson voted against the estimated $160 million project, which includes a $120 million bond.

"Certainly Sen. Pryor is entitled to his views, and he expressed them eloquently," Long said. "I don't get upset with people having a different point of view.

"We tried to provide information that we had to make our decision on why we believed this is the right time. Obviously eight of the 10 trustees agreed with us and so did our president and our chancellor. We feel like we're on very sound financial footing, as we said. We believe we have an outstanding plan put in place. We've prepared for this day. This wasn't a rush to get this out front."

On the day of the vote, Pryor said it is a project that "we cannot justify with all of the priorities that we have throughout our education system."

The largest single revenue item for the 2016-2017 year is conference and NCAA distributions projected at $37.5 million. That figure is up from the projected distribution of $34 million for 2015-2016. The SEC this year broke its tradition of announcing its revenue-sharing totals on the final day of its spring meetings in early June. Herb Vincent, SEC assistant director for media relations, said the revenue distribution numbers will be announced in October after the SEC executive committee approves the final revenue report.

Projected revenue for ticket sales for Arkansas football is $31 million, up from the $27 million of last year. UA officials said that increase is based on several factors, including increased ticket prices for the first time since 2010 for most seats at Razorback Stadium. Prices will go down for seats in the upper deck.

Projected expenses for football are up nearly 2 percent, to just more than $24.2 million. In men's basketball, projected expenses are rising more than 10 percent, up to $8.07 million, largely due to the team's trip for exhibition games in Spain in August.

Long pointed out a projected decrease in revenue in concessions and merchandise, from $1.8 million to $1.4 million. Arkansas dropped its concession prices prior to the 2015-2016 season.

"Many times people talk about what we do for the fans on the higher end," Long said. "This is something we've done for the common fan, as some people refer to them. We've lowered those concession prices. We've lowered ticket prices in the upper deck.

"We're proud of that because we are paying attention to the fans who have less means to spend in this situation."

Another item of note in the budget is a game guarantee of $300,000 for the Razorbacks' road game at TCU on Sept. 10. Arkansas will pay an equal guarantee to the Horned Frogs when they return the football game in 2017.

Arkansas is projected to spend more than $9.8 million on debt service in the upcoming fiscal year after projecting $9.9 million in that category last year.