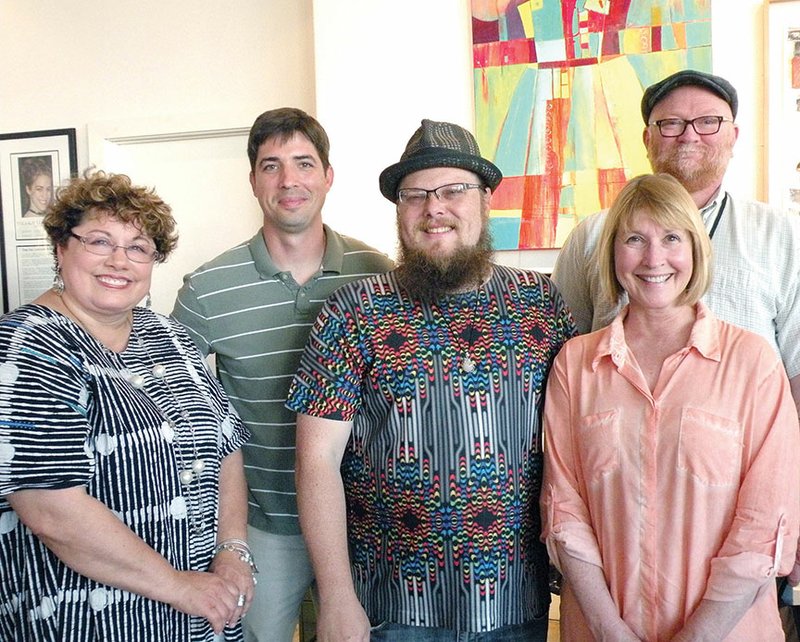 NORTH LITTLE ROCK — Art patrons lined the sidewalks June 17 as they participated in the monthly art walk through the Argenta Arts District in downtown North Little Rock. The Thea Foundation opened its doors for the evening as host of the second annual Delta des Refusés exhibit, curated by Russellville artist Rachel Trusty.

The Delta des Refusés exhibit highlights works by more than 80 Arkansas artists who submitted the same pieces of art to the 58th annual Delta Exhibition, now on display at the Arkansas Arts Center in Little Rock, and had the works rejected.

“I was super pleased with this year’s reception,” said Trusty, who is the gallery coordinator for the William F. Laman Public Library System in North Little Rock. “We had an amazing turnout for the show. Next year, we will most likely have to have two venues in the same vicinity.

“I expect the show to get even larger next year, and I am working out a plan to accommodate it,” she said. “The show will be in June and July again next year, with the call for entries beginning in March. I will announce the call on Facebook and the Delta des Refusés website. I will also email past participants.”

“I am an artist and musician who is self-taught. I have a day job as a mental-health clinician,” Baskins said.

“I am becoming more of an artist every day and am enjoying this process and journey,” he said. “This was the first time I submitted anything to the Delta Exhibition. I am thankful for the opportunity to be in the Delta des Refusés show and for all those involved in making it happen.

“Art is a subjective and personal experience. All art has its merit for personal acceptance or rejection, depending on an individual’s particular tastes and preferences.”

Church is a library associate at the Argenta Branch of the William F. Laman Public Library System in North Little Rock, where the Delta des Refusés was held last year. He said his interest in art and creating visual art is a fairly new endeavor.

“I began to experiment with collage and developed an almost addiction to finding old images, cutting them up, then reassembling the individual pieces into new scenes,” he said. “I am drawn to images that elicit a feeling and anything that depicts the condition of being human.”

• Jason B. McCann of Maumelle is displaying a mixed-media piece called Red Permit Parking Only.

“I think this is a fun show,” McCann said of the Delta des Refusés. “I’ve been in the Delta Exhibition six or seven times (including 2015) and entered even more times. It’s always a letdown when your work is not selected, but I never expect to get in.

“Still, you want to show your work. This show gives you another opportunity to do that.”

“I love entering my artwork in competition. I think it helps validate me as an artist,” Rierson said.

“Usually, I have my paintings selected, but with the Delta Exhibition, … I have not had my paintings chosen,” she said. “That art exhibit is more challenging with a lot of entries. [Submitting work to] the Delta Exhibition gives me a chance to go out of the norm and really express my inner art spirit. This year’s entry was a watercolor self-portrait and how I visualize myself in one of my frightening dreams.

“The Delta des Refusés exhibit was really needed so our art patrons could see more artists’ artwork than the few selected to be in the Delta Exhibition.”

“I displayed Clay, Grog, Wax … Portrait of a Rock in the Delta des Refusés because I wanted additional people to see it,” said Satterfield, who served 10 years as director of the Baum Gallery of Fine Art at the University of Central Arkansas in Conway.

“It’s a new way of working for me, and I hope anybody who has seen it will let me know what they think, or if they have questions about the how or why of it,” she said.

“Also, I wanted to support Rachel Trusty,” she said. “I appreciate her enthusiasm for creating opportunities for artists to share work. It was great to see artist friends at the opening and fun to find out what they had submitted to the Delta Exhibition. There was some great work there — and a crush of people.

“I enter the Delta Exhibition — and other competitive shows — to push myself to create new work, to explore my medium and to assess what I think are my best, newest, most interesting pieces. It’s essential for artists to go through that process. It’s more valuable than being selected, but being selected is nice. I’m delighted about the one time my work was selected for the 47th annual Delta Exhibition in 2004. There’s always next year.”

“Much of my work is focused on the Arkansas landscape, but I often include a lone figure to aid the viewer in sensing a place,” Stone said. “My piece Fishing at Buffalo Point was painted from a photo I took of a local fisherman who was quietly fishing the still waters of the Buffalo River close to Yellville. His gentle and quiet manner greeted the early-morning mist like poetry.

“The reason I am attracted to the [Delta des Refusés] is because of the reasoning behind its original inception and Rachel Trusty’s brilliant idea to play on that tradition,” Stone said. “Because we allow society to dictate the standards for beauty and value, art is well-suited for challenging the status quo. No disrespect to the esteemed Delta Exhibition, but many fabulous artworks do not make it into the show simply because they don’t fit the visual narrative the juror has in mind, or the juror’s preferences are skewed toward particular medias or styles. I am fortunate to have been included in the Delta Exhibition show several years ago (2010), but the Delta des Refusés seems so much more fun.”

• Jim Volkert of Conway is displaying an oil on canvas and wood with brass hand crank and movement. The work is called Uncertain Sun Shot: After Homer.

Volkert retired from work with museums, including the Smithsonian Institute, in 2005.

“Predictably, when I returned to making art, this [museum] background is embedded in my recent work. Some of the objects are machines that sit strangely at the cusp of pivotal art historical moments; some objects are illogical extensions of the idea of the work; some are simply referential bonbons,” Volkert said.

“Each begins with a painting out of the art historical past. Then comes the time to play as I look at, what can the painting (logically or illogically) do? What is the next level of

“This exhibition delightfully continues a long tradition of expanding access to art beyond the constructs of the museum world,” Volkert said of the Delta des Refusés. “I am thrilled to be part of it and hope it continues as the area experiences renewed vitality in the arts.”

The Delta des Refusés exhibit will remain on display through July 17. The Thea Foundation, 401 Main St. in North Little Rock, is open from 9 a.m. to 5 p.m. Monday through Friday. More information on the exhibit can be found at www.deltadesrefuses.com.