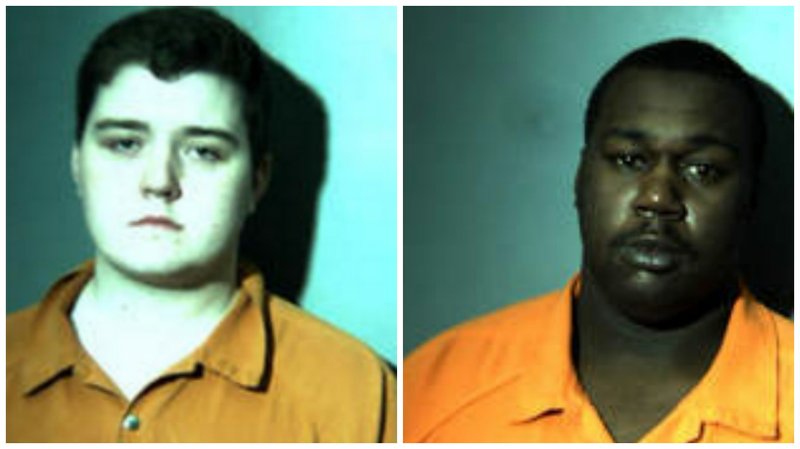 James Ferguson, 18, of White Hall and Lafarius Hoskins, 25, of Conway

Jefferson County detectives arrested James Ferguson, 18, of White Hall and Lafarius Hoskins, 25, of Conway on Saturday after conferring with the prosecutor's office for Jefferson and Lincoln counties, which determined that there was enough evidence to arrest the jailers on suspicion of third-degree sexual assault, according to department spokesman Maj. Lafayette Woods Jr.

A witness said a female inmate stood on a table at the jail and did a striptease. The victim then entered a nearby restroom where the witness said the sexual assault occurred, Woods said.

Department detectives interviewed Ferguson and Hoskins separately before they were arrested, according to Woods.

Both have been placed on paid administrative leave until the completion of the investigation, which is department policy.

In Arkansas, a jailer commits third-degree sexual assault if he "engages in sexual intercourse or deviate sexual activity" with an inmate.

The Jefferson County sheriff's office issued a news release about the jailers' arrests on Sunday about 30 minutes after a post on the Arkansas Democrat-Gazette's Facebook page.

Posts on several local media outlets' Facebook pages accused the department of trying to keep information about the arrests from becoming public.

The postings also offered a more violent account of what happened.

"While this incident, as depicted by some on social media because of speculation and/or their lack of knowledge of the incident, certainly raises questions about Ferguson and Hoskins' actions, it would be premature to draw any conclusion prior to the completion of an internal and/or criminal investigation," Woods said in the news release.

Ferguson and Hoskins were being held at the Jefferson County jail without bail on Sunday.