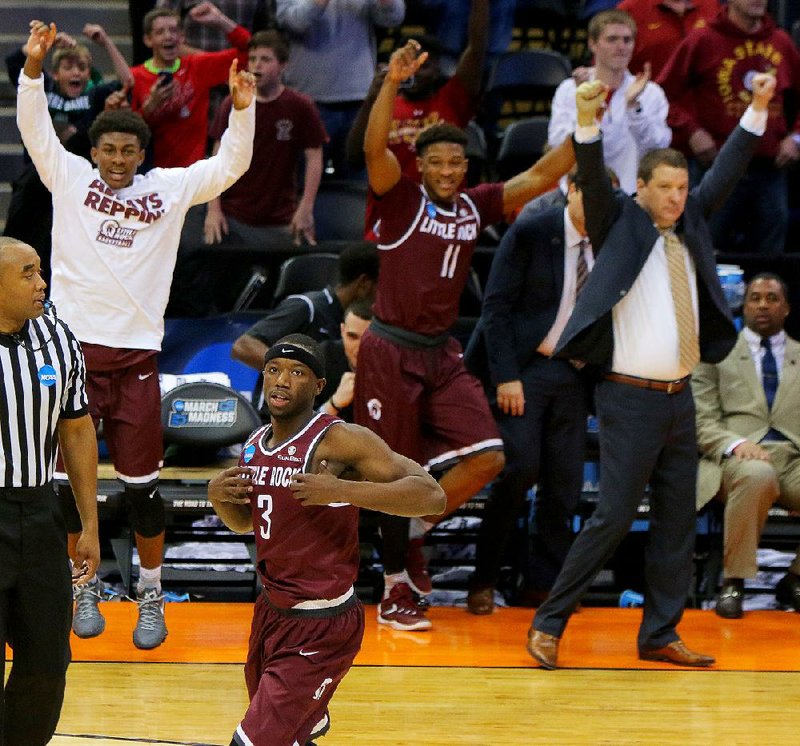 UALR guard Josh Hagins (above) begins to celebrate as his teammates and Coach Chris Beard react on the bench after the Trojans’ 85- 83 double-overtime victory over fifth-seeded Purdue in the Midwest Regional in Denver.

DENVER -- When the final seconds finally ticked off Thursday night, Chris Beard raised his arms, dropped to his knees, slapped the logo at the middle of the floor of the Pepsi Center and looked across the court for his two daughters.

Beard didn't see them in the seats they were sitting in directly across from UALR's bench. The first-year Trojans coach later found out they were taken into the locker room with about 13 minutes to play when it looked as No. 5-seeded Purdue was pulling away for a comfortable first-round victory.

"Whoever made that decision doesn't understand what Little Rock basketball is all about," Beard said. "It's never over, man."

Plenty know now, as No. 12-seeded UALR chipped away thanks to pressure defense and Josh Hagins shooting to erase a 14-point deficit in the final four minutes, then endured two overtimes to put away the Boilermakers 85-83.

As Vince Edwards' attempt from the length of the floor sailed wide of the hoop, the Trojans spilled onto the floor to celebrate the program's second NCAA Tournament victory and first in 30 years. It came after being down 14 points with four minutes left and by four points with 33 seconds left.

Hagins forced the first overtime with a fade-away 26-foot three-pointer with 5 seconds left. The senior, who finished with a career-high 31 points on his 22nd birthday, scored 10 points in the two overtime periods when few players could get a shot to fall.

"Our team, we fight, bottom line," Hagins said. "We're not just one of those teams that's just happy to be here. We believe in ourselves, we believe in our processes, and we came here to win. That's how we play."

The prospect of advancing was bleak as the seconds ticked away in the second half.

UALR (30-4), which plays No. 4-seeded Iowa State on Saturday in the second round, slowed the game to its preferred pace in the first half, limiting opportunities for Purdue's three post players. A.J. Hammons, 7-0; Isaac Haas, 7-2; and Caleb Swanigan, 6-9, combined for 24 first-half points, but the Boilermakers never forged much of a lead.

Hammons finished with 16 points, 15 rebounds and 6 blocks, but Swanigan and Haas combined for just 13 points and 11 rebounds. Purdue (26-9) held a 52-45 rebounding edge, but UALR scored 25 points off 18 forced turnovers.

"Just effort and toughness," said 6-5 forward Roger Woods, who had 13 points. "I've been heavy since I was young. I wasn't going to let no height get involved with the game."

The Trojans took a 28-26 lead on a Marcus Johnson Jr. three-pointer with 1:50 before half, but Hammons scored inside and Edwards, who had 24 points, made a three at the buzzer to give the Boilermakers a 31-28 halftime lead.

UALR players insisted afterward they still believed, even after Purdue started the second half on a 14-8 spurt to take a 45-36 lead with 11:49 left. Purdue, which was 6 of 10 from three-point range in the second half, stretched the lead to 54-42 three minutes later, then to 58-45 on a Raphael Davis three-pointer with 7:11 left.

Finally, when the Boilermakers went up 63-49 on Edwards' three-pointer with 5:00 to go, UALR's winningest season was in peril of ending.

"I thought we had the game in control, and they kept fighting," Purdue Coach Matt Painter said. "You have to give Little Rock credit for being resilient and continuing to battle."

Beard joked later that he considered calling a timeout just to hold a team prayer. Instead, he gathered his team on the bench and pulled out a catchphrase he learned from former Texas Tech Coach Pat Knight, with whom Beard worked for 10 seasons.

The Trojans ratcheted up the defense, pressing the Boilermakers and holding them to just one field goal in the final five minutes -- a Dakota Mathis three with 33.4 seconds left that gave the Boilermakers a 68-64 lead.

But Lis Shoshi's three hit off the rim, then fell through the net to get within 68-67 less than 15 seconds later. Edwards made two free throws with 17 seconds left, setting up Hagins' three-pointer, which he released from the edge of the midcourt logo that reads "March Madness."

"He's got a lot of heart," UALR reserve Maurius Hill said. "I know Josh likes taking those shots. He embraces those moments."

That shot kept the game going, as did Hagins' jumper off the glass with 17.8 seconds left that forced a second overtime. Hagins' floater to start the second-overtime scoring gave UALR a 77-75 lead it would never relinquish.

"We're not done yet," Beard said. "We came to this tournament here to win two games in Denver and try to advance to the Sweet 16, just like everybody else did."