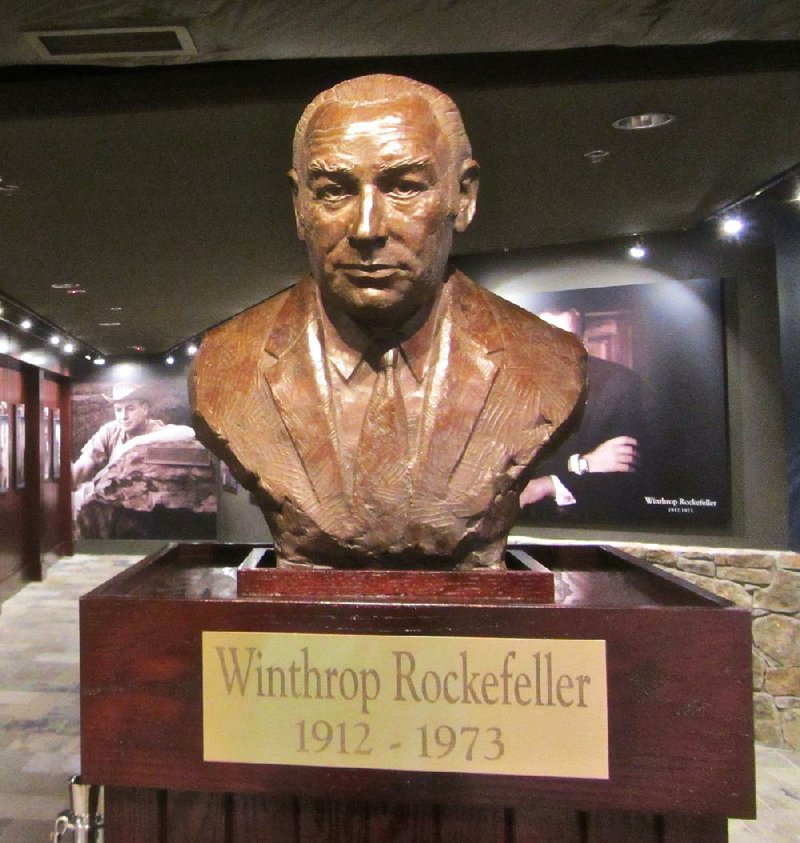 PETIT JEAN MOUNTAIN -- Now that Arkansas has turned into one of the reddest states on the U.S. electoral map, it's hard to imagine that we once went almost a century between Republican governors.

The candidate who broke that drought in 1966 was Winthrop Rockefeller, a public figure so moderate and progressive that today's deeply conservative Natural State quite likely would spurn him.

Arkansas' 92-year reign of Jim Crow Democrats ended when the ultra-wealthy GOP transplant from New York won the election. His victory came at a time when only 11 percent of the state's voters identified themselves as Republicans.

The exhibits, titled "Winthrop Rockefeller: A Sphere of Power and Influence Dropped Into a River of Need," are brightened by more than 300 enlarged photographs. The images portray his life before moving here in 1953 along with the history of Petit Jean Mountain as preludes to a detailed look at his successive two-year terms as governor.

As an exhibit's text reports, "The deeper he was consumed by state affairs, the more he became convinced that the one-party system was the principal roadblock to progress."

That belief led him to run unsuccessfully against Faubus in 1964. Two years later, when he won the gubernatorial election against segregationist Democrat Jim Johnson, "three issues provided the keys to his candidacy: education, highways and employment."

Rockefeller's main achievements as governor are cataloged on an information panel. They included "the adoption of the state's first minimum wage, the tightening of lax insurance regulations and the implementation of a law guaranteeing freedom of information."

"He ordered the Arkansas State Police to close illegal gambling operations in Hot Springs and offered employment opportunities in state government to Arkansas' African Americans. He also focused on improvements in the state's lackluster education program and in the corrupt prison system."

His firm belief in racial equality "was not an issue he felt was negotiable" -- in matters large or small: "Upon taking office, he eliminated the rule forbidding African Americans from eating inside the state Capitol."

The Legacy Gallery's final panel on his time as governor highlights his last act in office -- commuting the death sentences of all 15 men on Arkansas' death row. His ringing statement on capital punishment is quoted:

"I am unalterably opposed to it and will remain so as long as I live. What earthly mortal has the omnipotence to say who among us shall live and who shall die? I do not."

Seeking a third two-year term in 1970, he was defeated by Democrat Dale Bumpers. Continuing to live on his beloved Winrock Farms, he was diagnosed with pancreatic cancer and died at age 60 in 1973.

Also in the institute's main building, the Legacy Theater shows several videos about Rockefeller's life and work. The relocated office from his Petit Jean farm headquarters is on display to provide "a sort of time capsule with many of Gov. Rockefeller's telling personal effects."