Arkansas couple get married in hospital after learning grandfather near death 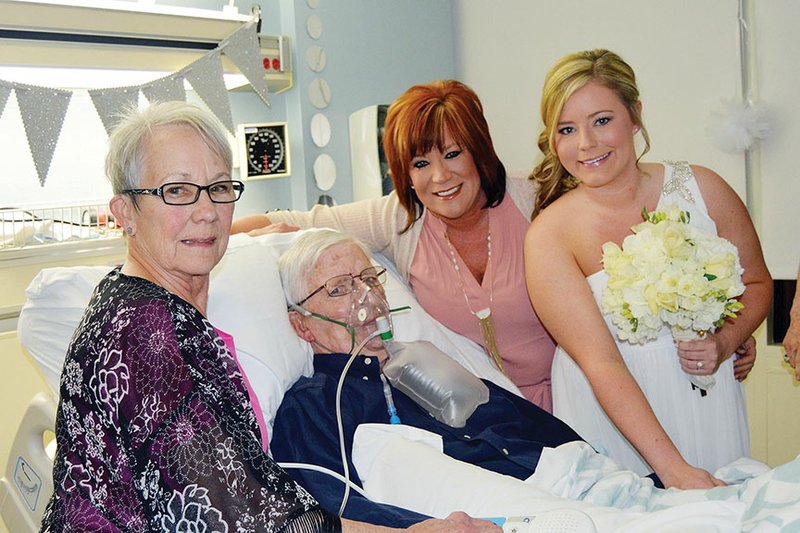 Bride Abigail Bonds of Clinton stands with her mother, Susan Lee-Ward, and grandparents, Marylou Lee and Joe Lee Sr., who died April 17. Bonds held her wedding in her grandfather’s coronary-care-unit room at Baptist Health Medical Center-Little Rock when she realized he wouldn’t be able to attend her wedding in June.

CLINTON — Clinton native Abigail Lester Bonds’ wedding was nothing like she’d dreamed of, but everything she wanted.

The 22-year-old was married April 5 in a coronary-care-unit room of Baptist Health Medical Center-Little Rock, where her grandfather, Joe Lee Sr., was a patient.

“I was there at the hospital — they came in and told us that he needed to start planning his last wishes, and I knew that I couldn’t get married without him there,” Bonds said tearfully.

Bonds, Lee’s oldest grandchild, said she grew up half a mile from Lee and her grandmother, Marylou. “I was over there all the time,” she said. “He is just one of a kind, you know. I haven’t had much of a relationship with my dad, so he kind of filled that gap, and I just was really, really close to him.” She called him Papa.

“We made jelly,” she said. “That was his favorite thing to do. Toward the end of his sickness, he finally got to come home, and it was really important that I learn to make jelly.”

Lee had a valve replacement and triple-bypass surgery in November, Bonds said. She will graduate in December with a degree in nursing from Arkansas Tech University in Russellville, and she helped take care of her grandfather. He was out of the hospital for about six weeks and underwent rehabilitation in Clinton, she said. In March, he took a turn for the worse and was hospitalized, Bonds said.

Susan Lee-Ward — who is Bonds’ mother and Lee’s daughter — and other family members were taking turns spending the night with Lee in the hospital, and Bonds had gone by for a visit when she was told her grandfather was near death.

“My mom was like, ‘Well, I guess you can have the wedding at the hospital,’ and it just all came together,” Bonds said.

Bonds and her then-fiance, Lawson Bonds, 25, also a Clinton native, had planned a small wedding for June 16 at Greers Ferry Lake.

Lee-Ward said that her father’s best friend, Tommy Hall, a pastor, formerly of Arkansas, who lives in Texas, was coming the next day to visit. He had performed the marriages of three of the Lees’ four children and was scheduled to perform the young couple’s ceremony in June.

Bonds said her then-fiance didn’t hesitate when she suggested they get married at the hospital.

“He was like, ‘Yes, let’s do it,’” she said. He contacted his family, including his parents, Bernice and Keith Bonds.

In less than 24 hours, the ceremony was planned.

Bonds said her husband’s sisters, Lindsey Sierra and Kylie Bonds, helped with the arrangements. Sierra loaned Bonds a bouquet that had been used for pictures and ordered a cake. Bonds said her mother had already ordered a short, one-shoulder wedding dress for her, which was still in the package.

“I rushed home and tried it on, and it happened to fit,” Bonds said.

CCU staff members threw themselves into planning, too.

“One — she was a patient-care tech, Katie — went out and had bought decorations and had decorated his hospital room. She even dressed my grandpa up,” Bonds said. “I went in there, and it was like ‘Wow, this was meant to be.’”

That was Katie Fikes

“I got a call from my

supervisor, Chris, who is probably the most caring person ever, and he thinks how I think, and he feels how I feel. He knew this is what I love to do,” Fikes said. “He said, ‘Hey, we’re going to have a wedding,’ and I was super pumped about it, and I said, ‘We’re going to make this

Fikes said she brought a Polo shirt and a tie that belong to her husband, and she got a boutonniere for Lee. She bought lanterns, lots of battery-operated tea lights, and candle holders accented with burlap to decorate

“I just found things that I thought that at Abigail’s age, she would like, and that the family would like,” Fikes said. “I think that Chris could pull it off and get the connections and the OK that we could do it — it was special for a family, especially for a grandfather and granddaughter who were so close.”

Bonds said they waited to have the ceremony until her brother, Harrison Lester, an Arkansas Tech football player, finished practice and could be there.

The ceremony was at 7 p.m. April 5, with about 14 people in attendance.

“My best friend surprised me; she drove in from

Lee-Ward said she walked her daughter down the hospital hallway to her father’s room.

“I walked her in through the CCU to his bedside, and they had a beautiful ceremony,” Lee-Ward said. “He was just beaming with pride.”

“He just had the biggest smile,” Bonds said. “I’ve never seen him cry — he’s not ever been a crier — but there were just tears running down his face.”

”Mom was with him before he went on the vent, and she said one of his last questions was, ‘Is Abigail happy?’” Bonds said.

Ward-Lee said her father, who owned Joe Lee Chevrolet in Clinton, was well-known in several counties. She said 1,000 people attended his funeral visitation.

When Lee-Ward posted the wedding photos on Facebook, “it went viral,” she said.

“To me, it’s just a heartwarming story of a girl and her grandpa,” she said. “It’s

Bonds has photos to remember her unique wedding and the last days with her beloved Papa.

“We planned everything at midnight the night before, pretty much, but it all turned out better than I could have ever imagined,” she said.