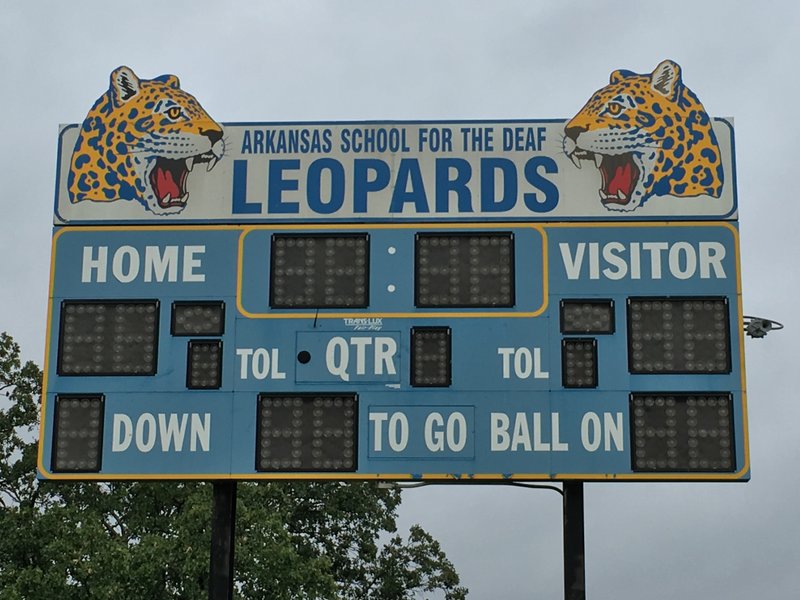 The Arkansas School for the Deaf scoreboard.

Def Leppard will meet the Deaf Leopards on Wednesday, marking the end of a successful petition for the British rock band to show support for the Arkansas School for the Deaf.

Cary Tyson, a program officer at the Winthrop Rockefeller Institute who started the petition two months ago, said the meeting comes with a slight change of plans.

Originally, the petition sought to have the band visit the school for a photo in front of a scoreboard featuring the Leopards' mascot.

“While their schedule doesn’t get them in town in time to get to the school, they’ve agreed to take a picture with the students [and] a large replica of the scoreboard at Verizon Arena,” Tyson wrote of Def Leppard on his Change.org petition.

Since its start, the petition has amassed support from 1,460 signees.

Stacey Tatera, spokesman for the Arkansas School for the Deaf, said the meet and greet with Def Leppard at the band's North Little Rock performance Wednesday night is a "tribute to the power of social media."

Tatera said she is grateful that Def Leppard agreed to use its international fame to provide positive publicity for the school, calling it the "crown jewel of Arkansas."

"We're so proud for anyone to shine a light on our school, on deaf education and on the work we do here," she said, adding her hopes that the photo go viral.

Tatera said about five students from the school will meet with members of Def Leppard backstage and will take a photo with the band in front of the scoreboard replica, a photograph blown up on foam board that she estimated at 5 feet wide.

In March, the Arkansas Democrat-Gazette reported that the school has used the name Leopards since at least 1941, long before the formation of Def Leppard in 1977. Still, the coincidence was something many have found hard to ignore over the years.