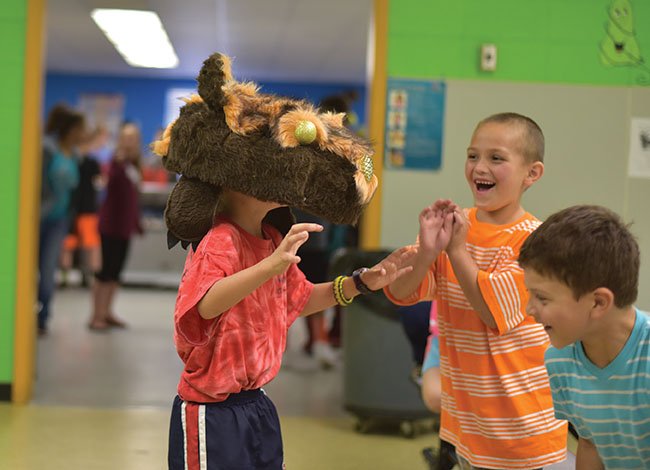 Sessions on theater games, fingerprint art and creative writing took place May 20 across the White County Central Elementary School campus in Judsonia, instead of the school’s typical end-of-the-year field day.

For the first time, White County Central Elementary, a K-6 school, held an Experiencing the Arts Field Day. The school is an Arkansas A+ school that holds a field day each year, and the idea for an arts field day came about when Principal Beverly Froud brainstormed ways to combine the two aspects. Arkansas A+ schools integrate arts into their classrooms.

“As part of the Arkansas A+ network, you then become a member of this group of schools that’s focused on doing school the very best you can for the benefit of the students,” Froud said, “and a big piece of that is arts integration, using the arts to engage students who maybe don’t really love school or who aren’t really captured by the traditional way that school works.”

Students were separated by class and visited various stations set up across the school. Stations were led by local artists, A+ network instructors and the school’s teachers, and the stations included paper making, the spoken word, glass mosaics and more. Froud said she visioned representation from each sector of the arts, and the arts field day took about a month of planning.

Chris James, founder of the North Little Rock-based The Roots Art Connection, recited his spoken-word poetry to sixth-graders and led a discussion on the imagery that could be found in his work.

“Poetry is all about painting pictures with your words,” he told them.

Froud said one student told her that his favorite part of the arts field day was the poetry segment.

“That’s a big deal for a sixth-grade boy to tell you the best thing he’s done all day is poetry,” she said. “And that’s the point, to give them exposure to things they don’t normally engage in.”

In another classroom, Melinda LaFevers, who is on the Arkansas Arts Council’s Arkansas Arts in Education Residency roster, led a station on making scented and unscented paper.

“[Students] got a timeline of the evolution of paper, and we are taking recycled scraps and turning them into sheets of paper,” she said.

Sixth-grader Jacob Huggins took part in theater exercises that included being part of a human knot and playing a game of tag around the gym. Jacob said he likes arts-focused learning and that he wishes the school would hold an event like the arts field day at least twice a week.

“I like how hard it is,” he said. “I like that you have to have teamwork and that we all get to participate, and it’s really fun.”

Eureka Springs-based puppeteer George Meyer presented his self-made puppets and guided students through decorating their own sack puppets. During Meyer’s sessions, students performed a skit with their puppets. Meyer said working with puppets is one way to experience a range of arts.

“It includes so many of the arts — painting, sculpting, performance, voice,” he said.

Froud said that over the past two school years, which is how long the school has been a member of the Arkansas A+ network, classrooms have incorporated arts at the school, which has just under 400 students.

“The biggest difference that A+ has brought to us is a framework for working across and through classrooms,” Froud said. “Our arts teachers

do collaborative planning with our grade-level teachers to help them ensure that they are using the arts in their classrooms in the ways that they teach. And in turn, those arts teachers are utilizing that information from the content teachers in their lessons.”

“We’re constantly looking at what we’ve done and what we can do,” she said. “Already, we’ve had some feedback about what we can do in the future. One suggestion was, ‘Let’s do this one semester and do a traditional outdoor playing-games field day in the other semester.’”

Froud said the one aspect of arts that lacked at the field day was music, and she hopes to incorporate that next year. But the hands-on sessions that did take place at the school received positive feedback from students, she said.

“The more parts of your brain you’re engaging, the more tactile the engagement, the more hands-on the experience, the greater retention of the knowledge,” she said.