PHOTOS: 4 taken to hospital after Little Rock wreck in which 2 vehicles flipped 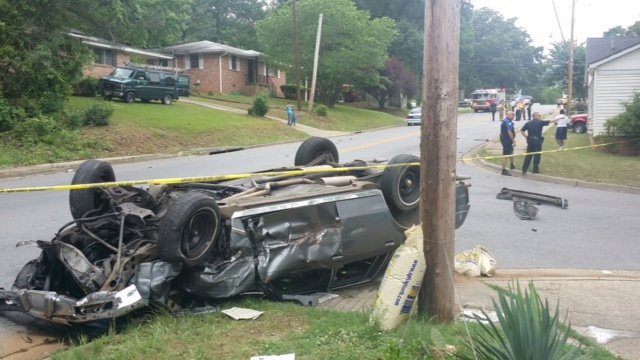 At least one car flipped after a wreck that involved four vehicles Friday afternoon in Little Rock.

Four people were transported to a local hospital Friday afternoon after a five-vehicle wreck in Little Rock, authorities said.

Little Rock Fire Department spokesman Jacob Lear-Sadowsky said a call of a vehicle speeding and striking a number of vehicles at 36th Street and Wynn Drive came into his agency at 2:39 p.m.

When authorities arrived at the scene, he said they became aware of two overturned vehicles — a maroon vehicle on a hillside in the backyard of 3601 Potter St. and a silver Oldsmobile at 36th Street and Wynne Drive. Three other vehicles were also involved in the wreck, though details regarding their involvement were not immediately known.

Identities of all involved in the crash were not available as of Friday afternoon. The extent of injuries to the four sent for treatment was also not clear from authorities responding at the scene.

Police and fire remained on scene as of about 3:30 p.m. clearing the scene and interviewing those either witnessing the crash or having some other form of involvement.

Check back with Arkansas Online for updates on this developing story.